A Call for Unity Amidst the Gab Fiasco 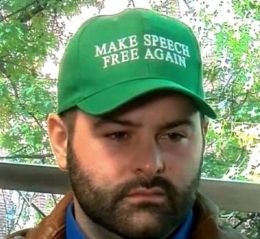 Andrew Torba unwittingly sowed division within the Dissident Right last week by announcing that he will be sponsoring America First’s (AF) real-world conference, AFPAC III. This was highly surprising to those who have followed the esoteric lore surrounding the AF’s decline that I have previously documented. Outside of certain circles such as our own, Fuentes has been propped up on somewhat normie-friendly platforms despite being on a downward spiral. This may be suspect, to say the least, but more importantly it explains why Torba may have been led to believe that America First is the right dog in this fight.

This has led Nick Jeelvy to go so far as to ask if Torba is a turncoat. I can say with confidence that this is not the case. Torba has had many chances to cash out on Gab and give the reins to Jews or controlled-opposition conservatives. The idea that he would, or even could sell out to America First seems almost impossible given his past steadfastness. Besides, what would “selling out” to a relatively powerless and mostly online movement such as AF even look like? No, Andrew Torba has sided with the groypers partly out of ignorance and partly after calculating that the alternative is likely worse. This is a difficult reality that most on the other side are unable to come to grips with.

We all know the gropers’ weaknesses. They are the clan of the Dissident Right with the worst optics, and they act as Fuentes’ own cult of personality. As a top-down organization, however, despite becoming as cringeworthy as those things they swore to destroy, they have at least some potential to become effective. The Fuentes strategy is the same as that of many political extremist snake-charmers and cult leaders throughout history: He is capitalizing off the atomization, isolation, and angst of downtrodden and victimized people for his own power and gain.

Then there are the wignats. Let me clarify one thing: I mean wignat in the original sense of the word, and not in the newer, broader definition that seems to encompass anyone who is not fanatically loyal to Fuentes. The true wignats are insufferable, have bad optics, and are also mentally unhinged. The fact that they have dominated Gab for this long, and yet Torba chose to side with their rivals, says much. The idea that the wignats have somehow reformed and are no longer mentally-retarded skinhead wiggers is simply not the case, as has become apparent after a few hours spent on Gab researching this topic. The groypers aren’t a serious political movement . . . but unlike their rivals, they at least pretend to be.

I wanted to like the wignats, and yet they are simply not likable. They call anyone who is not a wignat (in the original sense) a liberal or Jew, which simply screams “retard.” This has in large part led to groypers mass-blocking wignats so that they don’t have to see their posts. Nick Fuentes is many things, but someone who denies race realism and the Jewish Question isn’t one of them. He was blacklisted for saying that race-mixing is almost equivalent to bestiality and for telling a Holocaust joke, after all.

That being said, the groypers and Fuentes are hardly blameless. Since my original trio of articles, the situation in America First has grown worse by the day in terms of their messaging (hello, optics department?). They have gone from hating women in a pathetic and petulant way to “joking” about rape and the death of white women, especially the wives of “wignats” (perhaps this acknowledgment of wignats at least having wives is a Freudian slip betraying inferiority?).

It is undeniable that modern female insolence is among the greatest problems we face today. The solution, however, is not to make the male dating pool just as insufferable. Furthermore, there are still many relatively trad women, especially those who have been successfully courted by our guys. Those who are on our side but have wisely rejected the incel nonsense are mostly in long-term relationships or married in a world where the average young man is having trouble in the dating market and the average woman is a slut. The groyper attacks on proper women simply for being women are no different than Jews and non-whites attacking whites simply for being white.

This terrible culture which Fuentes fomented by expelling any dissenting voices has led to an echo chamber in which everything that represents bad optics is allowed to run amok as long as its perpetrators are loyal to Fuentes. This has allowed the wignats to give the groypers a bloody nose for the time being. The groypers had planned to waltz into Gab as its new elite caste, approved by the big man himself, and believing themselves to be a much, much bigger deal than they really are.

On Gab’s beachhead, however, the groypers met fierce resistance from the long-entrenched community as National Socialists and Q boomers united to wipe out the woman-hating incel nerd scourge before they could take root. It was a ratio massacre. Online iterations of what I wrote about in “The Groyper Civil War” are manifesting in comment sections all over Gab. Normal, middle-aged QAnon women are joining forces with “wignats” and taking groypers to task for their optics-poor comments, just as they did in real life at the Springfield America First rally.

The entire ordeal has been quite black-pilling. On one side are a merry band of unemployable, mentally unstable children fantasizing about raping the girls who rejected them and using politics and a feigned pseudo-Catholicism as an outlet for their anger. On the other side are low-IQ trailer trash who call everyone who disagrees with them Jews and simply lie outright for the sake of causing drama. One thing that is clear is that the pool of online recruits in our ranks is no better than that of the gullible conservative boomers and the Left’s mentally ill eunuch-lovers. With people like these, we won’t be “RETVRN”-ing to tradition and reestablishing the West anytime soon.

As for Andrew Torba, can we really claim that he is a liberal or centrist for backing the largest far-Right movement in America? While the groypers are largely bereft of quality, they do possess quantity. This is not to say that Nick Jeelvy, perhaps my favorite Counter-Currents contributor, is wrong for questioning Torba’s motives. Far from it. Rather, I believe that there has been a grave misunderstanding all around, and especially on Torba’s part. Fuentes probably induced Torba to support him in part by leaning on his past achievements, such as the “groyper wars” against Turning Point USA and getting a sitting congressman, Paul Gosar, to endorse him before he went off the deep end. Just because Nick Fuentes has turned out to be an anti-social megalomaniac who sees his followers as cannon-fodder doesn’t mean that he is not a reactionary, nor lacking in past credentials.

Fuentes wrote on Telegram that:

People who agree with us 99% of the way but personally dislike me will spend all their time sabotaging and undermining our work instead of doing anything productive themselves. It’s just not right.

I tend to agree with this. It isn’t right. I don’t like Fuentes. I don’t know if he’s a bad actor, but I certainly think he’s troubled. If he is advancing our message, however, there is little need to sow even more division among our ranks. If Fuentes can turn the heat down on the cringe and get his groypers in line, I see no reason for us to cause even more of this division, which only delights our enemies. Besides, Fuentes will likely destroy himself long before infighting does.

Torba is the definition of a good actor and someone we should not subject to our wrath. He has been working on Gab for years and has been harassed for his trouble. He’s a good Christian family man who has turned down offers to sell out in order to maintain a place for free speech, even one that was dominated in its formative years by mentally unhinged wignats and Q boomers. Torba has shown remarkable patience in dealing with these types. He has done more for true and uncensored online discourse than any of us, and he is the last person who should be subjected to guilt by association.

What should be taken away from this debacle is the fact that Torba had reasons for siding with the groypers over the wignat natives, even if some of those reasons are flawed. Those who are of the Dissident Right but who are not groypers have clearly overestimated themselves in the reactionary free market of ideas. The groypers are hated because no one likes a depressed incel loser, but the wignats are likewise hated because no one likes an uppity dreg suffering from Dunning-Kruger syndrome. If the Gab crowd is our non-elite pool of talent, then I say run for the hills and hope the Chekists can’t find you among the pine trees.

This may also be a lesson about people’s willingness to split up over relatively simple matters. If we can be divided so easily despite agreeing on so much, it is no surprise that the mainstream Right and center-Left have been so easily turned against each other by the elites. Much is being said that I fear is not truly meant. I don’t think most groypers truly hate pagans; most of them aren’t serious about religion, anyway. And I believe that most Right-wing pagans respect Catholicism and Orthodoxy as institutions that have preserved the ancient European traditions into the modern day and which have transcendent value. It must also be understood that the most heinous of groypers and wignats do not represent all, most, or even a sizable fraction of their respective sides. When we are pitted against one another, it is easy for divisive statements which few really believe to escalate out of control and cause bridges to be burned.

I would recommend a policy of mutual rapprochement. If the blunt instrument of this groyper mass can be sharpened and put to use, and if both wignats and groypers can mind their tongues and cut down on their respective autism, there is no telling what we could accomplish. This will require an ecumenical council of sorts in which both sides agree to focus on their commonalities, abandon their schismatic dogmas (incelism on one side and purity-spiraling on the other), and officially and permanently excommunicate the subversive bad actors making us all look bad — once and for all.

The creative, innovative youngsters and the experienced salty dogs must learn from each other so that we can have a full bag of tricks on our side for the true struggle. Maybe we should more often ask ourselves, “How does this help our people?” I direct this advice as much at myself as anyone else.

» The Next Supreme Court Justice