In Remembrance of Charles Wing Krafft 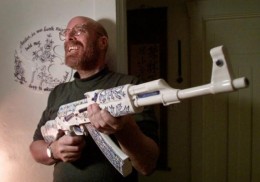 A few words about my friend Charlie. He was like an older brother. There was no falseness about him, and that is what would get him in trouble. He could have faked it and found himself materially better off in the (((self-admiration society))) that passes for art today. But being true to himself he could not be false to others. His “Dark irony” was neither dark nor ironic but “Wesenkrafft”: the essence of Charlie, part of who he will always be to me.

If not money, what was he motivated by? The Prank, well-executed, a jape on the JAP’s among other things. Charlie not only had an intact imagination from childhood, he also had an intact sense of humor from high school. If you look at his work you can see that. Things needed to elicit a smile in both him and his audience, but I think mostly him. All of the projects we worked on had that element of humor. The “what if we glued a coin to the ground in front of a synagogue and watched?” We finally gave up on the glue and decided that a dime welded to a nine-inch timber spike driven into the ground would work best . . .

Of course, we never did drive a nine-inch nail with the Kosher Roosevelt on it into the ground. It was a thought experiment during one of our many conversations. But talking about such things was a source of joy for Charlie.

Charlie was a connector, with people sure, but more like dots, at least for me. Before I met Charlie I read Counter-Currents and a few other sites on the internet. After, well the only way I can really do justice is to use an orbital mechanics analogy. So, you are tooling around in space not really getting anywhere, and then you encounter a significant gravitational mass that flings you off in the right direction. Now you are getting somewhere; now you are not wasting your effort and time.

It is nice to have people like Charlie available to point out the difference between the two until you eventually get good at doing it on your own. He himself was a gateway. Charlie was able to tell me about podcasts, websites, movies, and books I would have never found. If I could go back, I’d take some photos of his bookshelves. I purchased those he recommended, but I am sure there were more. He told me I should go to Macleod’s books when I was in Vancouver, which I did and trekked about three kilometers to my friends’, who I was staying with, carrying a large duffle bag past all of the Chinese people, and then the drug addicts, with my treasure. Two days later, I crossed back across the border with all the Chinese people. Without Charles Krafft, no treasure.

Because of him, I have a clearer idea about how a man can affect positive change in our world.

Do please read what you can about him. There are videos about him to watch to give you a fair idea about who he was. But the best is to listen and read his own words.

One final thing that I would like to leave you with: Charles Krafft’s special popcorn recipe, which I like to call “Kraffty Korn” or maybe Maïs éclaté de Charlie, Maïs soufflé de Charles:

On the popcorn spray some Bragg Liquid Aminos.

Shake the popcorn, spray some more.

You could modify it by adding some brewers yeast for a cheese flavor with vitamins.