An Excursion in Pop Epistemology 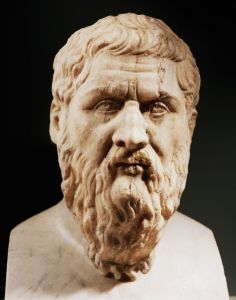 Epistemology: “Epistemology is the investigation of what distinguishes justified belief from opinion.”

I write a lot about “beliefs” — their consistency, validity, and power. But I’ve recently been tilting toward Gorgias’s take on knowledge, especially the “it can’t be communicated to others” part. This also made me wonder: how many of my own beliefs are “justified?” That question put me into a serious funk because after about ten minutes of reflection I drew the following conclusion: About ninety percent of my beliefs fall short of “justified.” They’re just plain “opinion.” So, in the spirit of invidious comparison, being the thoughtful, critical thinker that I am: what percentage of justified belief forms the world view of the “average” adult American, someone who for the most part has relinquished reading serious books (or any books) and magazines for ESPN, History Channel, Netflix, CNN, and Fox News? Let’s be generous at four percent.

The range of “information” and opinion in which we are almost completely reliant on Big Media is frightening. And yet notice how whenever it touches on something about which you have direct personal experience, how wide off the mark it invariably proves to be. The sheer quantity of “information” coming at you in the modern world takes a great deal of intellectual effort to process properly. It is easier to just let it wash over you. Eventually it becomes a quicksand and it sucks you in. In times past people may have known only what was going on in their own neck of the woods, but at least they knew it intimately, which provided a reality check.

Big Media (BM) is a huge cog in an interconnected system of complex specializations that arranges and manages our worldview. BM is happy to relieve you of any “intellectual effort.” “We think, so you don’t have to” is their motto.

The key word to brood about is “specialization.” Specialization means specialists, experts, who say they should run the show because they know more than the non-experts. How often is the expression “experts say” the entirety of an argument given for some manifestly stupid, outrageous declaration of “truth” in the pages of a national opinion-shaping rag like the NYT? The more experts, the more the helpless dependency on their mastery of the arcane rules of the “systems” in which they navigate. We give up our freedoms. They eagerly take possession of them. The less we think, the more we do what they tell us to do. Dependency is the order of the day. Its trajectory is steadily upward. Which means that we are hostages to the experts. Much of what we believe, our opinions, are hand-me-downs from above. You might say then, that our epistemological world — our belief-world — is highly authoritarian. We believe what we are told by the experts. “Justification” of our beliefs becomes a matter of trust.

Last year, what seemed like overnight, most Americans slapped masks over their faces, scurried about in public like frightened rodents, shut down their social world, and watched the economy crash because they trusted the experts who told them that if they didn’t, they would die. Given the track record of these “experts” whose “expertise” is focused on power maximization and wealth accumulation (From Forbes: “US billionaires collectively increased their total net worth by $1.1 trillion during the last 10 months of 2020; and 46 people joined the billionaire class”), one might rightly conclude that there was little justification for trusting the truth of what they were telling us to believe. Yet. . . .

Two thousand years ago, a Roman poet, Decimus Junius Juvenalis (Juvenal), posed the question that still confounds us: “Quis custodiet ipsos custodes?” “And who will guard the guardians?” Juvenal was well-positioned to cast doubt on the good intentions of Rome’s guardians. Born in the first century AD, this brilliant satirist was witness to the ostentatious corruption and the moral decadence of the early Roman empire, a spectacular Imperial Titanic that was slowly on its way down.

The quest for trustworthy guardians (experts, if you will), as Juvenal was leading us to understand, is a fool’s errand. Contemplating the behavior of guardians — as they come and go — across the two millennia post-Juvenal confirms it. One of the bitterest lessons of predictable guardian perfidy is that of the strong correlation between a high degree of virtue-signaling in aspirant guardians and the corruption and coercion that follows them into power. “Put me in charge: I’m morally superior to the current ruling class thugs. You’ll be better off. Trust me!” Robespierre, Lenin, Castro, Pol Pot are a few names that immediately come to mind.

Remember in the Fall of 2008, Obama modestly claimed that his coming reign was “the moment when the rise of the oceans began to slow and our planet began to heal. . . ?” Instead, we got a cult of personality along with a Juan Peron, Caudillo-style junta: “We’re gonna punish our enemies, and we’re gonna reward our friends,” as Obama, dropping his Gs in a rare unscripted moment, promised. He sicced his enforcement apparatus (the IRS) on his political opponents and stoked black racial grievance-mongering to new heights.

This brings us back to our current state of affairs and the hen house we inhabit that our guardian foxes keep insisting is “our democracy.”

Democracies only work with an “informed” citizenry, thus we are told. Indeed, we are “informed” — as in subject to the 24/7 propaganda organs of Big Media. Those who express skepticism about the latest agitprop become “enemies of the people,” nefariously motivated, evil people, so designated because they dare question the wisdom of the guardians. Such “enemies” turn out to be highly useful for the guardians, since they enhance the guardian’s sculpted image of virtue and selflessness. Without the threat of a “wicked” unprincipled opposition to be constantly reminded of, their “goodness” and devotion to justice and equality might become underappreciated, questionable, perhaps even disputable.

Moralism, you see, is the modus operandi of the BM’s propaganda organs. It disguises the self-interest and the tinge of fanaticism that motivates the guardian class and serves to legitimize its usurpations. Thus, the invention of “moralizing cover stories” always involves the targeting of evil opposition forces for dramatic contrast. Repression and censorship euphemized as the protection of “our democracy” from people who “hate” makes the bitter medicine of coercion and arbitrary enforcement of the law go down more easily.

This is particularly the case in a social order where the citizens once enjoyed the protections of impartially enforced laws and regulations. The invention of moralizing cover stories comes into play first in order to override expectations of impartial rule enforcement. Second, they are necessary in order to prevent a widespread and legitimate backlash against the application of force that benefits a favored constituency of the rule enforcers and signals the unfairness, the illegitimacy of the action.

The moralizing cover stories gain ascendancy and ultimately domination over public perception through constant repetition by the propaganda organs of the guardian class. In the US, “racism” remains the archetype achievement of coercive moralizing — “undoing the wrongs of the past” is the guilt-premise to give it leverage. “Racism” has been a “work in progress,” each new “improved” version, to use the metaphor of software upgrades, delivers more “functionality” — each “enhancement” invariably magnifies the virtue of the oppressed and ups the guilt of the oppressor. To continue the metaphor, one might say that “systemic racism” is the most robust software upgrade in years.

“Racism” has “covered” a decades-long succession of guardian-supported assaults on one racial group to benefit another one. Affirmative Action, forced bussing of school children, compulsory reeducation/indoctrination sessions are just some examples that have paved the way to our current situation where on the one hand, the government declines to use law enforcement against black criminality because it is “racist.” On the other hand, the authorities are declaring war on “wrong think,” a species of criminality committed only by white people.

How do moralizing cover stories such as “systemic racism” become entrenched “belief systems,” widely embraced in spite of their flaunting disregard of the realities of human experience? And, in spite of their use to justify outrageous preferential treatment and arbitrary enforcement of the law?

These are the metapolitical questions of our era, as it seems now that ideologically motivated, moralized abstractions dominate every aspect not just of politics but of much of our social life and the administration of universities, corporations, and governing bodies. Imitation chases success. “Racism” has been high yield, and in its wake “sexism,” “homophobia,” “transphobia,” “toxic masculinity,” “white privilege” — an explosion of pernicious abstractions that are instruments of social manipulation and control. The intrusion by them into our collective vocabulary is imperceptible and insidious, and when firmly in place, they function as weapons. Simply the suggestion that any of these are in play is usually sufficient to extort the desired compliant responses from anyone targeted. These will range across the spectrum of coerced submission, from the symbolic, groveling apology to self-lacerating confessions to flagrantly discriminatory policies, i.e. Affirmative Action, to the transfer of material assets, as in reparations.

A century ago, Ezra Pound admonished aspiring poets to “go in fear of abstractions” if their poetry was to be a powerful voice of truth and beauty. Pound’s admonition should be extended beyond the poets. It should be embraced by those of us determined to resist the multicultural barbarians who have made “white guilt” the central sacrament of their anti-racism religion. Pernicious abstractions compose the language of this religion. They are used by the guardian class and their agents to manipulate us and encourage us to believe that our experience of subjugation is the inevitable outcome of a morally justified, correctional process, the resistance to which is further evidence of our guilt.

To resist the depredations of the guardians means that we must reject the language that they use to demoralize us. In the spirit of Ezra Pound, we must use their abstractions only to ridicule them, to dispute them as words that have no serious meaning or defensible application. Always put them in scare quotes. Never bother to deny that they apply to you. To deny that you are a “racist’ means that you accept the concept of “racism” as a serious moral problem. By using their language, you submit to their control. Refusing their language is the first step toward refusing to recognize their legitimacy and diminishing their power.

Thus, the counsel of H. L. Mencken: “The only cure for contempt is counter-contempt.”

« The Political Theology of the New War on Terror