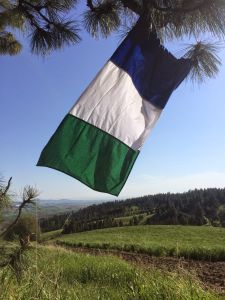 America stands as a foreign land to many white Americans. It’s ruled by a hostile regime that worships blacks, hates whites, and imposes cringe upon the planet. Elections seem to be wasted efforts as the situation grows direr by the year. Donald Trump was President, yet America became more anti-white during his term. Many on our side have argued for years that the current system is hopeless and the only solution is secession. This idea is all the more attractive in light of recent events.

But one voice from the past would counsel against this idea. Sam Francis, the famous paleoconservative theorist, wrote against secession in an American Renaissance essay 26 years ago. In “Prospects for Racial and Cultural Survival,” Francis argued for whites to take America back instead of ceding it to our enemies. Some of his arguments stand up better than others. Regardless, it’s worth listening to Francis on a subject that still bedevils the Right.

Francis’s argument was built on several points. One of his more compelling arguments was that white Americans are too patriotic to want to separate from America. Their identity is bound with the nation and they know no other. “For defenders of the white race and its heritage to adopt this strategy at this point would simply increase their problems because it would place them in antagonism to the patriotic and nationalist loyalties of most of their fellow whites and would allow their enemies to brand them as literally ‘un-American,’” Francis wrote.

He also argued that white separatists “would be forced to give up appeals to [America’s] history, its traditions, and its interests as a nation.”

We could no longer cite the words of Jefferson and Lincoln (and other American statesmen) on racial matters; we could no longer invoke the U.S. Constitution as an authority; we could no longer argue that immigration threatens our national interests because there would be no nation to have interests; we could no longer mention the settlement and conquest of North America by whites, if only because we would have confessed that that settlement and conquest have been failures from which we are now running as fast as we could. By consenting to national disintegration and separatism, in short, we would have to start all over in the project of constructing a culture, a country, and a political order. If only for practical reasons, it is much easier to stay with those we already have than it is to invent new ones that do not exist save in the mind’s eye.

Some on our side may feel this is a necessary sacrifice to make. If all that history, traditions, and national interests led us to our current predicament, what’s the point in sticking with them? Francis offers a rejoinder to that: there isn’t an identity to supplant American national identity for whites. White racial identity is the “thinnest possible reed” to base a society on.

Race, as it is understood today in scientific terms, is largely an abstraction, and while it serves to explain much about society, history, and human behavior, it remains too much of an abstraction to generate much loyalty or motivate much action. The skeleton of race acquires concrete meaning and generates concrete loyalties only as it takes on cultural and political flesh, as race becomes tied up with community, kinship, nationality, territory, language, literature, art, religion, moral codes and manners, social class, and political aspirations. It is precisely such accretions that convert the biological abstraction of “race” into the concrete category of a “people.”

He also noted the obvious fact that whites boast very little racial solidarity. They aren’t likely to see themselves as whites, much less start a nation where this is the sole principle.

Francis pointed out other shortcomings in the secessionist strategy. For one, what areas would whites take in North America? How about the blacks, or the Hispanics? Would we all agree to a clean break? Francis believes these separate zones wouldn’t remain separate for long. Whites would desire cheap non-white labor and let minorities in. The black ethnostate would quickly collapse and require whites to save it. Moreover, most non-whites would prefer to live in the nice whitopia than in their own shithole countries. Third-world immigrants flee to America for a reason. He also argued that the Faustian spirit of the white man would not keep him content within his own apportioned borders; he would desire to conquer the other lands as well.

Francis found white separatism to be a gimmick to fit in with the liberal zeitgeist, claiming many of its adherents cling to it to avoid the accusation of white supremacy. “In this respect, white separatism is somewhat analogous to neoconservatism, which also seeks to avoid invoking more radically anti-liberal ideas and values in order to make itself acceptable to the dominant liberalism,” he wrote. “The flaw of both separatism and neoconservatism in these respects is that they do nothing to challenge liberal premises but try to work within the framework established by liberalism.”

Francis countered separatism with his idea of “reconquest.” According to the paleoconservative, whites must “formulate a white racial consciousness that identifies racial and biological endowments as important and relevant to social behavior, and their own racial endowments as essential to the continuing existence of Euro-American civilization”; “counter the demographic threat they face from immigration and non-white fertility and whites’ own infertility”; and “correct the political and legal order to end the political power of non-white minorities and their white anti-white allies.”

This is a simple platform that a political party could run on. It works within the system to restore America to its rightful owners. It can win over curious whites who oppose the formation of a new nation.

But is it still relevant to today’s world?

Identitarians need to understand they can’t invent an identity out of thin air. White Americans don’t see themselves in World World II cosplay or the pre-Vatican II liturgy. Nor do they see the color of their skin as a sufficient identity. A nation must be built on culture, history, and traditions that already exist. We cannot hope to invent new ones or impose foreign ones on our own people. Appealing to Thomas Jefferson is a better pitch than quoting Julius Evola. (Not that there’s anything wrong with quoting Evola, in the proper context.) American Identitarians must understand that we are Americans, for better or for worse. We cannot LARP as interwar European fascists and pretend we will create the Fourth Reich in Montana. That’s just not going to work in the New World.

Whatever course we take, it will have to appeal to actual white Americans — not the fantasy people we imagine as our own.

But there is a danger that Francis doesn’t acknowledge in continuing ourselves with the American nation. While the true history, traditions, and culture of America are ours, the current America is certainly not. The institutions that shape and define our nation are implacably hostile to us. America — according to the military, the intelligence community, the universities, and every corporation — is a nation of immigrants. It’s also an idea, not a nation, and any human being can be an American so long as they accept the idea. This is the America of our day.

Unfortunately, much of American identity is bound up with the state and the national institutions. There isn’t an independent folk culture, such as one maintained by the Croats under Turkish and communist rule. Patriotism, for most Americans, means saluting the troops and respecting the institutions, even if they hate your guts. This patriotism was exploited to invade Iraq and is now weaponized to justify the persecution of Trump supporters who entered the Capitol without permission. A folk nationalism would see itself in the protesters, not the building they “invaded.”

While the kind of secession Francis argued against may not be wise, it is necessary for some degree of separation between us and modern America. A mental secession, you could call it. Our people need to see themselves as not represented in the state. We need to cultivate an identity that separates us from our corrupt institutions. This identity will be built on America’s traditions, culture, and history, but it will successfully secede from the Empire of Nothing.

Secession is still an idea worth discussion, but we need to be realistic. Francis offered us a path to win over ordinary Americans. The primary mission isn’t whether to separate or take back — it’s to wake up white Americans to their plight. Once that’s accomplished, then we can figure out our ideal state.