Bonfire of the Shorts 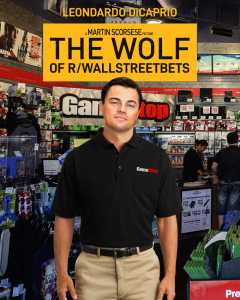 If you’re new to high finance, then the concept of “shorting” is bizarre and convoluted. People actually make money from stocks falling? How is this possible? Why is it legal? Does this contribute anything to society? Am I missing out? Here’s how shorting works.

Let’s say you have a neighbor who is a cat lady that collects Beanie Babies. She has one prized beanie called Roary the Lion, worth $5000 (according to the intellectual darkweb, where these things are traded). Unfortunately, she’s got some bills coming due this month and she doesn’t want to be forced to sell Roary. So you offer to borrow Roary from her for 3 months in exchange for $200. She’s happy, because she’ll get her doll back in a few months and she now has enough money to cover her bills. The second you walk home with the beanie, you go online and sell it to the highest bidder. You manage to get the asking price, $5000. Now fast forward 3 months. Suddenly Beanie Babies aren’t worth as much as they used to be. You see a mint condition Roary the Lion for sale at only $100. You buy it, and give it to your neighbor. Done deal. It’s not the same doll your neighbor loaned you, but she can’t tell the difference. So during this whole process, you’ve only shelled out $300 and you’ve made $5000, for a total profit of $4700. Your neighbor would have lost the value of Roary anyway because of the market crash, but at least she got to use that $200 to pay her bills. This is shorting.

In the world of stocks, shorting is fairly common. You can find daily updates on the “most shorted” stocks, and see that hedge funds and individual traders are regularly making and losing millions of dollars by finding distressed or scammy businesses and shorting them. Occasionally short sellers will provide the markets with a valuable service — they will hire private investigators to go spy on businesses to make sure they are telling the truth about their operations. Sometimes the investigators will uncover major fraud, so the hedge fund will heavily short the company — sending a signal to other market participants: “Hey, check this out. It’s overvalued.” This is what some shorts attempted to do with Tesla. They flew drones over Tesla’s factories and storage lots, and reported that Elon Musk was hiding a bunch of unsold vehicles. This wasn’t exactly true, but the Elon-haters wanted it to be true, so they went with it. Tesla became one of the most shorted stocks of all time, forcing the price lower and causing Elon major headaches on top of his struggles with Twitter and the SEC. But the Tesla diehards believed in the company and trusted that demand for the vehicles would materialize eventually. When Tesla unexpectedly posted a quarterly profit, everything changed. The stock rocketed higher.

GameStop sitting amongst Tesla and Amazon after reddit users make it a Fortune 500 company pic.twitter.com/AVUtcjs6gl

This brings us to another aspect of shorting that is a bit more interesting (and explains why it’s so dangerous). Let’s say you borrowed a bunch of Tesla shares at $400 and immediately sold them because you expected the price to fall soon. But instead of falling, the price starts to climb. You are contractually obligated to buy these shares back before a set date, so you are sweating bullets. The higher the price goes, the less sleep you get. The only way for you to cut your losses is to buy the shares back immediately. But if you’re stubborn, you won’t do this. Surely the market will realize Tesla are liars, right? There’s no way electric cars are really that popular. If you went long Tesla (just buying and holding shares), your potential losses are limited to what you invested. So there’s a cap. But when you short, you could lose far more than 100%. Remember that you only paid a small fee to borrow the shares, you didn’t actually buy them. To close your short position, you have to buy the shares back, and that adds to the existing demand for the stock, which drives its price even higher. It’s like an insidious trap that clamps down harder on your foot the more you struggle. This is called a “short squeeze.” It can create a cascading effect where one unfortunate short buys back shares, forcing the price higher, which destroys another short above him, forcing the price even higher, destroying another short above him, and so on.

Melvin Capital and Citron are the same folks who tried to kill Tesla $TSLA. @elonmusk is the greatest entrepreneur of our generation. He’s trying to save Planet Earth with sustainable energy and bring humanity to Mars. They almost got him. Glad Wall Street Bets is hitting back. 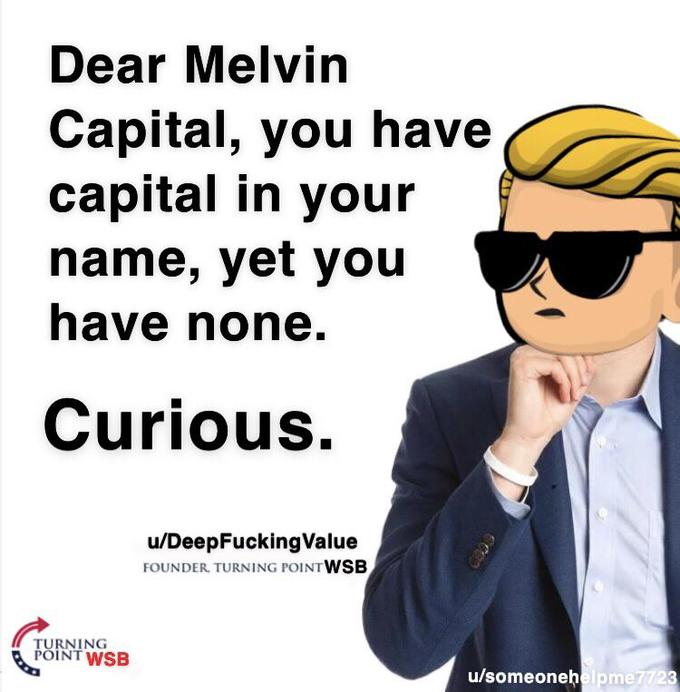 That’s what happened with GameStop. A ragtag group of Reddit daytraders called /r/WallStreetBets found an illiquid stock and noticed it was loaded up to the rafters with Minecraft TNT (shorts). So they set it on fire. It didn’t require a lot of money to make this happen, because GameStop is a small company and its market was thin. The price immediately shot up, forcing shorts to buy. The hedge fund Melvin Capital was in the eye of the hurricane because they bet billions on GameStop’s demise. The final amount of losses is not yet known, but it may exceed ten billion dollars, which could put Melvin’s Jewish founder Gabriel Plotkin out of business.

Here come the shorty apologists
Give them no respect
Get Shorty 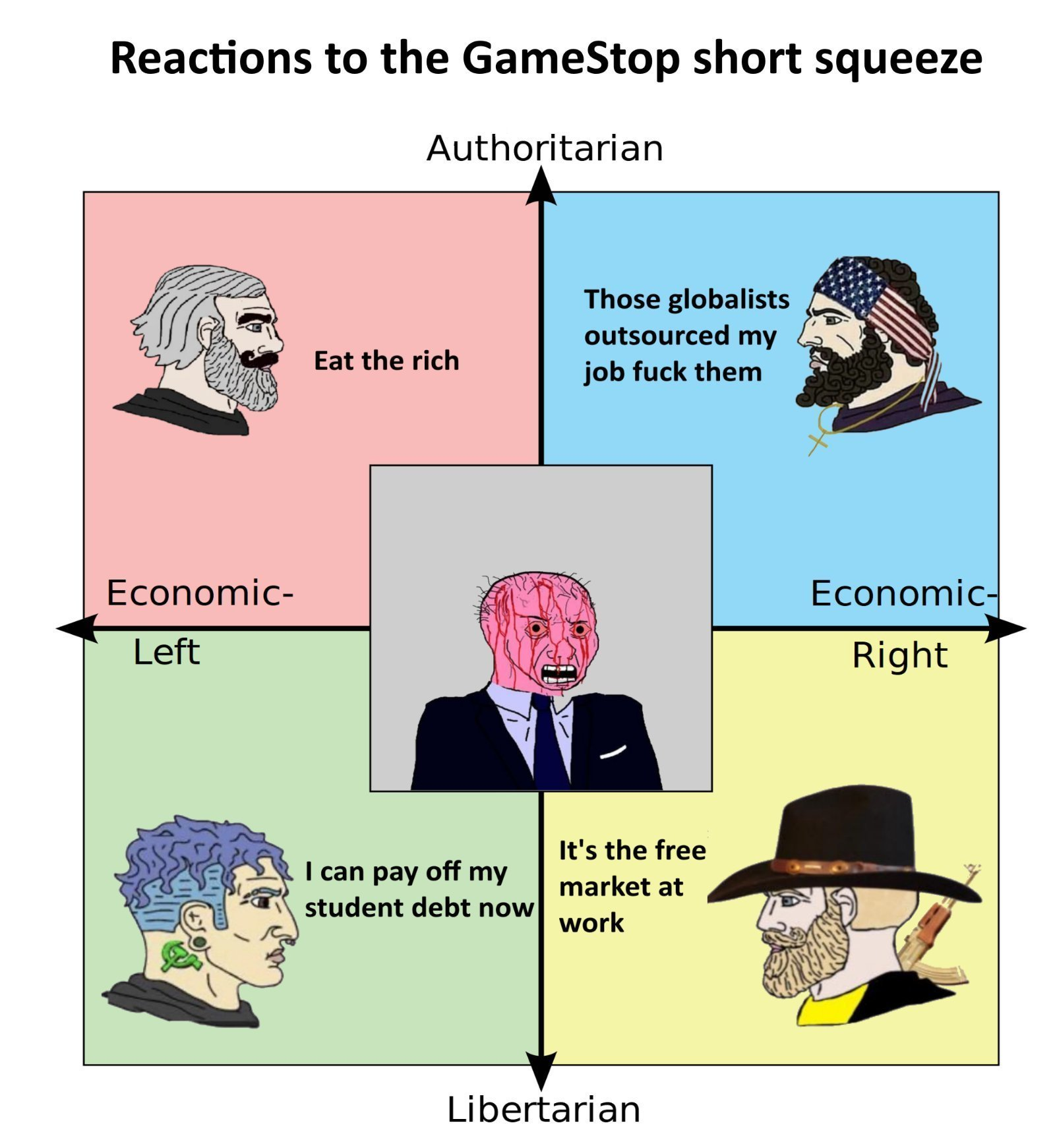 The usual suspects came out to defend the shorts, including a couple of angry billionaires complaining that working-class guys are manipulating the stock market using their coronavirus stimulus checks. But more alarmingly, we saw multiple brokerage firms halt trading on specific stocks mentioned by the Reddit crew, and even one unconfirmed case where brokers sold clients’ GameStop shares against their will. There is even word going around that the White House intervened, calling brokers to tell them to stop the buying. 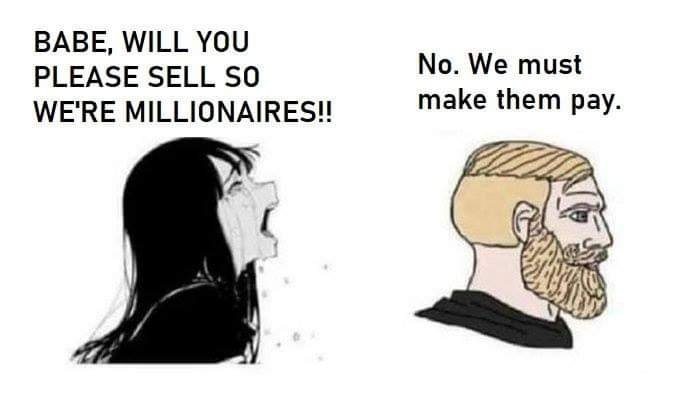 The great irony of all this is that just a few years ago we were treated to regular articles in tech magazines and business newspapers lauding the advent of millisecond trading. Big-brained hedge fund managers lectured us about how they were providing a great service to society by creating automated trading bots that could buy and sell stocks hundreds of thousands of times per second. The greatest minds in computer engineering developed new and powerful optical networks to link these operations to Wall Street trading desks, achieving internet speeds exceeding a South Korean Netflix. But now we’re supposed to believe that in 2021, brokerages can’t handle a couple hundred thousand people buying shares of GameStop? Nonsense. 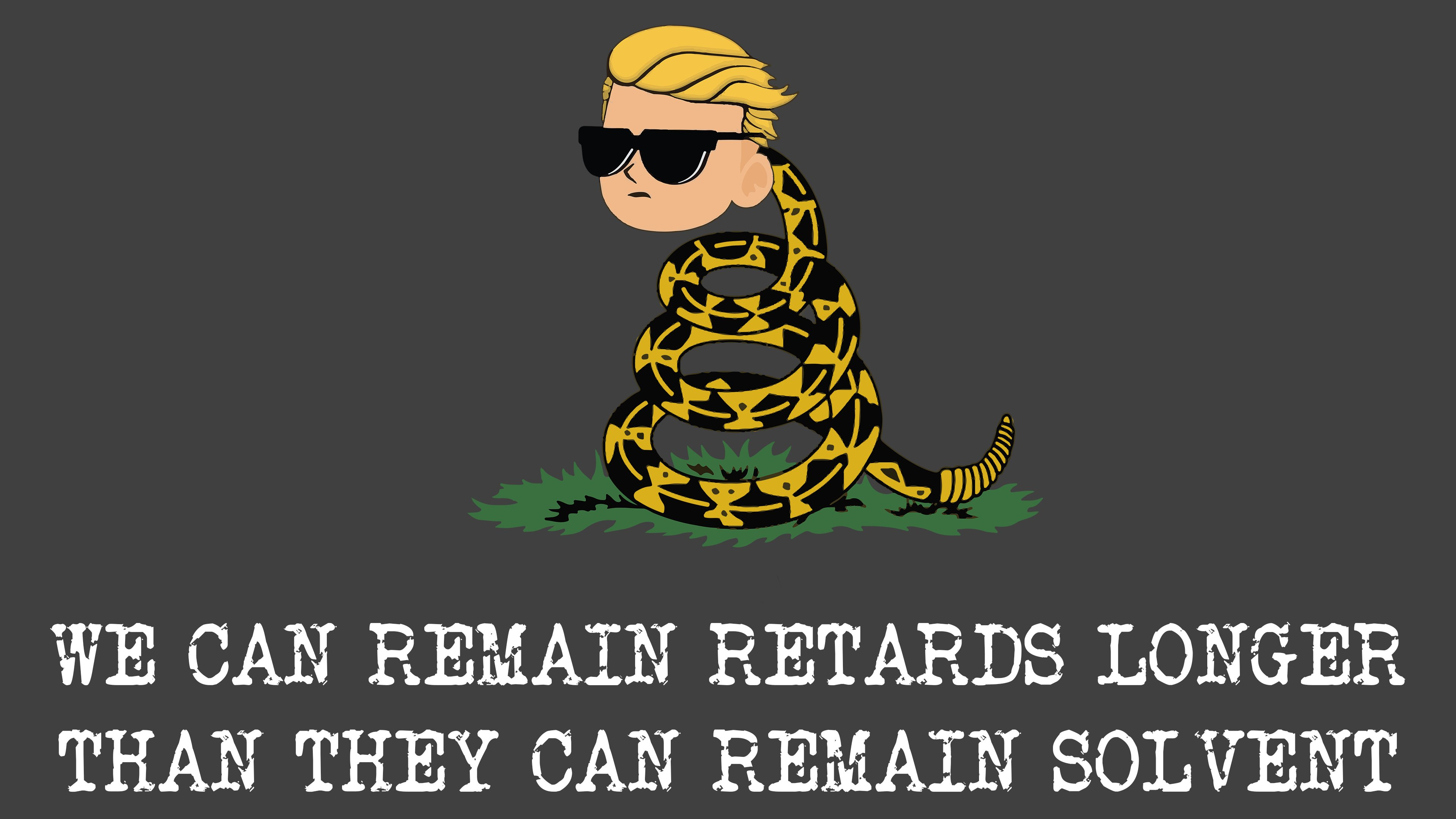 If this had been another hedge fund buying up GameStop to force Melvin Capital out, nobody would bat an eyelash. In fact, instigating short squeezes is an entirely legitimate hedgie strategy. What makes this frightening for the elites is that this was organized online and done in a fairly decentralized way. Once sympathetic populists got wind of what /r/WallStreetBets was up to, they instantly threw their hat in the ring (and many contributed by buying some shares). We saw the Winklevoss twins, Elon Musk, and nearly all of Bitcoin Twitter come out swinging in defense of this exciting sneak attack on Wall Street. Hilariously, a guest on Bloomberg said the incident was “as bad as the capitol riots.” Ben Shapiro appeared to straddle the fence on it, trying to keep his populist followers while also chiding them for having some lighthearted fun at the expense of his dual citizen cousins.

Frankly, we needed this. Even if it’s a one-off thing, it was a community experience that brought a lot of people together, produced a lot of hilarious memes, and created a memorable moment in an otherwise wretched sea of Oliver Twist slop. It also encouraged a lot of smart white men to research finance and economics, which is a plus.

Maybe this is the beginning of the end for the financial elites. A “stop” to their “game,” if you will. 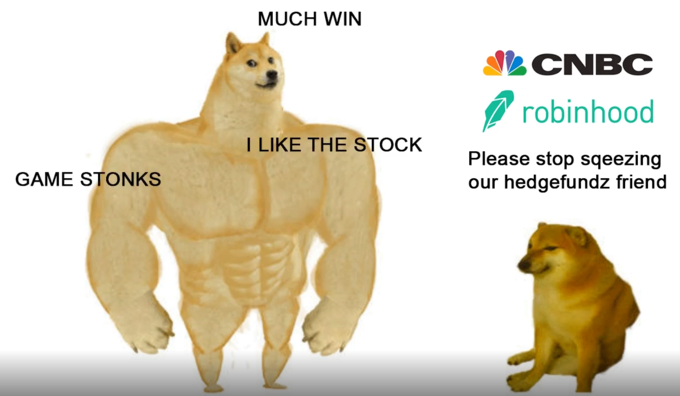 « Why Should the Fat Rule the Fit?