What’s at Stake in the Caucasus? 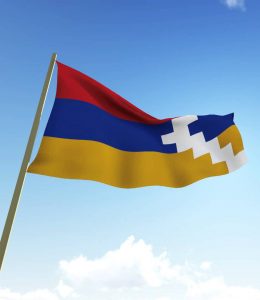 Well, it has finally happened. After years of saber-rattling, Armenia and Azerbaijan have gone to war over Nagorno-Karabakh, a self-governing area formally within Azerbaijan, but with an Armenian majority population. The great powers of the world as well as the regional powers are, of course, getting involved. Both Turkey and Iran border the region, as well as Russia, while you can be sure that America is somehow involved in this unpleasantness. There’s an opportunity to understand the nature of conflicts here.

I look at an ethnic map of the Caucasus side by side with topographical and political maps. I overlay them and I see something that strategy game enthusiasts call border gore. This is an unfortunate relic of Soviet/Romanov/Ottoman/Byzantine/Sassanid/Roman/Parthian/Seleucid/Argaead/Achaemenid rule, under which empires would mix and match ethnic groups in order to keep them squabbling among each other and facilitate control. The Caucasus looks like the Balkans before the ethnic cleansing and indeed, many places in the Balkans still have the same hodgepodge of religious and ethnic exclaves, enclaves, pockets, and cul-de-sacs as the Caucasus. If there ever was an area in need of ethnic cleansing, it’s the Caucasus.

Ethnic cleansing is an ugly word. It is an ugly word because it describes ugly acts. It can be done with minimal bloodshed, but even at its least violent, it entails uprooting at gunpoint entire families from where they’ve lived for many generations, confiscating their land with or without compensation (what’s the fair market value of grandpa’s grave?) and then escorting them to a strange land they may have never seen before, where they may be (rightfully) seen as outsiders, where it will take them generations to regain their standing and wealth. And what do you do with the old woman who categorically refuses to leave her home, even in the face of men with guns? Yes, it can be done peacefully, but an old woman shot and thrown face down in a ditch for refusing to move is within the realm of possibilities whenever we discuss ethnic cleansing. And yet it is necessary if we are to have homogenous, stable homelands.

Nagorno-Karabakh is a majority Armenian region under the nominal political control of Azerbaijan. One of these two factors must be changed in order to ensure its stability. The first option is for Azerbaijan to cede the region to Armenia. The second option is for the Azeris to ethnically cleanse the Armenians from Nagorno-Karabakh. Pride doesn’t allow the first option, whereas I doubt the regime in Baku has the stomach for ethnic cleansing. I doubt anyone in power today has the stomach for explicit ethnic cleansing. The last successful ethnic cleansing operation was Operation Storm in 1994, when the Croatian army uprooted between 150,000 and 200,000 Serbs from Krajina, a region of Croatia with a significant Serb population. The man who ordered it, the President of Croatia, Franjo Tudjman, had been in poor health since sometime in the late 70s. While I have very little evidence for this claim, I remain of the opinion that Operation Storm was the decision of a dying man to eat the sin of ethnic cleansing for the good of his nation.

Now on to the religious dimension. At its surface, it’s Christian Armenians vs. Muslim Azerbaijanis. Pretty clear, right? Well, I’m sorry to report that the conflict is more complicated than that. Supporting Azerbaijan is Muslim Turkey and ahem. . . Christian America. Supporting Armenia are Christian Russia and Muslim Iran. Wait, what? It’s even more complicated when you add on the various sectarian differences. Eastern (non-Chalcedonian) Armenia, supported by Orthodox Russia and Shia Iran vs. Shia Azerbaijan, supported by Sunni Turkey and Protestant America. What gives? This doesn’t appear to be the open and shut case the counterjihad people want me to believe it is. Who’re the Bad Guys™ and who are the Good Guys™ here? And why is America, which is the sword of counterjihad, supporting the Muslim side of the war? It’s almost as if religion matters on the ground, but not in the greater scheme of things. Yes, Armenians can gin up fighting spirit and international support among Christian (especially Orthodox) nations by framing this conflict as a crusade, and they wouldn’t be wrong, but at the higher levels, they’re breaking bread with Muslims (Iran) and countries which tolerate Muslims (Russia). Maybe the religious factor is superseded by something more permanent, something deeper.

Moving on to the geopolitical filter, things make more sense. It’s as straight an example of a Russo-American proxy conflict as you can find. American-aligned Azerbaijan, supported by American-aligned Turkey attacks Russian-aligned Armenia, which buys and sells weapons from Russo-Chinese aligned Iran, thereby causing a conflict in Russia’s Near Abroad (a Russian strategic conceptual area covering countries mostly from the former Soviet Union). The alliances are pretty clear, and the friend-enemy distinction is for once not in dispute, at least concerning the players on the ground.

These alliances also map the linguistic and racial makeup of the parties. We have Indo-Aryan Armenia, supported by Indo-Aryan Iran and Russia, while Turkic Azerbaijan gets the support of Turkic-speaking Turkey and Semite-controlled America. But who are our guys?

I won’t get into the whole thing of debating whether Armenians are white or not. In the words of Jared Taylor, they look huwite to me. Now, behaviorally speaking, there’s a bit of the Semite in them, though that may be just an effect of having been a diaspora population for so long. As Orwell put it, trust a snake before a Jew, trust a Jew before a Greek, but never trust an Armenian. In any case, I see them as white-adjacent. If, say, a son of mine wanted to marry an Armenian woman, I wouldn’t oppose it, unless we’re talking about a member of the Kardashian family. As for the Azeris, they are nonwhite both cladistically and behaviorally. But what does this mean for us?

Unfortunately, I bear no answers. Even though we are a global movement, we must focus our efforts locally, because that’s the bulk of where the work has to be done. I know the position I’ll take, personally, I know the position my friends and allies in Macedonia ought to (and likely will) take. But I can’t answer these questions for you. Rather, I wrote this article to have you think about your position with regard to this conflict. Maybe we should support the Armenians. Maybe we should not get involved. If you’re Russian, Armenian interests are for the time being allied with Russian interests, insofar as the interests of the Russian state are aligned with the interests of ethnic Russians. The same goes if you are an American. Yes, the American state is served by an Azerbaijani victory, but are you? And what about us in Europe, what about those of us who are Orthodox Christians?

While you may reach a different conclusion, I can only repeat that old Polish proverb: Not my circus. Not my monkeys.