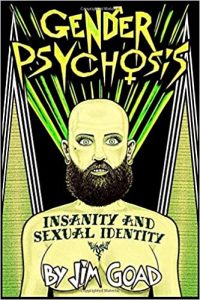 One of the strengths of this new collection of short pieces about today’s sexual confusions is that the author has no qualifications for writing them. Qualifications for writing about sex go mainly to the sources of our confusion. Thanks to an overabundance of experts, such as Judith Butler or the late John Money, the current generation knows less about sex than did its great-grandparents. I recently came across an article by a retired call girl who had decided in her early thirties that it was time to settle down and start a family. She was astonished to discover that potential suitors stopped contacting her upon learning about her previous vocation. Apparently, nobody had bothered to warn the poor girl of this possible side-effect of her career choice. She sounded almost. . . innocent.

Goad begins his collection with reflections on a few of the more outlandish contemporary expressions of gender madness, characters who reminded me of an old Woody Allen joke about a man who underwent five sex-change operations because “they couldn’t come up with anything he liked.” Some of this material, through no fault of the author, made rather unpleasant reading. Apparently, male-to-female trannies with sufficient cash up front can now have artificial vaginas surgically drilled into their bodies. Debate is currently raging between these unfortunate souls and TERFs (that’s “Trans-Exclusionary Radical Feminists”) about whether the resulting orifices smell as bad as those provided by nature. (Don’t take my word for it; see for yourself: pp. 54-55.)

Such confusion is now being enshrined in public policy. Here is an example plucked from the book almost at random:

In 2014, Mayor Annise Parker of Houston — married to another woman and proud co-mother of three adopted black children — introduced to the City Council a bill called the Houston Equal Rights Ordinance (HERO). This proposed ordinance allowed Houstonians to file discrimination complaints against anyone objecting to their use of public restrooms corresponding to their preferred gender identity. Over fifty thousand citizens presumed to think they should be consulted about a bill that would allow men to share restrooms with their daughters, and so they petitioned to have it placed on the ballot. A City Attorney named David Feldman disqualified over two-thirds of the signatures on some grounds of the sort which City Attorneys named Feldman are good at finding. Petitioners then filed a lawsuit to dispute the disqualifications. At this point, Mayor Parker filed a subpoena request “as broad as the Gulf of Mexico” requesting “a staggering amount of information from five local pastors, none of whom were mentioned in the lawsuit.” It demanded they hand over

all speeches, presentations, or sermons related to HERO, the Petition, Mayor Annalise Parker, homosexuals, or gender identity prepared by, delivered by, revised by, or approved by you or in your possession.

In her quest to ensure that a microscopic minority of individuals don’t feel inconvenienced using restrooms their biological equipment would suggest they should use, Annise Parker seems to care not one witless whit that she’s making large swaths of her constituency severely uncomfortable. It’s almost as if Joseph Stalin and Sappho decided to put aside their differences and have a baby.

Another symptom of the new madness is birth certificates without any designation of the child’s biological sex. The first one was issued in Canada in November 2016 to the offspring of a certain Kori Doty, a self-described “non-binary genderqueer trans person.” She reports that she has “struggled with mental illness,” though you may already have inferred that. Several babies — their names include “Zyler” and “Zoomer Coyote” — are now in a similar situation.

One year after Kori Doty’s bundle of joy was delivered, the Province of Ontario decided that babies should not have to rely on their parents for sexual ambiguity or transmogrification. They “passed a law that would effectively make criminals of parents who disapproved of their child’s chosen ‘gender identity,’ labeling them ‘child abusers’ and risking total loss of custody.”

The fact that intercourse causes so many infections and tears and warts attests to the unnaturalness of intercourse, that it’s not meant to be. . . . PIV is a man mounting on a woman to thrust a large member of himself into her most intimate parts, often forcing her to be entirely naked, shaking her like he would stuff a corpse, then using her insides as a receptacle for his penile dejection [sic]. . . . PIV is always rape, plain and simple.

Such feminism is bound to run aground on the reef of natural selection, however:

White women of the West who are “reclaiming” their bodies — i.e., not having kids — will be slaughtered demographically by the infusion of old-world patriarchal cultures that place a heavy emphasis on breeding. Scandinavia is a sterling example of modern feminism taken to its logical extension: The men are cuckolded into shamed silence, which allows Muslim men to come in and rape the women. In the end, feminism’s greatest achievement will be the restoration of the patriarchy.

Its practitioners openly threaten to “rape the wallets” of their “pathetic scum” clients, leading them to “financial doom.” Li’l Miss Goddess spends their hard-earned dough and laughs. “I don’t care if you live in a cardboard box,” writes one financial-slavery dom. “All lavish living for me and your ass will work hard so I don’t have to!”

As the author writes, it is the “perfect meeting ground for man-hating women and the self-hating men who love them.” While the women are not required to do anything, many are happy to dish out scorn and derision upon the men who send them money. Some maintain “slave galleries” consisting of pictures of their clients in various humiliating situations.

With regular sex-industry cash exchanges, as with most things on our unfair planet, one typically winds up with less than they pay for. Traditionally, dominatrices at least give some kind of performance. But this is domination distilled down to its abusive, exploitative essence.

The reader who holds his nose and dives into Gender Psychosis will be rewarded with tales of Downs syndrome drag shows, shrill intersectional catfights, rape as neglecting to call the next day, “chest feeding” by female-to-male trannies who no longer have boobs, UN studies which show that 90 percent of people of both sexes have “a deeply ingrained bias against women,” and much, much more.

Toward the end of the collection, Mr. Goad devotes some attention to the forgotten men of the sexual revolution: ordinary heterosexuals looking for love as their fathers and grandfathers did, yet stuck in the era of cam girls and anti-PIV feminism. We seem to read with some regularity now about one of these guys snapping: George Sodini, Elliot Roger, Alek Minassian. Yet Mr. Goad understands something few else do: that such men are outlier cases of a much larger and socially dangerous trend:

Focusing on the ultraviolent freaks only serves to obscure the deeply sad fact that many young men out there feel that there is no place for them in this world — and certainly no empathy. If they dare to make a sound about the fact that many modern women are shallow, hateful, status-seeking, promiscuous whores, they are swatted down as misogynists. They know there is zero sympathy in this culture for unsuccessful males and that if they dare to complain, they will immediately be slandered as another Elliot Roger in the making. They inhabit a world where there’s an anti-bullying advocacy group for every loser on the planet except [them]. In that case alone, society’s attitude is that those creepy, ugly, rapists-in-training deserve all the disdain they receive. And still people wonder why every few years, one of them snaps.

« Will the Real Jessica Krug Please Sit Down?

» Video of the Day: Robinson Crusoe & the Rise of the West