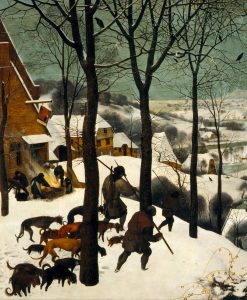 Pieter Bruegel the Elder, Hunters in the Snow, 1565 (Detail)

If you’re milling around Counter-Currents, you’re probably savvy to the notion that human beings are biological creatures, that we are shaped and molded by our environment’s ruthless Darwinian pressures into our present form. To think this way is heresy in the contemporary West. To consider the possibility that man is subject to the laws of nature offends the prideful sensibilities of our Gnostic and Luciferian elites. To think of oneself as a thread in the great tapestry of being offends the petty individualism of the modern Westerners. We reject human biodiversity, we arrest speakers at human biodiversity forums, and such forums are besieged by vile, black-clad political terrorists. And yet we need to think that way, and men persist in thinking, researching, meeting and discussing because we are drawn to that most ancient of philosophers’ dictum – Know Thyself, so that we may live in accordance with ourselves.

The first order meanings derived from the facts of human biodiversity are well known: there exist racial differences in IQ, probably racial differences in behavioral patterns, and also sexual differences in behavior. This has enormous implications for every human endeavor where the races and nations of man have to be considered in common. You can always take the reductionist and uninspired route which I like to call Rue du Molyneux after its baldest and most obnoxious traveler, but has been pithily named “IQ nationalism” by cleverer men than me. It entails, among other things, welcoming our new Han overlords because their average IQ is marginally higher (or more exactly, the average IQ of a fellaheen China is higher than the average IQ of a severely degenerated West). Or you can delve deep into what makes the Western soul different from that of other men.

The second order meanings derived from the facts of human biodiversity are not to be found in charts of IQ by race, in FBI crime statistics, or in GDP per capita rankings. Rather, they are to be found in thick, dusty books, in soaring cathedrals, in religious fervor, in thunderous symphonies and the infinite vistas of visual art. Acknowledging our debt to the Taylors, Duttons, Sailers, and Rushtons of the world, we seek out the Spenglers, Evolas, Vicos, and Duchesnes, who can teach us the how, the why and the whence of the Tolkiens, Michelangelos, Bonifaces, Tchaikovskys, and Toulouse-Lautrecs. I find that awe is the sense of being humbled and uplifted at the same time. To experience beauty is to experience the numinous. To experience the numinous is to feel human and alive, to have a momentary respite to the suffering and alienation inherent in modern life. Beauty is to the soul what bread is to the body. Whence this outpouring of incomparable beauty? Do lend me your ears, friends, for I have a theory.

White people are ice people. Our ancestors lived in some of the coldest regions of the planet. They lived through the coldest and darkest of winters by the skin of their teeth. Cold winter theory explains our high IQ and low time preference. But once you’ve built the stout hall and kindled the great fire and loaded the storehouse with food to last until the distant spring, what do you do? And here, I believe, the uniquely European love of beauty arose – beauty was something to think about in those long winter nights, where to leave the house meant death. Beauty of tale, song, and vision. Beauty of togetherness. Beauty of warmth.

Man in deep winter is man under siege. Man the hunter, man the walker, and Indo-Aryan man the horselord in particular is a creature which craves the thrill of roaming. The all-American cult of the open road, the steppe nomad’s reverence of the open sky, the Mediterranean reverence for boat and sea, the pilgrims’ journey to Canterbury, all speak of our love of travel, all reflect the great urge to move about unmolested and unconstrained. Western man’s soul is entwined with the Spenglerian prime symbol of a force vector hurling its energies into infinite space. Western man the explorer, Western man the conqueror loves movement. Winter is a hard limit on that urge. The boxed energies of Western man then turn inwards. I believe that the immeasurable depth of the Western soul is derived from this immense energy burrowing ever deeper into the self, in the dark, dead of winter. The claustrophobia of winter creates the dreams which fuel art, faith and joy. Cold is a prison cell. The body is entrapped by low temperatures, it tends towards motionlessness in winter. To move is to expend valuable energy, to leave the house is to expose oneself to the deep darkness of winter. And yet the mind can be neither slowed down nor stopped.

In this deep winter, we find ourselves dependent upon our family and friends. I imagine that the long halls of the old kings were full of huddled people, relying on one another to live through the dead of winter. To be white, to be a creature of the North, meant being with others. Alone, man is easy pickings for Jack Frost and his many ravenous nasties. When philosophers talk of a social contract (or more correctly, a social compact), they do not speak of a document which has been signed and notarized, as the autistic libertarian would have you believe. I’ve observed that relations among friends, and lesser financial obligations function much like the electron cloud theory of the atom. Because of Heisenberg’s uncertainty principle, one can either measure the momentum or position of the electron, but not both with sufficient precision. For this reason, the electron cloud represents various probabilities that a given electron is in a given position vis-à-vis the atomic core. I believe that petty obligations between friends, including financial ones work in the same way – minor expenses are not exactly tabulated, but a certain amount of giving is expected from those who mean to take in the future or past, adjusted for the ability to give. This is a good way of accounting for the unaccountable, which is to say living in a society of informal giving and taking with a tolerable dose of uncertainty. For this reason, we have the typical European altruism. In its degenerated form, it is the bane of our people, but this is true of every virtue – it becomes a vice in its excess. But I believe that the electron cloud model of mutual obligations among friends is applicable to the mutual obligations between members of human society, especially European society, which relies on communality and altruism far more than other societies.

In order to avoid this very inhumane accounting for giving and taking, in order to not live as slaves to ledgers, we have cultures of giving. And giving, I wager, is one of those things that keeps us sane. We are paradoxically the people most evolved to be communal, due to the harsh winters, and yet the most individualistic, due to the inward direction of our expansionist energies in the days of dark winter. In the dead of winter, Western man falls prey to solipsism and navel-gazing, alienating himself from his friends and family. This inward thinker has somehow found that it is impossible to prove to oneself that other conscious beings exist. I do not know if my friends exist – they might be fever dreams cooked up by a demon intending to deceive me, as per Descartes. How do we square this circle?

It is my belief that love, in all four of its manifestations, is the answer. Love is the soul’s response to the increased perceived probability of the existence of another soul. And love of one’s neighbor must be reinforced – I do not believe in love without physical action. We who intend to live as men, and not animals, must give if we are to take in the future. We give, even without reward, because we hope, in the future, to receive. We give because we want to live as men among men. And the darkest of days, when we are most at risk of forgetting our place among our people are the days of our festivals of giving. Christmas is a celebration of our nature as creatures both individualistic and communal, of men as threads in a great tapestry, but each king under his roof and each dreamer in his soul. We give to feel human.

A grey chill descends upon my city. It looks like another snowless December, as a dense fog envelops the senses and penetrates deep into my garments. I leave my office for my lunch break to meet my wife. We take a stroll by the river. We see some ducks and a black waterfowl which is larger than a duck, but smaller than a swan. We kiss. “Your mustache is wet.” The fog gets everywhere. It carries the cold with it. The sun looks quite eerie through the fog, a whitish ball of light, like the disembodied eye of some ungodly deepwater fish. I hug my dear. The warmth of her body radiates through many layers of clothing. The warmth of her soul reassures me that I am not alone in the universe.

Orthodox Christmas doesn’t come until January. But in deep December, at the Solstice or thenabouts, we celebrate the feast of St. Nicholas, bishop of Myra, Miracle-worker. I am personally associated with St. Nicholas and his feast for more than one reason. St. Nicholas was born to wealth, but he became a monk and gave away all his wealth to the poor. He gave his wealth to three poor girls so that they may have dowries and find husbands and find joy. He snuck gold coins into their socks as they were drying out. But when the youngest was getting married, it was the dead of winter and the house was boarded shut, so St. Nicholas shimmied down the chimney to drop the gold coins in the girl’s socks, which were hanging from the fireplace.

In the West, St. Nicholas is Santa Claus, and Santa Claus is a composite figure – not only is he the kind and giving Bishop of Myra, but he is also an avatar of the All-Father, of Odin, who was himself a wanderer and miracle-worker. Santa Claus is many things, but he embodies the principle of giving, of belonging and good cheer even as the days grow ever shorter, even in the longest nights around the Solstice.

The cold, the snow, the darkness, the endless sky have sculpted European man. We are children of winter in a way no other people are. We love winter like no other people do. We fight with snowballs, we ski, we sleigh and we build snowmen. American children look to snow to give them respite from the tyranny of government schools, if even for a day. There is a beauty to a winter night that is to be found in no other landscape image. The European soul is the product of the winter night. It is warm, tender, yet rough and adventurous, both individualistic and communal, at peace with contradiction and uncertainty, basking in that greatest joy of winter — the communal dream of spring.