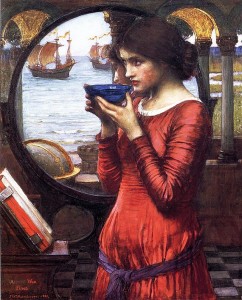 It is traditional around New Year’s Day to be reflective of the year past and to anticipate the events of the coming year. First of all, I would like to commend Spencer Quinn for his excellent article “No Goal More Noble: Thoughts for the New Year” that appeared yesterday on Counter-Currents. Mr. Quinn’s eschewal of the black pill at the end of this most blackpilling of years represents an act of moral will that is truly inspiring. Knowing the proclivity of the Alt Right to counter-signal Christianity, I am almost loath to point out that the only unforgivable sin in Christianity is that of despair. But fear not, one can avoid despair and still retain one’s atheist bona fides.

My cautious optimism for the coming year has nothing to do with my assessment of recent events. As those of you who have followed my writing on this website know, I consider the Alt Right or White Nationalism (or whatever moniker eventually receives common acceptance) to be solely an intellectual movement that is completely lacking in any type of effective political leadership. It is truly mind-boggling to me that in the year-end interviews with the various movers and shakers of the Alt Right there are still those who contend that there are positive things that have come out of the Charlottesville march. To me that is like a man who has had both arms and legs amputated who says, “But on the bright side, I’ve lost a lot of weight.” There is guarded optimism, and there is whistling past the graveyard. I prefer the former.

My optimism is rooted in my historical reading and having lived through three times as much real history as most of those who embrace the Alt Right. Recently, I re-read the book Historians’ Fallacies by the eminent American historian David Hackett Fischer, and I was reminded that one of the chief fallacies identified by Fischer is to believe that historical trends always continue unabated. I am always amused (and a little concerned) whenever I listen to Alt-Right podcasts and online streams at the lack of knowledge about the Cold War among the younger generations. As someone who lived through that 45-year struggle, I can assure you that—and as the declassified documents from Washington and Moscow archives confirm—we faced a real existential crisis during the Cold War, one that was every bit as threatening to the continuation of the white race as the current attempted demographic replacement of whites by the Democrat/Republican Uniparty. There was not one analyst or historian of note who foresaw the collapse of the Soviet Union. Communism seemed to be inevitable, a trend that would continue unabated until it controlled the entire world. After all, the Soviet Union had 30,000 nuclear warheads and there was no way that the United States could attack the Soviet Union directly without being destroyed in a nuclear war. And then the Soviet Union collapsed in a manner that no one anticipated.

The dictatorship of the proletariat didn’t make it to her diamond jubilee, the 1000-year Reich only lasted 12 years, and the Eternal Roman Empire lasted far less than an eternity. Trends continue until they don’t, and when trends stop they stop in unexpected ways.

While it is easy to become blackpilled by the reporting of current events, we must remember that we live in a postmodern age, one that has abandoned truth as a normative goal. And when you abandon something you implicitly endorse the opposite, and the opposite of truth-telling is lying. In a postmodern age, all of our institutions are engaged in lying: government, media, churches, schools and universities, the list goes on and on. All contemporary institutions lie; they lie constantly and they lie about everything. We do not know what is going on because our institutions lie to us.

Because we do not know what is really going on and because of my reading of history, it is my belief that we are actually much closer to a denouement of our political situation and that it will come about in ways that are totally unexpected. And while I am optimistic in the historical sense and believe that the white race will be victorious and will again dominate the world, I also believe that our victory will not come about politically but will be resolved violently. The American Empire is coming apart at the seams. Even if President Trump eventually builds a border wall, I believe that his most consequential act may prove to be bringing troops home from the Middle East and Afghanistan. This act is the first real step in the unraveling of the lie that has been American foreign policy since the end of the Cold War. Israel and the Deep State can tolerate the white race longer than they can tolerate peace, or as historian Harry Elmer Barnes so eloquently and ironically put it, Israel and the Deep State desire “perpetual war for perpetual peace.”

I believe that America will soon be involved in a racial civil war, one that will be part of a worldwide series of local but related wars that will afflict North and South America, Europe, and Africa. There is very little chance of the tensions in America being resolved politically. The Left becomes more unhinged and violent by the day. America is a revolutionary country, and our biggest internal conflict was resolved on the battlefield. Furthermore, Negroes are unintelligent and lack political leadership and mestizos are violent and possessed of a chthonic Aztec blood lust. Finally, civil war is the only option left for the Deep State and the establishment Uniparty when the ZOG playbook becomes a spent force. The European Union is falling apart, nationalism is on the rise, and overpopulation in Africa can easily be resolved by ways other than immigration. All signs point toward a war that will be both extremely violent and very definitive in its outcome. I also predict that chains of command in the various armed forces will become severed and that alliances heretofore thought impossible will be realized.

So while I am optimistic about the white race’s eventual victory, my optimism is tempered with what psychiatrist Nassir Ghaemi has termed “depressive realism.” We have to face facts and they are not always what we want to hear. For a diagnosis to be effective it must be brutally honest and direct. We are in far worse shape than we imagine, but we are closer to victory than we imagine. Trends continue until they don’t. Our victory will be the result of unforeseen events because the calculus of history contains too many variables. Be of good cheer, never despair, never apologize for your beliefs, and keep in mind Hamlet’s admonition to Horatio: “There are more things in heaven and hell than are dreamt of in your philosophy.”

Happy New Year to All!

« The Counter-Currents 2018 Fundraiser
We Made It!

» The Pathological Altruism of the Tibbetts Family