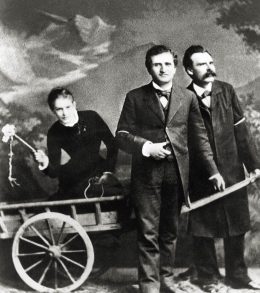 Nietzsche, on the right, with friends Lou-Andreas Salomé & Paul Rée in 1882.

are very clear and exciting books that examine the development of Nietzsche’s ideas throughout his career. Because of the importance of art and religion to Nietzsche, they serve as excellent overviews of his philosophy. Young has also published an important biography, Friedrich Nietzsche: A Philosophical Biography, which combines overviews of Nietzsche’s life and works in a single volume. Although it is a long book, it is well worth the investment of time. (I recommend it despite the fact that Young has been accused of plagiarizing another biography of Nietzsche. Young’s “crime” strikes me as simply an editorial mistake. It is certainly not plagiarism of the kind practiced by Alan Dershowitz or Martin Luther King.)

» Bonfire of the Dunces