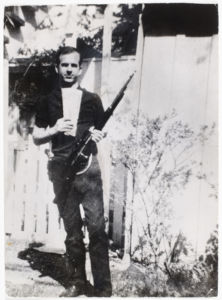 Lee Harvey Oswald holding the rifle he would use to assassinate JFK and the pistol he would use to murder Dallas policeman J. D. Tippit. He is holding two Communist publications called The Militant and The Worker.[1]

American culture is still spinning wildly from the assassination of US President John Fitzgerald Kennedy in Dallas on November 22, 1963 by a self-radicalized antifa gunman acting alone. American liberals and Leftist sympathizers in particular have had a tough time dealing with the murder. Kennedy’s widow later remarked that “[JFK] didn’t even have the satisfaction of being killed for civil rights. It had to be some silly little Communist.”