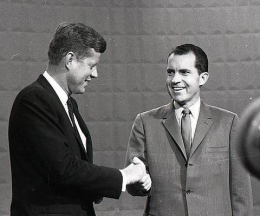 Richard Nixon made a fateful decision on the afternoon of November 9, 1960. He telegrammed John F. Kennedy to formally concede the presidential race. This concession ensured that there was no nasty legal battle or potential constitutional crisis over the election.

Many observers praise Nixon’s decision. They claim his concession saved our system from a brutal contested election and ensured our democratic norms remained unharmed. To borrow a well-worn phrase from Never Trumpers and asinine centrists, Nixon put country over party.

But did he really? Was Nixon right to concede an election that Kennedy won through fraud and corruption? Was our nation better off without a contested election?

These questions are especially important in light of what awaits in the 2020 election. Most commentators believe a contested election lies ahead of us, with the prevalence of mail-in ballots, widespread accusations of fraud, and expected razor-thin margins in battleground states. Both Republicans and Democrats seem eager to challenge the results, whatever they may be. As most of our readers know, it’s more likely that Trump will be the victim of election shenanigans than Biden. The Deep State, the U.S. Postal Service, the Democratic machinery, the media, Antifa, Black Lives Matter, and well-funded activist groups stand against him. If they steal the election from him, Trump has a choice: he can follow Nixon’s example, or he can fight.

Nixon lost the popular vote by a little over 100,000 votes, the closest electoral margin of the 20th century. His defeat was ultimately due to two states where electoral fraud was rife: Illinois and Texas. Nixon lost Illinois by nearly 9,000 votes and Texas by some 45,000 votes. Credible allegations of voter fraud were lobbied in both states. Chicago Mayor Richard Daley, the overseer of a powerful political machine and a pillar of the Democratic Party, was accused of tipping the scales in favor of Kennedy. Texas, under the influence of Kennedy’s running mate Lyndon B. Johnson, also engaged in ballot hijinks that gave the Democrats victory.

But even though these questions about the election were unresolved the day after the election, Nixon conceded the race. Many Republicans urged him to challenge and his party continued to demand recounts days and weeks after the election. Nixon was the sitting Vice President and could’ve possibly called upon state power to help him in his fight. But the future President gave all that up to the lukewarm approval of the press and liberals. He’s still seen as a sore loser 60 years later, even though he didn’t fight the election results.

There are compelling arguments that a contested election would have been a fruitless fight. While challenging the results in Illinois may have resulted in the state moving into Nixon’s column, there was little chance of that happening in Texas. The margin was significantly larger and Texas had no formal process for disputing an electoral result. It would’ve likely been left to the state’s Democratic officials, all in LBJ’s pocket, to handle the matter. It doesn’t take a genius to figure out what result they would have found. Nixon needed to win both states to take the White House.

Nixon and Kennedy were nearly indistinguishable on the campaign trail. Both vowed to be militant Cold Warriors who would escalate the fight against communism. Both supported government intervention in the economy and more benefits for the American people. Both were considered moderates on civil rights. The major differences were in style and faith. Kennedy was a Catholic, while Nixon was a Quaker. Kennedy was charismatic and inspiring, while Nixon was wooden and too blatantly ambitious.

Despite the similarities in the campaign, Nixon was a superior president when he came into office eight years later. If he had won earlier, he may have saved this country from a lot of grief. Nixon, knowing the plans for the Bay of Pigs as Vice President, would have likely committed more American military resources towards it and made it a successful operation against the Castro regime. No Castro, no Cuban missile crisis. Kennedy felt a stronger need to prove he was tough on foreign policy and got us more enmeshed into Vietnam as a result. His advisers, famously dubbed the “best and the brightest” by David Halberstam, persuaded Kennedy’s successor to get us into a full-blown war in Southeast Asia. Nixon already had impeccable anti-communist bonafides and would have been more inclined to a realist approach to Vietnam. Imagine American history with only a limited engagement in Nam.

Domestically, Nixon would’ve probably followed Eisenhower’s reluctance to fully champion civil rights and would’ve steered clear of the comprehensive legislation backed by JFK and LBJ. Nixon also didn’t write a book called A Nation of Immigrants and wouldn’t have revolutionized American immigration policy. LBJ, in an attempt to honor Kennedy’s legacy, did so through the Immigration Act of 1965.

Under Nixon, we may have not seen the civil rights revolution enshrined by the federal government, our nation swamped by mass immigration, and we would have likely not wasted blood and treasure in Vietnam. In all likelihood, America would be a better country today if Nixon had won.

But he didn’t, and it is useless to bemoan the past we can’t change. We can only take lessons from history and apply them to the future.

A major issue for a Nixon challenge is that the election was not held amid a serious cultural struggle. America was largely culturally homogenous. Nixon and Kennedy were virtually similar even though they would have governed differently. 1960 America was at the high point of its post-war civic nationalism. Both the people and the elites (with some Bohemian exceptions) thought they lived in the greatest country in the world and they were united in opposition to communism. The country was nearly 90 percent white and at least 92 percent Christian. Roughly half of America attended weekly church service. Few mainstream voices condemned the founders as evil white supremacists, much less was this idea taught in public schools. The 1960 election also represented the last gasp of popular anti-Catholic nativism with Kennedy’s victory, signaling the full induction of Catholics into the body politic.

America still had tensions, such as the battle over segregation. But it was mostly united and ready to accept whoever won the presidency. Many Kennedy voters would become Nixon voters later on in the 60s, indicating the lack of permanent polarization.

Our election is very different. The post-war civic nationalism that united America is dead and buried. “America was never great” is a popular slogan on the Left and there is no shared foreign enemy. We are more diverse, balkanized, and atomized than we were in 1960. Fewer go to church and fewer identify as Christian. Children are taught more about America’s sins than America’s greatness.

The campaign also pits two radically different candidates. Joe Biden wants open borders, gun control, reduced policing, more censorship, more foreign wars, and the promotion of a non-white America. Trump, either implicitly or explicitly, doesn’t want those things. Their supporters are polarized from one another and believe the other side will take their rights away if they gain power. While America lacks the essential ingredients for civil war, both sides see each other as enemies rather than fellow countrymen.

Nixon’s supporters could know that he could hand off the election and know they wouldn’t be put into a prison camp by Kennedy. There was an understanding that they were all Americans. That understanding is gone.

If Trump concedes a disputed election, he leaves his supporters and the historic American nation at the mercy of an empowered liberal coalition. The Left wants revenge for the past four years, and they will take it with relish. Trump will likely be indicted for some stupid offense if he loses. There is no common ground and there is nothing that unites us.

The election is guaranteed to be close. Trump must fight it out to the end. The America of 1960 no longer exists. There can be no magnanimous capitulation.