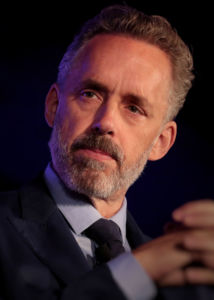 I routinely summarize what people have said to me, and ask them if I have understood properly. — Jordan Peterson, 12 Rules for Life

Don’t talk to me that way. — Patti Smith, Break It Up

Jordan Peterson is not, as we English used to say, everyone’s cup of tea. Many on the political Right don’t know what to make of him, while the Left see two things they don’t understand and therefore don’t like: intelligence and a high-profile opinion divergent from theirs. The Left, as we are all too aware, are not the sharpest chisels in the toolbox, and are frightened of anything written that is not Ibram X. Kendi, Robin de Angelo, or a woke graphic novel.

I bought Peterson’s book 12 Rules for Life after the hubbub had died down, and found it a good read without particularly changing my life (although it is aimed at readers younger than me). Peterson instructs us, for example, to clean our rooms. Sure. The rooms in which I have lived always look as though they have just been ransacked, and that is the way I like it.

But the book is not Beyond Good and Evil. It is an apparently harmless self-help book and should not have ruffled the feathers of the cultural commissars. Peterson got very big very quickly, however, and was not sticking to the approved script. Accordingly, hazard buzzers began to sound in the subterranean corridors of the Deep State. Peterson had two things the new ideological Reich cannot live with: a heretical message and the means to transmit it.

Peterson is a natural communicator and a seasoned academic lecturer. He is erudite and passionate, well-read and analytical, culturally aware, and with a healthy dissidence. My favorite moment from one of his interviews is where he praises not a classical philosopher or Russian author, but Alice Cooper’s brilliant 1975 album Welcome to my Nightmare. Peterson is also a professional clinical psychologist (they are the useful ones, unlike experimental psychologists), licensed and accomplished in his career. Or at least he is at the time of writing.

In the context of what is now regularly called “cancel culture,” Peterson has been cruising for a bruising since 2016, when he fell out with university authorities in Toronto for his perfect willingness to use students’ “preferred pronouns” (you can’t write that phrase without scare quotes, seriously) as long as it was not mandated by legislation. This is the ultimate heresy now. If the state tells you that two plus two equals five, you had better not be coming back with any of that “four” crap.

Today, Peterson’s career as a professional and practicing clinician is under threat, not least because he has fallen foul of Canadian premier and dandyish show pony, Justin Trudeau. This charlatan may or may not have weaponized Peterson’s professional body, The College of Psychologists of Ontario (CPO), in the same way he may or may not be the bastard son of either Fidel Castro or one of The Rolling Stones. Trudeau is one of the most egregious examples both of globalist placemen blowing smoke up George Soros’ backside, and also the modern voter’s stupidity. I have always rather liked the Canadians I have met, but I do puzzle at the fact that they could keep voting for this mountebank.

Trudeau is one of those gentle psychopaths, all crying jags and funny socks, mincing onto the set of a TV show featuring a preening queen called Ru Paul. But psychopaths tend to hide their nature under skillfully arranged social camouflage. Trudeau showed his true nature last year when he went after not just the Canadian trucker convoy, but even the people who had donated ten bucks to their cause. He hounded Ezra Levant of Rebel News for writing the only book among a bunch of volumes of ecstatic praise to be critical of this fop. And now he is complicit in the hunt for Jordan Peterson.

The best piece I have read on the current Peterson imbroglio is here at CBC, the Canadian Broadcasting Corporation. It is written by a man with a name sinisterly close to my own, Mark Gollom, and I had to check to ensure I wasn’t ghostwriting under a feeble alias and had forgotten. The piece gives all the necessary background and profile, although Peterson has become practically a brand name and I’m sure you know much of it. The piece is worth reading for the details, but I am more interested in what Peterson’s persecution means for those of us who don’t know the words to the new globalist international anthem and sing something else instead.

The saying “to find out who rules you, first find out who you can’t criticize” has been variously attributed — Voltaire seems to be leading the pack — but it can scarcely be denied. Anyone reading this who has ever worked for a company, and therefore dealt with management, will understand the risk in criticizing these quasi-autistic autocrats, at least if one wishes to maintain employed. Like monkeys and the Japanese, petty people in positions of power don’t like you to show your teeth in laughter. The devil cannot endure to be mocked. Nor can your line manager. But mock the devil is precisely what Peterson has done.

The tweets which have got Peterson in the soup are all in Gollom’s piece. One criticizes an Ottawa councilor for obsessing about personal pronouns, one sees the doctor “dead-naming” some transvestite, one insults a former secretary to Trudeau, and the last says that a fat woman on the cover of a swimwear magazine is “not beautiful.” The fact that the Deep State (in the outsourced form of Peterson’s professional overseer the CPO) is coming after him is absolutely in accordance with the ongoing globalist program to silence those who must be silenced. And it may be no coincidence that Canada is hosting this witch hunt.

Commonwealth countries, along with Britain’s number one major European trading ally The Netherlands (née Holland), seem to have been chosen as lead astronauts in the current accelerated push for totalitarian control over the populace. Trudeau aside, New Zealand’s equine Prime Minister Jacinda Ardern spoke publicly about the government being “the single source of truth.” I don’t, incidentally, call her “equine” because she rides horses, but because she looks like one. I am not usually in favor of ad hominem (or in this case ad feminam) insults, but sometimes you have to tell the better angels of your nature to butt out. In Australia, although new PM Albinese has yet to reveal just how much of a socialist he really is, Governor of Victoria Dan Andrews, who looks like someone’s retarded cousin, went full retard during Covid, relishing the power to lock people down.

Meanwhile, over in Europe, Dutch farmers were less than ecstatic that they had been chosen as the first victims of legislation to reduce nitrogen use in fertilizer, which is a bit like telling a car manufacturer he can’t use rubber in the tires. As protestors said, no farms, no food. Farms will have to close. But it’s okay — the Dutch government will buy them up! So that’s fine, then. Food for all! Well, dependent on your social credit score . . .

The aggregate of all this is that Team Global is testing the water, and Canada’s attempted takedown of Jordan Peterson is a training exercise for what is possible in the social sphere. There are, of course, the “uncancellables” who are already so rich and culturally established that their careers cannot be ended by malicious use of the media, social or otherwise. J. K. Rowling is the obvious example. I have never read any of the Harry Potter books because I am not 14, but it is hard not to appreciate her influence. And so when the commissars went after her, including the talentless and ungrateful little shits to whom she gifted an acting career, they could sully her reputation only so far.

Peterson is similar (but I would imagine nowhere near as imperially rich as Rowling), although the aim here is not to subject him to the scorn of the modern equivalent of the chattering classes on Twitter, but to take away his license to practice. They can’t break him financially, but they can take away his privileges, such as being able to work at a job he clearly loves and is demonstrably good at. The CPO are also demanding that Peterson attend a “media training program” to atone for his sins and teach him the correct way to express himself. You couldn’t get more Stalinist if you grew a big moustache, or more like Ho Chi Minh if you wore a cute little jacket.

I find one of the strangest aspects of this whole assassination attempt to be a disclaimer at the start of the CBC feature on Peterson’s persecution (which actually sounds like it should be a psychological condition). In bold type, Mark Gollom’s piece carried the following:

WARNING: This story contains details some readers may find distressing.

Read the piece, and if anyone is distressed, get in touch with me through the usual channels. I am sure we can find help. What I would find distressing is Peterson’s apologizing and climbing down. He has no intention of doing so, and a seemingly unstoppable force is about to clash head-on with an apparently immovable object. Which is which remains to be seen, but Jordan Peterson should be applauded for being the proverbial canary in the coalmine. The day may be approaching when many more of us are down there in the dark.