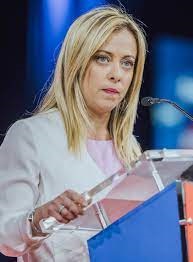 The jury is still out as to whether Giorgia Meloni, who may become Italy’s new Prime Minister after Sunday’s elections, is the new Mussolini.

Look out — here comes Hitler in a bra.

On Sunday, Italian voters are expected to propel a “far-Right” coalition led by a saucy and fetching 45-year-old woman into power.

Almost exactly one hundred years since Benito Mussolini took charge of Italy’s government, headlines for both UPI and the Guardian warn, in the exact same words, that Giorgia Meloni could “become Italy’s first far-Right leader since Mussolini.”

“Giorgia Meloni May Lead Italy, and Europe Is Worried,” reads the headline in The New York Times, and although New York isn’t even in Europe, the Times apparently claims to speak for the entire continent. The Times explains how, after yet another one of Italy’s innately unsustainable coalition governments crumbled earlier in the year, Meloni was able to rise from obscurity:

Ms. Meloni led the only major party, the Brothers of Italy, to stay outside that unity government, allowing her to vacuum up the opposition vote. Her support in polls steadily expanded from 4 percent in 2018 to 25 percent in a country where even moderate voters have grown numb to Fascist-Communist name calling, but remain enthusiastic about new, and potentially providential, leaders.

Pundits warn that Meloni will “send Italy down a dangerous authoritarian path we’ve seen elsewhere in Europe.” They caution that such a hasty “leap into the unknown could well turn out to be a very dark ride.”

Leftist Italian writer Giorgia Serughetti, whose pinched visage has likely never induced an erection, says that Meloni “speaks to a specific population: one where families are composed of ‘men being men’ and ‘women being women’, fathers and mothers, native and white.”

People seem to think that merely summoning the word “fascism” will result in such a hysterically Pavlovian reaction that people won’t even listen to what Meloni says. Here are some things she has actually said:

You see, political correctness is a shockwave, a cancel culture that tries to upset and remove every single beautiful, honorable and human thing that our civilization has developed. . . . It is a nihilistic wind of unprecedented ugliness that tries to homogenize everything in the name of One World. In short, political correctness — the Gospel that a stateless and rootless elite wants to impose — is the greatest threat to the founding value of identities.

There is no possible mediation. Yes to the natural family. No to the L.G.B.T. lobbies. No to the violence of Islam, yes to safer borders, no to mass immigration, yes to work for our people. No to major international finance.

Apparently not a natural blonde — although to verify according to commonly accepted journalistic standards, one would have to check the carpet to see if it matches the drapes — Giorgia Meloni used to be an overweight and introverted Michael Jackson fan who was raised by a single mom in a working-class Rome neighborhood. At 15, she found what she has since called her “second family” when she joined the Youth Front of the Italian Social Movement. She won her first local election at age 21. Ten years later, she became the youngest minister in Italian history when Berlusconi appointed her a youth minister under his regime.

Already buried under crushing piles of debt, Italy is the main port of call for all those sweaty and desperate huddled African masses heading to Europe from North Africa, and Italians are starting to lose their patience. Boat people from Northern Africa are infringing on the Mafia’s crime monopoly in Sicily. The deeply Catholic country’s citizens aren’t too keen on mosques suddenly appearing across the land, either.

Meloni is against illegal migration and “Islamization.” She recently called for a naval blockade against migrants. She has accused the EU of enabling “the project of ethnic replacement of Europe’s citizens desired by the great capitals and international speculators.”

She’s a woman who allegedly peddles an “anti-women agenda” by pushing the “myth of the ‘migrant rapist,’” at least according to some other woman. In other words, she “exploits sexual violence . . . for racist and xenophobic purposes” by running TV ads saying that illegal migrants shouldn’t be sexually violent toward women.

She virulently opposes abortion and multiculturalism. She said in a TV interview that she would “rather not have a gay child,” which is a much softer sentiment than Alessandra Mussolini’s fabled “better a fascist than a faggot.” Unlike Mussolini’s granddaughter, who just happens to be Sophia Loren’s niece and is also the first Italian woman to lead her own political party, Meloni has never posed topless for Playboy or recorded an album of love songs. And despite her surname literally meaning “melons,” Meloni isn’t even toting a pair of decent-sized peaches.

Ah, well. We men of culture can’t have it all, can we?

Italy is third behind Malta and Spain as far as having the lowest live births per woman amid all European countries. Meloni says native Italian women should start churning out more babies lest they face an “ethnic substitution” by migrants. Benito Mussolini also saw demography as destiny and helped to pass laws criminalizing even the act of passing along information about contraception.

Meloni’s party is, in a loose sense, apostolically descended from Mussolini’s brand of Italian fascism. Brothers of Italy (Fratella d’Italia), the party which Meloni helped found in 2012, was cobbled together from the pieces of Silvio Berlusconi’s short-lived People of Freedom Party, which itself was descended from the National Alliance (1995-2009), which succeeded the Italian Social Movement (1946-1995), which was formed amid the smoldering embers of World War II after Mussolini’s corpse was hanged upside-down in a village square.

In a 1996 interview with French TV, Meloni referred to Mussolini as “a good politician, the best the last 50 years.” In 2020 she praised Giorgio Almirante, co-founder of the Italian Social Movement who oversaw the publication of Mussolini’s Manifesto of Race in 1938.

A Brothers of Italy election manifesto from 2019 labeled George Soros as a “usurer,” and whether or not this is true, George Soros is Jewish, so it is automatically “anti-Semitic.”

Rachele Mussolini, another granddaughter of Il Duce, is a member of Brothers of Italy who was reelected to the Council of Rome last October with more votes than any other candidate.

Enrico Michetti, who was Brothers of Italy’s mayoral candidate last year, suggested swapping out handshakes for the Roman Salute to help battle transmission of COVID-19, so these obstreperous Dagos are making it difficult, if not impossible, to shake off the Mussolini/fascist associations entirely.

Over the years, Meloni has been very careful to declare that fascism is unequivocally dead and that she “unambiguously condemns the suppression of democracy and the ignominious anti-Jewish laws.” Just this week, the Brothers of Italy suspended a local candidate after news emerged that he’d referred to Hitler as a “great statesman” eight years ago.

Benito Mussolini, cursed by history into being a player-hater of Adolf Hitler in perpetuity, was himself a serial flip-flopper. He went from hardcore class-conscious Marxist to the father of modern fascism. He didn’t blame the Jews, then he blamed them, then he stopped blaming them again. He rejected racial essentialism, then embraced it, then discarded it again. He made several virulently anti-Christian statements, yet still cozied up to the Catholic Church because they had a tight grip on the nation’s majority.

The New York Times — which seems to be more worried about Meloni than Europe is — is terrified that once she’s elected, she’ll ditch all the half-stepping and start goose-stepping:

There remains concern that, once in power, Ms. Meloni would toss off her pro-European sheep’s wool and reveal her nationalist fangs — reverting to protectionism, caving in to her Putin-adoring coalition partners, rolling back gay rights and eroding liberal E.U. norms.

Electing her would be the only way to find out, right?

Yet another article whose headline suggests, word-for-fucking-word, that Meloni may become “Italy’s first far-right leader since Mussolini,” marvels at her party’s sudden rise to power:

In the course of the past four years, the party’s polling numbers have been steadily growing from a little over 4% in 2018 to over 25% in 2022. The trajectory suggests that the party has either shrugged off its historical links to fascism or that many Italians simply don’t care.

And that appears to be what The New York Times, the mainstream Western press, and all the dead-eyed suits at the European Union seem to fear the most: the day when they’ve made things so bad for ordinary citizens, the peasants “simply don’t care” about being called fascists. They simply want someone to clean up the mess.

» A Beginner’s Guide to the Jewish Question