Dugin’s Eurasianism Is Incompatible with Nationalism 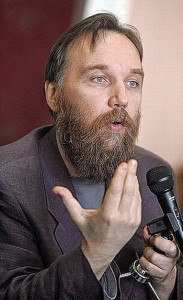 Front Populaire: You know Alexander Dugin. Can you explain to us who he is, especially on an intellectual level? What are his ideas, his philosophical and political influences, etc.?

Alain de Benoist: Alexander Dugin, whom I have known for more than 30 years, is a theoretician of Eurasianism. This current of thought appeared in the 1920s, both in Russian émigré circles (the “White Russians”) and in the early Soviet Union, within the framework of the quarrel between the Slavophiles and Occidentalists (Zapadniki) which divided the Russian elites as far back as the 1840s.

The Occidentalists saw modern Russia as the result of a “Westernization” of Russian society that began in the eighteenth century on the initiative of Peter the Great, while for Slavophiles, such as Alexis Khomiakov, Constantin Aksakov, or Ivan Kirevsky (in literature, we must of course also cite Dostoyevsky), the “real” Russia was the one before the Petrovian reforms, the Russia of the Moscow Patriarchate organized on the model of the conciliar unity of the Orthodox Church, and therefore had to combat the deleterious influences of Western Europe (rationalism, individualism, obsession with technical progress), which were seen as undermining the identity of the Russian people.

The Eurasianists, among whom figured such personalities as the linguists Nikolai Trubetzkoy, author of Europe and Humanity (“Europe” corresponding to the West), and Roman Jakobson, the economist Piotr N. Savitsky, the jurist and political scientist Nicolas N. Alexeiev, the historian and geopolitician George V. Vernadsky, and many others, believe like the Slavophiles that Russia and the West constitute totally different worlds, but they add new elements to this idea. According to them, Russian identity is based on the superposition, on a Slavo-Finno-Turanian substrate, of a “Kievan” culture, born in contact with the Varangians and strongly marked by Byzantine Christianity, and a “Muscovite” culture largely inherited, particularly as regards the forms of power, from the Tatar-Mongolian empire which dominated Russia for three centuries. Spiritually, Russia is Byzantine, therefore “eastern” (this is the theme of the “Third Rome”). Finally, for the Eurasianists Russia is neither a “country” nor a nation, but a distinct civilization of necessarily imperial form.

Alexander Dugin, born in 1962, belongs to the second Eurasianist generation. His main contribution to this school of thought stems from the importance he attaches to geopolitics, which he taught for a long time at Lomonosov University in Moscow (Fundamentals of Geopolitics, 1997), along with a visceral attachment to Orthodox mysticism (he himself belongs to the Starovere or “Old Believer” current of the Orthodox Church, born of the rejection of the reforms introduced in the seventeenth century by Patriarch Nikon), according to which religiosity must be based on faith, not on reason.

The English geopolitician Halford Mackinder, who died in 1947, had developed the idea (taken up by many others after him, starting with Carl Schmitt) of a fundamental opposition between the maritime powers and the land powers, the former having been successively represented by England and the United States, the latter by the great Eurasian continent, whose “heart,” the Heartland, corresponds to Germany and Russia. According to Mackinder, whoever manages to control the Heartland, controls the world. It is with this conviction in mind that Zbigniew Brzezinski, in The Grand Chessboard (1997), was able to write that “America must absolutely take over Ukraine, because Ukraine is the pivot of Russian power in Europe. Once Ukraine is separated from Russia, Russia will no longer be a threat.”

This makes it easier to understand Alexander Dugin’s political positions, since he sees not only in the confrontation between Ukraine and Russia a “fratricidal war,” but also a military projection of an ideological war that goes far beyond national borders, a world war between the liberal democracies —  which are today in crisis, and that are considered as ordered by the idea of ​​a universal State and bearers of decadence — and the illiberal democracies ordered by the idea of the ​​historical continuity of peoples wishing to maintain their own social forms and their sovereignty.

But to fully answer your question, we would also have to talk about the many authors who influenced Dugin. The latter, who is fluent in a good dozen languages ​​(which he learned on his own), very early became familiar with authors as different as the historian and geographer Lev Gumilev, son of the poetess Anna Akhmatova and the theoretician of “place-development” (mestorazvitiye); Arthur Moeller van den Bruck, the German “young conservative” supporter of an “orientation to the East,” Vico, Danilevski, Mircea Eliade, René Guénon, Jean Baudrillard, Marcel Mauss, Gilbert Durand, Claude Lévi-Strauss, Louis Dumont, Friedrich List, Heidegger, etc. But that is beyond the scope of our interview!

FP: In your book Against the Spirit of the Times, you write that you sympathize with his idea of ​​a “fourth political theory.” So what is this theory, and why do you find it interesting?

ADB: Three great competing political doctrines were successively engendered by modernity: liberalism in the eighteenth century, socialism in the nineteenth century, fascism in the twentieth century. In the book he devoted to this subject, Dugin develops the idea that it is necessary to bring out a “fourth political theory,” which would take stock of those which preceded it — without, however, identifying itself with any of them. It is a stimulating proposition for the mind.

In Dugin’s eyes, the twenty-first century will also be that of a fourth Nomos of the Earth (the general order of power relations on an international scale). The first Nomos, that of peoples living relatively apart from each other, ended with the discovery of the New World. The second Nomos, represented by the Eurocentric order of modern states (the Westphalian order), ended with the First World War. The third Nomos was the one that reigned from 1945, with the Yalta system and the American-Soviet condominium. What will the fourth Nomos be? For Dugin, either it will take the form of an American-centric unipolar world, or on the contrary that of a multipolar world where the “civilizational states” and the large continental spaces, both autonomous powers and crucibles of civilization, would play a regulatory role vis-à-vis globalization, thus preserving the diversity of lifestyles and cultures.

Dugin still believes that we have entered a Fourth World War. The First World War (1914-18) led to the dismantling of the Austro-Hungarian and Ottoman empires. The two big winners of the Second World War (1939-45) were the United States of America and Stalinist Russia. The Third World War corresponds to the Cold War (1945-89). It ended with the fall of the Berlin Wall and the disintegration of the Soviet system, mainly to the benefit of Washington. The Fourth World War began in 1991. It is the war of the United States against the rest of the world; a multifaceted war, military as well as economic, financial, technological, and cultural, inseparable from the general enthrallment of the world with the boundary-dissolving logic of capital.

FP: “Far Right,” “red-brown,” “anti-modern,” “ultra-nationalist,” “traditionalist,” “neo-fascist” are all terms used to define or refer to Dugin. Are these definitions relevant?

ADB: When journalists, whose culture in terms of political philosophy and the history of ideas is almost nil, are confronted with a phenomenon they understand nothing about, they mumble the dominant vulgate and recite mantras. The “extreme Right,” a rubber word, is the favorite Swiss army knife of these lazy minds. All these qualifiers — with the possible exception of “antimodern traditionalist,” but on the condition of understanding the term in Guénon’s sense — are simply ridiculous. They tell us nothing about Alexander Dugin, but tell a lot about those who employ them. The most grotesque is undoubtedly the moniker of “nationalist” or “ultra-nationalist,” which most commentators constantly use in reference to him. Dugin, I repeat, is a Eurasianist. But Eurasianism is incompatible with nationalism, since it embraces the idea of ​​Empire, that is to say the refusal in principle of the logic of ethnic nationalism and the nation-state (which also explains the close ties that Dugin maintains with representatives of the Jewish and Turkish-Muslim communities).

FP: For the past few days, Alexander Dugin has been presented a lot in the media as Putin’s “brain” in foreign policy, and as a kind of somewhat mysterious Rasputin. What is his level of influence with Putin? Is he listened to by Russian civil society?

ADB: Putin’s “brain!” The fact that Dugin and Putin have never met once face-to-face is a good measure of the seriousness of those who use this expression. The reality is more prosaic. Alexander Dugin, who has been translated into ten or twelve different languages, is a well-known and widely read author, both in Russia and abroad. He has his networks and his influence. Back in April 1992, when I had the opportunity to give a press conference at the Pravda headquarters in Moscow and to discuss geopolitics with generals and senior army officers, I could already hear the resonance of Eurasianist ideas within public opinion. Since then, Dugin launched the International Eurasianist Movement in 2003, which has greatly developed among the non-Russian populations of Russia, and he was even received in Washington by Zbigniew Brzezinski and Francis Fukuyama.

Dugin undoubtedly knows Putin’s entourage well, but he was never one of his intimates or his “special advisers.” He is certainly grateful to Putin for having broken with Boris Yeltsin’s liberal Atlanticism, but he thinks that he is only a “Eurasianist in spite of himself.” The book he wrote a few years ago on Putin [Putin vs. Putin –Tr.] is far from being an exercise in admiration: Dugin on the contrary explains both what he approves of in Putin and what he dislikes. But obviously those who hold forth in France about him have never read a line of his.

FP: You know Alexander Dugin and his work well. You also recently published a critical work on the media entitled Surviving Disinformation (2021). How do you judge Dugin’s overall treatment in the media and that of the Russian-Ukrainian conflict?

ADB: The media’s treatment is what you know. The major French media are so accustomed to relaying the dominant ideology, they find it so normal that there are no longer any debates worthy of the name in this country, that it seems to them just as natural to never give a voice to those whose ideas they ignore or caricature. This is as true in the case of Dugin as in that of the war in Ukraine: the Ukrainian point of view is omnipresent; the Russian point of view is not even mentioned. This creates a tremendous repression. Always be wary of the repressed.