The African Origin of Civilization

The Metropolitan Museum of Art is currently staging an exhibition entitled “The African Origin of Civilization.” Inspired by Cheikh Anta Diop’s eponymous book, one of Afrocentrism’s central texts, it juxtaposes African artifacts dating mostly from the eighteenth through the twentieth centuries with ancient Egyptian artifacts. The obvious aim of the exhibition is to imply the existence of biological and cultural ties between sub-Saharan Africa and ancient Egypt. This notion is discredited even among mainstream scholars.

The exhibition showcases 21 pairs of objects, each with a different theme. The juxtaposition of ancient Egyptian and modern African artifacts has the opposite of the intended effect upon the viewer. The exhibition fails to illuminate any supposed similarities between ancient Egyptian and sub-Saharan African art. The curators strain to evoke a resemblance where there is none.

Despite having been created much earlier, the Egyptian artifacts evince a greater degree of craftsmanship than their sub-Saharan counterparts, and viewing them side by side makes this all the more apparent. One example of this is the juxtaposition of a figurine of Isis nursing Horus with an African sculpture depicting a mother and her child. The figurine, which dates from the Ptolemaic period, is proportional and elegantly carved, while its African counterpart, created about two thousand years later, is, to be blunt, ugly. The contour of the sculpture is crude, and the mother’s protruding jaw and sagging breasts are difficult to look at.

In another pairing, a graceful sphinx dating from Egypt’s Late Period is juxtaposed with a nondescript African headdress, also about a century old. The African sculpture shown below was created nearly 4,500 years later than the Fourth Dynasty statue with which it is paired, but it looks like it was made much earlier (though we are assured it was carved with the precision of a “mathematical equation”). 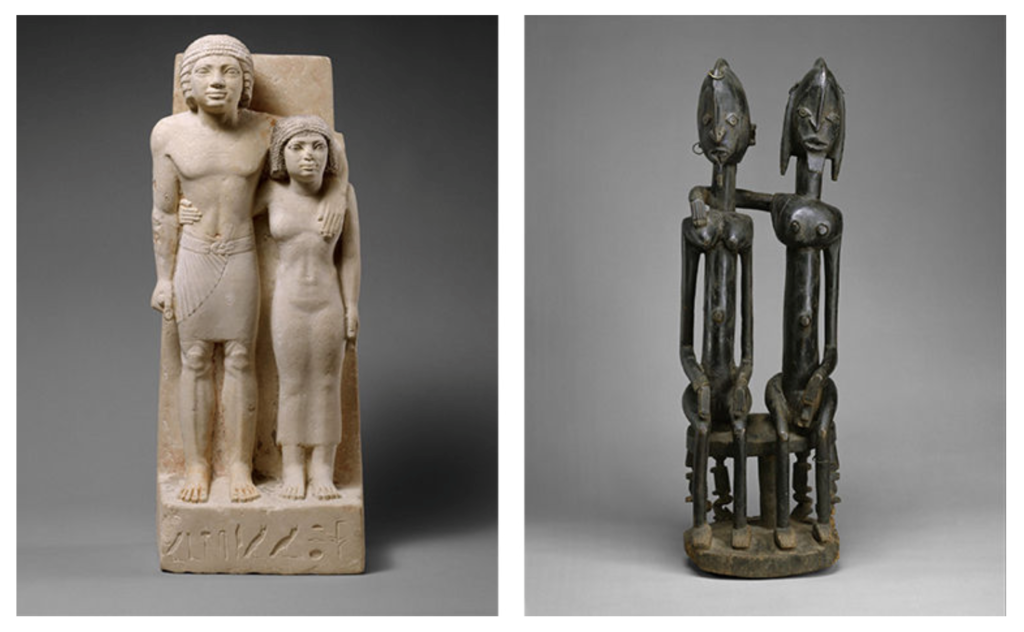 Statue of Memi and Sabu (ca. 2575-2465 BC) vs. Dogon sculpture of a seated couple (eighteenth-early nineteenth century)

The exhibition also highlights the phenotypic differences between ancient Egyptians and sub-Saharan Africans, juxtaposing the face of Middle Kingdom Pharaoh Senwosret III (a fragment from a temple statue) with the bust of a Nigerian ruler (oba). The two men could not look more different. Senwosret has thin lips, a relatively thin nose, and angular eye orbits, while the oba has a wide nose, thick lips, and rounder eye orbits. In short, Senwosret has Caucasoid features, while the oba has Negroid features. 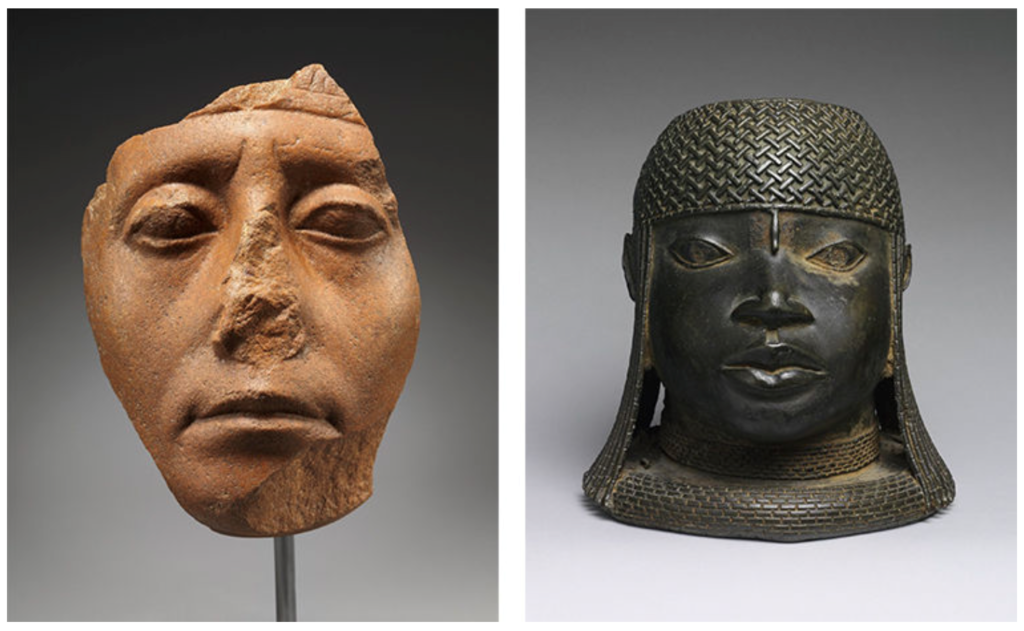 What conclusions is the viewer meant to draw from these pairings, precisely? The wall labels are of no help. They mostly just describe the history of the Met’s Egyptian and African collections.

A museum exhibition comparing the art of two different civilizations is an interesting concept, but it is the curators’ role to shed light on what such comparisons reveal. Simply assembling objects together in a more or less random fashion and making a vague pronouncement about their shared history shows a lack of intellectual rigor and discernment.

It’s a mystery how the exhibition, described as an “homage” to Diop, conveys parallels between sub-Saharan Africa and ancient Egypt and validates Diop’s Afrocentrist worldview. There are no stylistic similarities among the objects on display; the similarities are only thematic. Given that the African artifacts displayed are much younger than their Egyptian counterparts, they obviously cannot support the claim that sub-Saharan Africans influenced the Egyptians, or, as Diop claims in The African Origin of Civilization: Myth or Reality, that the Egyptians were themselves of sub-Saharan ancestry. The Met acknowledges this but nonetheless claims that the works on display “share deep and underrecognized histories.” No elaboration is provided.

Diop, writing amid African countries’ struggle to obtain independence from colonial powers, had a political incentive to characterize Egypt as an African civilization, and a political motive is similarly evident here. The curators likely are aware of the exhibition’s inconsistencies but are indifferent to them — they simply want to draw up a vague association between sub-Saharan Africa and Egypt to make a political statement.

An even more egregious example of this is the Met’s installation of African artworks in galleries across the museum. These “guest appearances” are supposed to illuminate “unexpected cross-cultural connections” between Africa and other cultures. For instance, a nineteenth-century sculpture from the Congo was placed beside the well-known “New York kouros,” an ancient Greek statue of an aristocratic Athenian youth. There are no connections to be found here. The point of this juxtaposition is presumably to make a statement about how African artworks belong alongside the art of great civilizations, but it only highlights the fact that the stumpy wooden fellow looks rather out of place in a sea of Greek statues. It looks like he was wandering around the museum and got lost. Is this an elaborate troll? 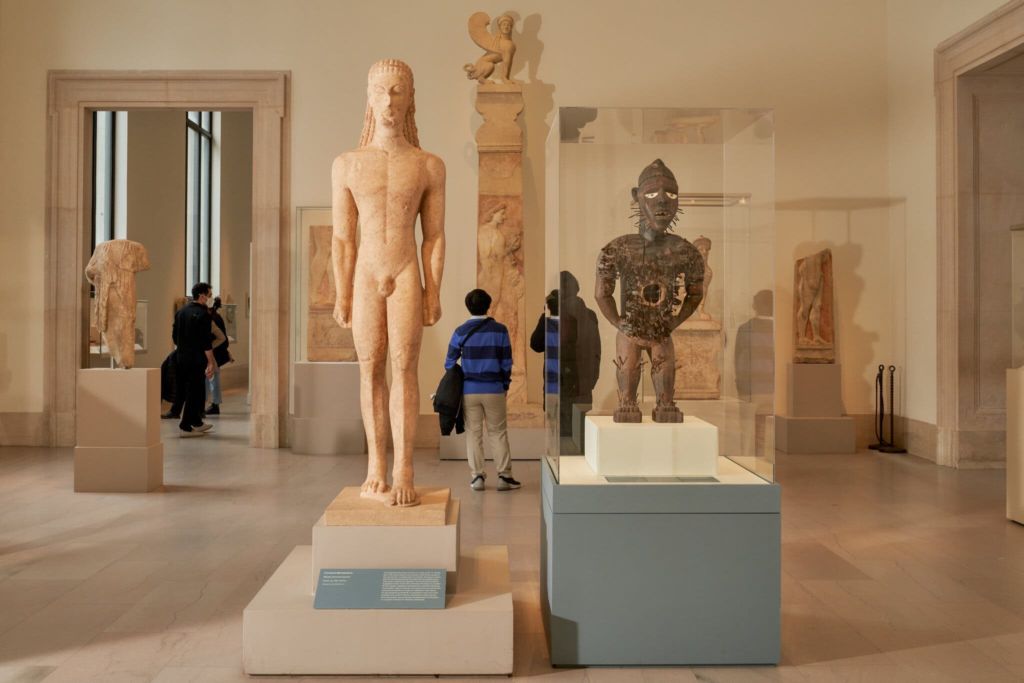 Marble statue of a youth (590-580 BC) vs. “Mangaaka Power Figure” (nineteenth century)
Credit: Seth Caplan for The New York Times

The youth’s erect stance and foot placement call to mind Egyptian statues, including, coincidentally, two items displayed in “The African Origin of Civilization” — an Old Kingdom ka statue of a nude male and a Middle Kingdom statuette. Indeed, the kouros is a good example of Egyptian influence on ancient Greek art, which came about as a result of the founding of Naucratis, a Greek trading post in the Nile Delta, in the seventh century BC. In the exhibition, the Egyptian nude figure is juxtaposed with the sculpture below. Again, it’s not clear what the point of this comparison is. Why not juxtapose the Egyptian figure with the kouros instead? I suppose that would have made too much sense. 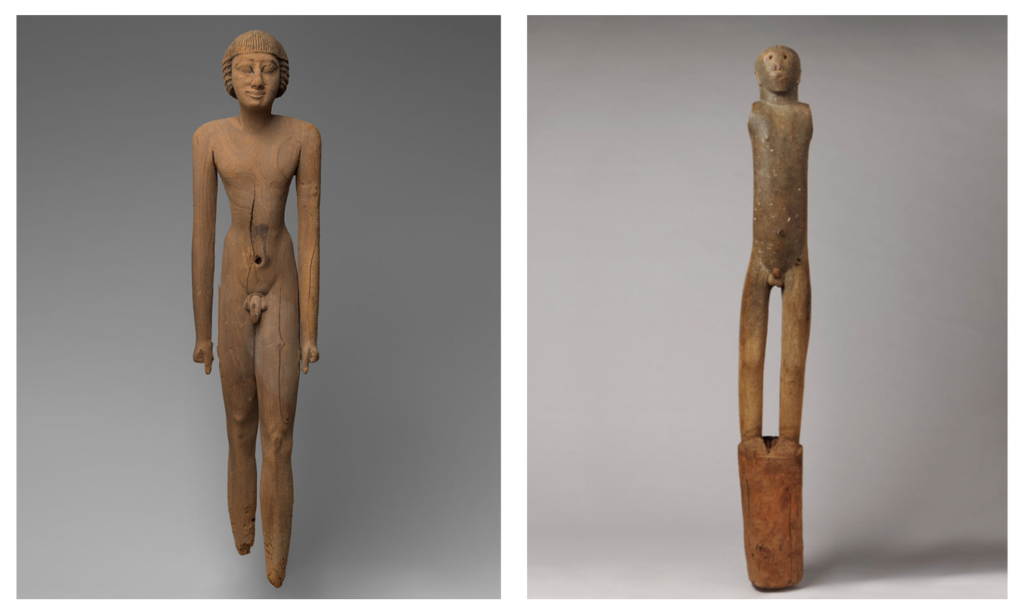 There are many challenges one could pose to Diop’s thesis, but the most conclusive evidence against it comes from genomic information gleaned from mummies’ bones and teeth. The ancient Egyptians had very little in common genetically with sub-Saharan Africans. They most resembled Neolithic samples from the Eastern Mediterranean and Anatolia, as well as both ancient and modern European populations. Interestingly, the ancient Egyptians were genetically closer to Europeans than they were to modern Egyptians, who have a substantial degree of sub-Saharan admixture. Their genetic composition remained remarkably stable over the course of their history, and the flow of sub-Saharan DNA into Egypt did not occur until after the Roman period.

Blacks can be forgiven for wanting a uniting racial myth based on a great past, but their fantasies should not be enabled by the largest museum of art in North America. The fact that the Met is willing to promote discredited theories in order to make a political statement is an embarrassment to the museum. The exhibition is so risible and mushy-headed that one would be forgiven for wondering if the curators are secret White Nationalists who wanted to poke fun at Afrocentrists.

The impetus for this exhibition, and the installations in other galleries, was the recent closure and ongoing renovation of the Met’s Michael C. Rockefeller Wing, which houses their collections of art from Africa, Oceania, and the Americas. The story of Michael C. Rockefeller is interesting and darkly ironic. The fifth child of Nelson Rockefeller, he had an interest in ethnography and collected many of the New Guinean artifacts on display at the Met. At 23, he disappeared while on an expedition to the Asmat region of New Guinea. It is highly likely that he was killed and eaten by natives who practiced cannibalism and who wanted to exact revenge on white people after some of their leaders were killed by Dutch colonial officials. Hooray for diversity! In all seriousness, this anecdote illustrates the cold reality that some peoples are profoundly different from us, and to pretend otherwise is silly at best and dangerous at worst. The premise of “The African Origin of Civilization” is wacky and flaky rather than dangerous, but its naïveté can, in other contexts, be deadly.

Despite the curators’ wishes, “The African Origin of Civilization” serves as a decent crash course on differences between ancient Egypt and sub-Saharan Africa. In that sense, it is instructive. Ancient Egypt was a Mediterranean civilization and was genetically and culturally very different from the rest of Africa. The juxtaposition of Egyptian and sub-Saharan artifacts makes this clear.