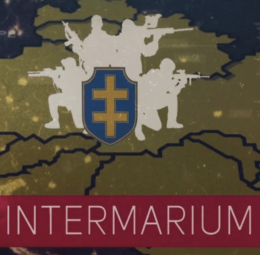 As I have written before, while it is an undeniable truth that NATO and even the European Union, which is much worse than NATO, is preferable to the Russian Federation due to the incontestable fact that pro-white organizations can operate more freely in the former than in the latter, my ideal scenario is Eastern Europe breaking away from NATO and forming its own military alliance with its headquarters in Warsaw, consisting of the following countries in no particular order: Finland, Estonia, Latvia, Lithuania, Poland, Ukraine, Czechia, Hungary, Slovakia, Croatia, Romania, Bulgaria, Slovenia, Romania, and Moldova.

I know this idea is currently a longshot. The Russian invasion of a non-NATO country has given NATO more credibility in the eyes of Eastern Europe than ever before. However, it is still something that should be striven towards. Poland is a true power, on the brink of being a Great Power — maybe not internationally, but certainly regionally. Poland and Czechia already have significant arms industries. Romania has oil. Azerbaijan and Norway are also two countries in close proximity to this Intermarium Alliance that could prove to be significant strategic allies, as Azerbaijan is rich in natural gas and Norway is rich in oil.

I often envision this Intermarium Alliance being expanded to several other countries: the Nordic countries, the United Kingdom, and so on. I do not think that this should be pursued at this moment, however. What all the countries I listed above have in common, which is what’s needed for a truly motivated military alliance, is this:

They have skin in the game because all of these countries have felt the boot of Russian imperialism before and are motivated to fight against it. Also, the vast majority of these countries are in such close proximity to Russia that their national security revolves around keeping the Russian Federation at bay.

Liberalism is not as strong in these countries as it is in Sweden, the United Kingdom, and so on. While I think the alliance should primarily be focused on the military and allow each country to chart its own domestic course, it is undeniable that they also share a sort of bond in the sense of wishing to preserve their extremely varied local cultures and peoples, and do not wish to end up like the Russian Federation or France: a mixed-race, identityless hodgepodge of dozens of ethnic groups and cultures (I am not saying white French are mixed-race; I am saying your country is, and Russia is in fact the most extreme example of this, contrary to what Anglosphere Russian shills say or think).

An alliance between these countries would be an indescribable beacon of hope to the entire white world, from Europe to Australia, to North and South America (South America is not a majority white continent, of course, but there are millions of whites in South America all the same, so it should not be forgotten), to South Africa.

This alliance would preserve a 98% white populace of over 150 million against the rot from the west and east.

It would galvanize the world’s entire White Nationalist population. The racial implications worldwide are hard to calculate. I cannot overstate how momentous such a thing would be. Such an alliance, even if it is solely focused on the military, has implicit racial and cultural implications that nobody in the world, white or non-white, would fail to recognize. The paradigm of the entire world would be changed, and White Power would once again become a reality for the world to deal with for the first time since the 1940s.

So, what is the best strategy for turning this dream into reality? First of all, let’s recognize how difficult a task it is.

NATO’s legitimacy in Eastern Europe is higher than ever, and it is obviously an inherent truth that those who are in power are not revolutionaries, and this is a revolutionary ideal. Those who wish to bring this into reality must start small, and be prepared to work for years to make it so. I believe this is the best path forward, for now.

Like I said, those who are in power are not revolutionaries; that is obvious. Therefore, you cannot rely on your governments and the mainstream (whatever that means within the context of your nation) politicians to make this a reality. It must begin as a grassroots movement.

From there, there are two simultaneous steps that must be taken, which should then form into a third step. Steps 1 and 2 are simultaneous, while step 3 should be taken after steps 1 and 2 bear some fruit.

These unions do not have to be political, since as I said we are not in a position of holding state power, so we need to think and act like it.

Finnish and Estonian nationalists should seek to create a Finnic Cultural Festival held the first year in Helsinki, the next in Tallinn, the next in Helsinki, and so on promoting the Finnic language, culture, identity, and history.

Estonian, Latvian, and Lithuanian nationalists should form closer ties and seek to promote the message of an Intermarium Alliance within the Baltic Assembly.

Lithuanian and Polish nationalists should form closer ties based on their shared Catholic identity.

Czech, Hungarian, Polish, and Slovakian nationalists should form closer ties based on the shared membership of their nations in the Visegrád Group.

You get the idea. Start small, with localized grassroots efforts, and slowly build on that. Use these several localized ethnic-cultural-religious-historical unions as a platform to form an Intermarium Congress, not relying on government officials (unless they wish to interact with it, in which case it is great), but instead made up of grassroots nationalists who do not draw a salary but who participate out of noble idealism.

It may be that many of these unions and others like it already exist, in which case you should either join to influence them in the direction of Intermarium, or create competing ones if they do not share this goal. A Finnic cultural festival whose only goal is Finnic identity is nice, but it’s not the same as those unions being formed and led by pro-Intermarium Nationalists. These unions must be operated by Intermarium nationalists with the specific end goal of bringing an Intermarium Alliance into reality.

I would also like to stress that this project should not seek to destroy national identities, but protect them by ensconcing them in a military-political union where the interests of the native peoples and cultures is determined by the countries themselves rather than any outside power. Both under the Russian Federation or NATO/EU, the identity of these nations would be in danger. Let an Intermarium Alliance instead protect these peoples by sharing foreign policy and collective security, and allowing each individual nation to chart its own domestic course.

I want to stress again the importance of thinking long-term and acting short-term, and not letting the lack of immediate achievement of these goals demoralize you and cause you to stop working on this project. Too many people in our community suffer from grandiose visions without the proper thought being given to the immediate next step, which is something they could actually accomplish. They get a few people together in one type of project or another, and the next day they are discussing in Internet chatrooms what the trade policy of a European Empire would be with China and India while not actually doing anything concrete to work towards a specific goal.

The Intermarium is a radical idea, but it must be enacted pragmatically. This is a rough sketch of what I think is the best way forward for now. Start small and focus your efforts on the immediate next step while keeping your mind on the big picture, and make sure each small step is building in the right direction for the achievement of your goals. Understand that this will be a years-long struggle. If the Intermarium Alliance comes into reality ten years from now, I will consider that to be incredibly fast. Strap in for the long haul.

As I said before, I think this alliance, when it comes into reality — which it will, despite its tremendous difficulty of it, if we have the will to truly struggle and work for it — should be based in Poland, as Poland would be the most powerful member of this alliance (with Ukraine and Finland not far behind).

Let the future of the white race, at least in Eastern Europe, be determined by an alliance of white men and women centered in Warsaw, not Zionists in Washington or mixed-race antifa in Moscow.

» An Uncomfortable Conversation about Race