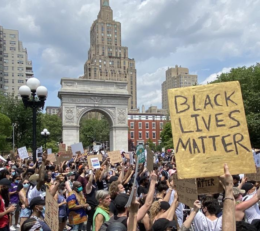 When protesters began chanting “Black Lives Matter,” my first reaction was disgust at the brazen effrontery of that slogan. Imagine a movement to legalize pedophilia calling itself “We Love Kids.” Nobody disagrees with loving kids in the abstract, but most people oppose letting perverts get away with raping them. Calling such a movement “We Love Kids” puts critics at a disadvantage when they have to begin, “Yes, we love kids too, but . . .”

The same is true of Black Lives Matter. Black Lives Matter should be called Black Thugs Matter. BLM does not champion black victims of black crime. It does not rally to stop blacks from killing themselves with drugs, alcohol, and menthols. It does not try to protect blacks from vicious dogs, abortionists, incompetent doctors, or abusive nursing home staffers. BLM’s principal activity is rioting when black criminals die in encounters with the police or victims who fight back.

BLM’s goal is to make it safer for blacks to commit crimes and more dangerous for cops to arrest them. The entirely predictable and obvious outcome of BLM’s efforts is more black crime. Politicians and reporters with above-average IQs pretend not to understand this. But black thugs with IQs of 85 understand incentives. So do policemen. The result has been an explosion of violence that Heather MacDonald has labeled “the Ferguson effect.” It should simply be called the Black Lives Matter effect.

“Black Lives Matter” has turned out to be a very expensive, destructive, and deadly slogan. Thus we have to screw up our courage to question it. Yet not even the most cold-hearted racist would flatly deny that “black lives matter.” Even people who think blacks are a cancer on the planet still grant that their lives matter to someone. Even though I don’t want to share a country with black people, I still think their lives matter enough to have basic human rights.

So how do you respond to the assertion that black lives matter?

If you take the “yes, but . . .” approach, you’d better make it count: “Yes, ‘black lives matter,’ but . . . some lives matter more than others. Trayvon Martin, Michael Brown, Ahmaud Arbery, George Floyd, and other BLM martyrs were criminal scum. Their lives matter less than the lives of the good people they victimized. If you champion such trash, you’re either stupid, crazy, or evil.” I’m betting BLM’s leaders are evil. They are cynics trying to gaslight morons into acts of violence or guilt-trip them into giveaways.

But it is worth triggering some shrieking. You won’t find it edifying, but many in your audience will. Even if it be only silently, in the privacy of their own thoughts, many of them will draw the conclusion “They’ve got nothing” then quietly back away.

Note that BLM’s accusation assumes that — like children and pets — blacks have no agency or responsibility when bad things happen to them. Why are children abused? Because adults don’t value their lives enough. Why are pets abused? Because their owners don’t value their lives enough. Why do black people suffer? Because white people don’t think that black lives matter enough. Note also that white people — like parents or pet owners — are attributed complete agency and responsibility when it comes to the well-being of their wards.

It is childish for blacks to take credit for the things that please them while blaming their suffering on whites. But denying all moral agency to blacks is not entirely absurd. First, the average black American has an IQ of 85. Very large numbers of black Americans have IQs of 70 or below, which for white people is the cut-off for mental retardation. They are adults with the minds of children and thus should not be held responsible under the law. Second, large numbers of blacks are incarcerated for crimes, during which time they are wards of the state. So is it really such a stretch for white people to take complete responsibility for blacks in America? Isn’t this what BLM is basically demanding? And doesn’t it cohere nicely with white liberal paternalism toward blacks? Aren’t American policies toward blacks basically a glorified form of babysitting?

But I don’t think BLM has really thought this through. As I already pointed out, blacks only want to be absolved of blame and punishments, not praise and rewards. Beyond that, if whites take full responsibility for blacks, we need to make their decisions for them, just as we do for children. But what if they complain? So what? They aren’t legal adults, so as long as something is in their best interest, their consent is neither possible nor necessary.

Of course, in this scenario, black consent would also not be required if whites decided that racial separation is best for everyone and resolved to send black Americans to their own homeland. I personally prefer offering blacks incentives to voluntarily separate, but I admit that making them wards of the state would certainly expedite the process.

It is easy to establish that black people hold their lives rather cheap. Despite being 13% of the US population, blacks have long committed 50% or more of the murders. Based on the FBI’s 2019 statistics, blacks committed 55.9% of murders. As Barack Obama might say, they are sucker-punching above their weight. Because of the collapse of policing due to Black Lives Matter in 2020, murders have skyrocketed in black areas (gun murders up 34.4%), so the 2020 statistics will likely be much higher.

The vast majority of black murderers pick black victims, even though blacks are also far more likely to murder whites than whites are to murder blacks: blacks were 54.7% of murder victims in 2019; in 2018, 70.3% of black homicide victims were killed by other blacks, while only 10.6% were killed by whites; in the same year, 15% of white murder victims were killed by blacks; this is despite the fact that the white population is more than five times the size of the black population. Obviously, black people hold other black lives very cheap.

But those are other black lives. Surely black people hold their own lives very dear. No, not really.

Blacks suffer from high rates of crime, poverty, drug- and alcohol-related problems, unplanned pregnancies, sexually transmitted diseases, and general proneness to accidents. All of these problems spring, in part, from a tendency to think about the present and ignore the future. Economists and psychologists call discounting the future for present pleasures “high time preferences.” High black time preferences are well-documented across the board. See the appendix on “Time Preferences” in Michael Levin, Why Race Matters (Oakton, Virginia: New Century Books, 2016). High time preferences amount to a form of heedlessness of the long-term consequences of present-day actions, which means that one’s one future — one’s own life outside the present — matters less than momentary pleasures in the now.

Isn’t there something grotesque about the cult that has grown up around George Floyd in the year since his death? After all, Floyd was a career criminal and a drug abuser. He also fathered and abandoned at least five children with various women. At the time of his death, he was walking around with Covid-19. These behaviors reveal that Floyd rated present pleasures very highly while holding the lives of others, as well as his own long-term survival, very cheap. Floyd died because he was high on methamphetamine and fentanyl, capering around a store with a banana in his hand, trying to pass a counterfeit $20 bill. When police approached him as he sat behind the wheel of a car that he was too stoned to drive safely, he gobbled down even more drugs, dying of an overdose while being restrained for resisting arrest. Floyd was not murdered. He died of the predictable consequences of his own bad decisions. Taking a lethal dose of meth and fentanyl is suicidal behavior, as is resisting arrest. If George Floyd’s life mattered more to him, he would be alive today.

You people treating George Floyd as a saint look like fools. At best, you are fools. At worst, you are cynics manipulating fools to benefit yourselves while harming society as a whole. You’re probably too stupid, crazy, or evil to be trusted with any civic responsibilities. I’d take away your votes at the very least.

When people engage in suicidal behavior, we assume that they are out of their minds and feel entitled to intervene. When that happens, we feel quite self-righteous about the fact that these people’s lives matter more to us than to them. We are operating, however, on the assumption that we are dealing with a psychological emergency. When the emergency is over and the victim is back in his right mind, we can end our paternalistic intervention and go back to normal.

But what if it is normal for whites and blacks to value black lives differently? What if black lives will always matter more to us than to blacks themselves? Do we really want to commit ourselves to a permanent state of emergency, to permanent paternalism, to permanent babysitting? Isn’t there something presumptuous and ethnocentric for whites to declare that we, not blacks, are the arbiters of how much black lives matter? Isn’t this just another version of benevolent colonialism, what Kipling called “the white man’s burden”? Don’t you think that blacks would eventually find such a situation oppressive? In fact, they already do.

But the only way to stop “oppressing” blacks is to abandon civilized — i.e., white — standards of behavior. That is, in effect, what BLM has already accomplished. The results are clear: a crime wave in black neighborhoods, increasingly numerous and savage black attacks on whites, and the abandonment of fair trials, e.g., the open intimidation of a jury into convicting Derek Chauvin. Eventually, it will dawn on even liberal whites that blacks are a retarding force on civilization. White Nationalists reached that conclusion a long time ago.

Fortunately, there is a solution. Whites and blacks in America have irreconcilable differences. When a married couple has such differences, the solution is divorce. After four centuries of racial conflict and resentment in America, we need to start listening to reason rather than hope. It is time for blacks and whites to seek a racial divorce. We need separate, independent nations for blacks and whites in North America.

« “All the Devils Are Here!” The Great Storm & Shipwreck Story

» Fundraiser Update & this Weekend’s LivestreamHappy Birthday to Us!