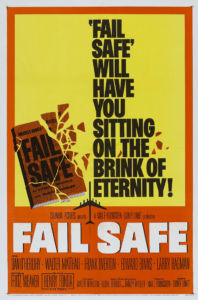 Unlike many moviegoers, I was never that enthusiastic about Dr. Strangelove, Stanley Kubrick’s response to the arms race. I remember that back in the 1980s, a girlfriend and I saw the film and she thought it made light of a serious issue. This was at the height of President Reagan’s sending more missiles to Europe, his Star Wars missile defense plan, and everyone’s lugubrious viewing of The Day After.