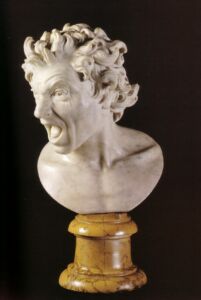 One of my internet friends (you know who you are) recently posted a picture of Ted Kaczynski along with text claiming that “you can’t pay reparations if you don’t have any money.” Well, that’s technically true. You can’t pay buttfuck nothing if you don’t have any money, but the curious nature of money means that people will often own negative money, which is to say owe money. So, the theme for today shall be how things can always get worse, and that there’s such a thing as worse than nothing. Now, I’ve been informed by the Counter-Currents legal team that forcing blackpill after blackpill down the throats of our esteemed leadership is very bad for fundraising morale, but honor is honor and honor demands that we face the truth with all the choleric and cantankerous curmudgeonry our pancreatic glands can muster.

Way back in the old times, when the specter of communism stalked the Earth, the name of the game was redistribution. The rich had too much, the poor had too little, and therefore, we had to take from the rich and give to the poor, so that the poor may have more — and even more importantly, so that the rich may have less. Now you may agree or disagree with that, and I’m sure we’ll have some spirited and opinionated discourse in the comments, but the fact of the matter is that such a scheme is at least feasible. When my country fell to communism and my family found themselves on the wrong end of redistribution, the communists took the fields, the flocks, the hunting grounds, the orchards, the graze lands, the shops, the trucks, the transport company, they took everything but the house and then they took two floors of the house as well, and my family had to start, as they had two generations prior, from nothing. My great-grandfather, once the heir to a landed estate stretching as far as the eye could see, had to tend sheep to feed his family.

Right now, the specter of liberalism stalks the Earth. Liberalism, resting as it does on the assumption of human egalitarianism, that all men are created equal, needs to either erase or pathologize all distinctions between people. Distinction persists, so it must be due to prejudice, which is the preeminent and purportedly most prevalent pathology of modernity. Obviously, white people, being full of prejudice, cause those poor nonwhites to underperform, and furthermore, the system itself is racist (systemic racism) because it was built by white people to favor white people. The only way to fix this pathology is to introduce a counterweight to the system to correct for its systemic bias against nonwhites. The same solution can also help ameliorate past grievances, such as slavery. We can therefore balance out the books of society and achieve genuine equity through the introduction of reparations.

Equality of opportunity is impossible, first of all because people bequeath wealth to their children (remember that landed estate that my great-grandfather was set to inherit?), second because of innate human inequality in parameters of body and mind. I have a friend who is short and small-framed, but is pound-for-pound the strongest person I know. However, in a fight between the two of us, none of it would matter.

I am so much larger than him by birth, that even when out of shape, I could easily kill him with a punch.

We are simply 4 weight classes apart, and no amount of effort is ever going to change that. His 110% is significantly less than my 30%. The gulfs in performance are even vaster in the mental realm. Many of my college friends resented me for being able to coast to passing grades on nothing but my intellect, charisma, and family connections. But that’s college, right? In the real world, diligence and effort count. Wrong. Yes, you’re a hard-working and ambitious young man, but Nick’s jokes make me laugh with my belly, and besides, I know his dad from the Embassy soiree. To speak of equality of opportunity in such a world is a cruel joke played on the disadvantaged, and yet to fix these inequalities would mean bringing about the world of Harrison Bergeron (which is notably worse than communism, past and present, as practiced anywhere on the planet).

“Equity” is the exoteric version of what the anti-white coalition would like to implement; it is the sales pitch that ropes guilty whites into the anti-white coalition. People like me who are simply born smart, charismatic, and into wealthy and influential families always have the nagging worm of guilt in our minds that we don’t really “deserve” what we have. This is because we still believe, as a culture, in meritocracy. By the standards of meritocracy, you don’t really “deserve” it, no more than I deserve my naturally large frame and intimidating beard.

So, what’s the result of having while finding oneself undeserving — and everyone is undeserving under the impossible standard of meritocracy?

Guilt. Guilt can then be directed into self-effacement and self-flagellation, indeed, self-pauperization in order to achieve “equity,” which is supposed to be equality of outcome. Of course, equality of outcome is so last decade. The fact of the matter is that we’d be lucky to get equality of outcome at this point. What the enemy wants at this point is for nonwhites to win and whites to lose in every iteration of the game, to make up for past wrongs (this is the story for guilty white liberals), or just to make whitey squirm (this is the story for ascendant nonwhites).

In order for the game to be resolved to the satisfaction of the enemy, whites will have to bind themselves in debt slavery to nonwhites. Some rich white people can perhaps buy indulgences, maybe give away money, but what about poor white people? What about the white middle class? How do they atone for the sin of whiteness? Obviously, they’ll have to become the bondsmen of the oppressed, perhaps even become debt slaves. Maybe not directly, but certainly through the mediation of the bureaucracy, both state and private. I can already hear the Silicon Valley oligarchs licking their chops — indentured white engineers.

Another important thing to keep in mind is that we won’t be able to win merely on the back of economic action. Who cares if you’ve sequestered yourself from the system if the system can just force you back into its fold. The relationship between white people and the anti-white system has been described as borderline attachment: I hate you — don’t leave me. Without white people to milk, the system will crash, but white people by our very presence incite the rabble to envy, and there are many of our number who are infected with pathological understanding of human inequality, leading them to work towards their own destruction and the destruction of white people in general. Victory will come from seizing state power and then using state power to construct a system beneficial to our people.

So, now that I’ve told you, like Aesop’s mouse council, that the key to defeating the cat is to tie a bell to its neck, let today’s lesson be that it can always get worse, and that it can get much, much worse than nothing, and that things will be getting worse until such a time that we win and are able to establish a system that favors white people.