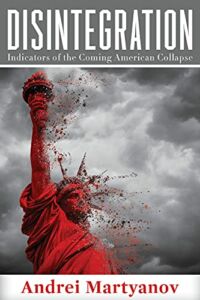 Recently, I had to drive through my Rust Belt homeland to pick up some antique oak furniture that was part of an inheritance. My relatives who still lived in the area had spent the last COVID-19 infected year volunteering at a drive-in food pantry. Desperate people with rotten teeth would wait in line for a considerable amount of time to get free food.

Food insecurity is now part of the American norm, but instead of a thin population, people are both obese and malnourished. Healthy food is expensive while fattening food — mostly based around some form of sugar — is cheap.

Part of the reason for this unusual circumstance is an underemployed population. On my way home to my McMansion in the Anywhere part of the country from my Somewhere homeland, I drove through many small towns with abandoned factories and rusting machines. Not too long ago, this land was flowing with milk and honey. Today, it has the marks of wanton poverty.

The problems seen by me on a routine cross-country drive highlight some troubling indicators in American society pointed out by Andrei Martyanov, a blogger and scholar of Russian and American affairs. Martyanov has his own blog and has written for the Unz Review.

Martyanov argues that the United States is headed for collapse. He starts his book off by pointing out a major problem: the moral and intellectual failures of America’s political elite. A perfect example was when America’s “intelligence community” claimed President Trump was tolerating a Russian policy of paying Taliban fighters to kill Americans deployed to Afghanistan. The story was fake news. It also demonstrated the “intelligence community” and media was partisan, deceptive, and inept. Not only did they fail to understand the Russian desire for Americans to remain bogged down in Afghanistan, but underemployed Americans from the heartland were also able to see through the lies.

In addition to the opioid crisis, Americans now have a drinking problem. Since the COVID-19 plague started, alcohol use has increased 300%. American’s aren’t just consuming too much booze, they are consuming too much in general. Debt is up and savings are down. Americans buy groceries with their credit cards.

According to Martyanov, the problem started when the Clinton administration doubled down on his predecessor’s “free trade” policies. NAFTA and WTO enabled China to destroy American industry. Deindustrialization has negative after-effects. One manufacturing job creates more than three non-manufacturing jobs while the opposite is not the case.

There is a sense that the wounds are self-inflicted. South Korea has captured the shipbuilding market while American infantrymen defend that nation year after year from what has become a phantom threat.

America’s economy is also overvalued. There is puff and fluff on accountants’ books across the land. Additionally, America’s military edge is fading fast. Russian Bear bombers can launch cruise missiles from over the Caspian Sea that can hit ships in the Gulf of Oman as well as American bases in Qatar.

Russian technological prowess is considerable outside of military affairs. Russian rockets resupply the International Space Station. Russian aircraft threaten to capture the global market for passenger aircraft. Russian cyberwarfare specialists are at the top of their game.

Russia has also cleverly outmaneuvered the United States in the oil-selling game. To make a long story short, they’ve undercut prices enough that American oil companies can’t compete. The oil boom is over.

Regarding oil and pipelines, events have moved quickly beyond what Martyanov describes in his book. German environmentalist laws have made energy prices there so high that the nation is at risk of deindustrializing. The Russians have constructed the Nord Stream 2 pipeline, which will help German industry stay competitive and allow Russia to gain petro-revenues.

This pipeline alters the geostrategic balance of power in Europe. Eastern European nations are more vulnerable to Russia while Germany is dependent upon Russia for its energy. Several American administrations have used sanctions to keep the pipeline from finalization, but after the 2021 Colonial Pipeline cyberattack, the Biden administration yielded and Nord Stream 2 is set to become operational.

It is impossible to predict how this will impact American, Russian, and European relationships, but the situation in Europe has changed and American reindustrialization is made more difficult by competitive German industry.

The most serious problem within America’s political elite is a pseudo-intellectualism in the highest reaches of academia and government. This pseudo-intellectualism puts forward the concepts that created the Iraq War, BLM terrorism, and involvement in Syria. It is also infantile. Political debate in America is childlike. American elites also cannot envision the likely results of their ideas. For example, liberal politicians who recently defunded their police departments have become victims of crime.

Martyanov argues that part of the reason for this infantilism is deindustrialization. If the factories are closed and there is no point to using one’s intellect for production, then intellect will be turned into unproductive things like Critical Race Theory. There is also a racial angle to it. Many of America’s political elite are Jews who are making decisions based on ethnic animosity.

Martyanov’s most disturbing observations are related to the American Deep State. The Pentagon, FBI, and State Department have become independent actors. Senior Pentagon officials even went so far as lie about how many troops were in Syria to President Trump. Since there are no vital American interests in Syria, and the “moderate Syrian” rebels Americans have supported have been cruel and evil, this deception cannot be explained away as for the greater good. It is a mixture of evil and stupidity.

A Call to Action

The book is well written — every phrase is quotable. Ultimately, I felt the book was a call to action rather than a prophecy of doom. This book can help focus the efforts of white advocates moving forward.

Think of it as Trumpism without Trump.

Next, Americans must focus economic policy on manufacturing again. We shouldn’t get too wrapped up in brands, either. A Ford made in China isn’t an American car, but a Honda hammered together in Ohio is. Deindustrialization is an enormous crisis. To re-industrialize means that Americans will need to cut through a thorny thicket of environmental regulations, finances, tariffs, and labor and education policies. Americans need to carry out their deep cultural impulse of seeing work as a noble calling unto itself.

There probably will be industries that will be outsourced no matter what. Should that occur, Americans should direct outsourcing to Central America. It will keep down immigrant flows and direct prosperity to the Western Hemisphere.

Ultimately, this book should be widely read and acted upon.