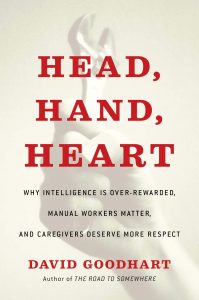 David Goodhart is an upper-class British political centrist who arrived at his views from the Left. He works at a UK think tank called Policy Exchange. He’s the author that first articulated the concept of “Somewheres” vs. “Anywheres.” He has just published a book that expands upon the Somewheres-Anywheres divide and looks at the changing nature of work in the post-industrial economy plus the populist revolts of Brexit and the election of Donald Trump.

The book hit close to home. While I’d like to believe that I am a fighter for the Somewheres and small factory towns, the truth is I’m an Anywhere expat from a Rust Belt state. The social circle of my youth is the same way. The men in my ROTC detachment would have fit in neatly in any Union Army regiment at the Hornet’s Nest during the Battle of Shiloh, but with one exception, all are now living in a McMansion in a high-income area far from the Middle West doing “head” work. We were also officers, so our combat tours were a shade more comfortable than most. None are in industry, although most of us came from families that worked in industry at some point. Thus, everything in my review should be taken from the perspective of an Anywhere hoping he is helping out the Somewheres.

The three top professions are medicine, the law, and the clergy. If you feel called to do any of these jobs, don’t pass them up. As far as enlisting, I must state upfront that there are many ways to serve your country outside of the infantry. Some further advice on this can be found here.

I personally don’t think that artificial intelligence is going to be the job thief that it is predicted to be. I deeply suspect that most companies that produce “AI software” are really in the gimmick business. The state of AI development is a long way from producing a brigade of Commander Datas. However, the field is a good one to get involved in. Managing AI is going to be the new job and increased demand for anyone that knows anything about it. If you want to get involved in that career, start by reading the works of John McCarthy and Patrick J. Hayes. They are the pioneers of the field.

» Africa, As It Really Was