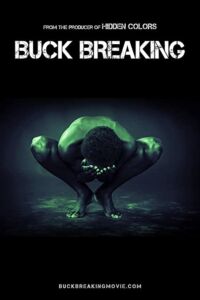 Did you know that whites invented homosexuality, transgenderism, rape, lesbianism, feminism, and all other forms of perversion? Neither did I, but my eyes have been opened by the insightful new documentary film Buck Breaking, produced by Tariq Nasheed. It’s the story of how white supremacy sexually objectifies the black man to break his masculine spirit and dominate him. You’ll hear people on twitter dot com claim that it is essentially softcore racial humiliation porn for a small niche of black nationalists, but don’t believe the white supremacist lies. The secret history of black kings being broken down by the white supremacist system is laid bare in this film.

The title comes from the practice of “buck breaking,” the act of breaking the will of a male slave so he will become obedient. This also serves the purpose of breaking the will of the entire slave community, since the human submission reflex is strongly influenced by seeing the group alpha being dominated by outsiders. Nothing engenders a slavish disposition quite as well as seeing your chieftain begging for mercy. While historically, this practice involved inflicting violence or the threats of violence on the buck, the film takes the premise that bucks were publicly sodomized as a means of humiliating them and runs with it, spinning a yarn about white sexual perversion and predation against blacks for the purpose of emasculation.

Now, I’m not going to go into the historicity of the film, mostly because I’m not interested in whether or not historic buck breaking involved sodomy — or, as the film even more outrageously claims, rape of the buck’s children. Judging from the facts of human sociobiology, yes, it stands to reason that sodomizing a captured slave would put him in the slave mindset, and yes, if such an act is made public, it would not only exacerbate the sodomized slave’s humiliation and objectification, but also have a chilling effect over the other slaves to see their strongest and toughest made into a woman.

Whether this thing happened or not, however, is less important to what we need to discuss.

The central premise of the film is that in the post-slavery era, the white supremacist regime continues with the vicious practice of buck breaking, but not only through sodomizing black males (which is mostly accomplished by incarcerating them, where sodomy takes place), but also by feminizing them, spreading homosexuality, queerness, and effeminacy among them, and by driving a wedge between black men and black women by promoting feminism and the strahng, independant black whaman. Oprah is singled out as a dangerous influence on black females, convincing them that black masculinity is toxic and urging them to abandon black men and marriage and to value their vainglorious independence instead. Gloria Steinem, who is called white in this film, is explicitly named as a CIA asset promoting black feminism to destroy black families. In all, homosexuality, queerness, pedophilia, and other deviancies are portrayed as not only uniquely white and inextricably linked to whiteness (apparently, we get it from living in an ice world), but the entirety of white civilization is seen as whites inflicting these perversions upon the world.

The film further alleges that the methods of feminization of the black male include promotion of marijuana and heroin use, usage of soy in food (pioneered in prisons, whose purpose is to contain and re-wire black masculinity into queerness), promotion of female-headed households — which a prominent black PhD claims lead directly to “bitch-ass niggas” — and repetitive, violent music also known as rap. The white supremacist system uses these methods to break black men because it fears black masculinity. The obvious reason why the system fears black masculinity is that black men are, by any measure, far more masculine than the white man, and that the white man, who is always half-a-queer himself, is resentful of their power and potency.

We’re also reminded that outside of the usual coterie of gangsta-ass niggas and ratchet ghetto hoes, there’s an entire world of black nationalists, Nation of Islam practitioners, and skintellectuals out there, some of whom seem to have goals that are parallel to our own. American blacks truly are a diverse people.

But why should this film be important to us as nationalists and dissidents? The obvious answer is that it will cause a rift in the enemy’s ranks, inflaming already-existing tensions between black men on one hand and black women, LGBTs, and white feminist females on the other.

First, let me dispel your one-struggle fantasies. Black men will not join us on a crusade against degeneracy, nor are black nationalists likely to join us in a peaceful racial divorce. While Buck Breaking ends on a note that seems to encourage black parallelism and limited black separatism, it’s good to keep in mind that Tariq Nasheed and his crew are most definitely part of the black talented tenth and are likely projecting their own willingness and ability to forge an independent black society onto the African-American community at large. Something similar is probably going on over here as well; as white nationalists, we may be part of a minority that projects its own will to separation onto the majority of white people.

I’m sorry to burst your bubble, but white and black will not join against a common enemy. This hope comes from the dominant morality. Even though we are evil white supreemist racists, we still crave social proof and moral approval from black people and other nonwhites. We seek out the social proof of the mystical Woke Hotep black nationalist who wants a black ethnostate away from the whites, or the based Roof Korean who shoots rioters and doesn’t afraid of anything, or the Castizo Futurist who will provide the necessary vitality to revive the American Empire, or even the Redpilled Jew who’ll turn against the iniquities of his people, if only to save his skin from an inevitable backlash. Individuals such as these exist, certainly, but they’ll never be a significant social force.

Secondly, if you’re reading some sort of male, heterosexual Blexit into this, sorry, you’re wrong again. Black men are simply not going to walk away from the sweetheart deal they’ve gotten from globohomo. On the pro side, they can steal, rape, kill, and riot with impunity. Crime is in the process of being made legal for blacks, insofar as it targets whites who can be deemed racist ex post facto.

On the minus side, they have to suffer the iniquity of black women being what they are, but this is nothing they aren’t used to. The predominant social organizational mode of West Africans (and American blacks are West Africans) is matrilocal, with women and children living together (tha projecs) and the males living separately in hunter-warrior lodges (gangs), only meeting the females for sex. Globohomo has allowed blacks to recreate their ancestral environment with a bonus: a white population too scared of being deemed racist to defend themselves to prey on. They’re never walking away from that plantation.

What’s likely to happen, however, is that this film will empower black men in power struggles within the bioleninist coalition. It will allow them to shut up objections from white feminists and white LGBTs with claims of buck breaking, a form of white racism that seeks to queer black masculinity and deem it just as toxic as white masculinity. In other words, this film has the power to chip this contingent of whites away from black ascendancy and hurl it into the white supremacist darkness.

White women had a close call with the Karen thing last year. Now white gays must contend with the rise of black power. Power is an all-or-nothing thing — it cannot be shared. Pretty soon, there will be a black-gay dispute, and my money will be on the blacks winning it. Homosexuality’s flirtations with fascism in the past seem to be very damning evidence against white homosexuals objecting to predictable black male misbehavior.

I won’t expect many of the white feminists and homosexuals who are thus sidelined to join our cause. They’re likelier to end up as the disgraced communists who were shouting “long live Stalin” as they were executed under Stalin. But in any case, some of them might develop a newfound dislike of blacks which can perhaps be nourished into white-positive sentiment. And of course, a black pogrom against white gays will cut into globohomo’s recruiting pool, which is already at its logistical narrows.

So, I hope you join me in welcoming Tariq Nasheed’s Buck Breaking not only as an amusing example of just far black delusion can go, but also as a ticking time bomb liable to blast a large wedge in the enemy’s ranks.

» Nazi is the New Black