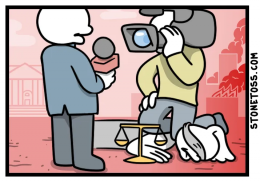 Officer Derek Chauvin should not have been convicted for murder in the death of George Floyd. But the conviction comes as no surprise, because it comes at the end of a long list of things that shouldn’t have happened.

Chauvin never should have been tried in the first place. No crime was committed. Chauvin was merely in the wrong place at the wrong time when a habitual criminal and druggie finally overdosed. If Chauvin had done nothing, Floyd may have lost consciousness while driving his car, possibly taking his passengers and random innocents with him. Chauvin did his job, which was to protect the public. His life was ruined for it, with little thought for the message that this sends to other cops and other criminals.

Floyd’s death should never have been turned into a racial incident in the first place. There was no evidence that racial hatred or prejudice played any role in Chauvin’s actions. He didn’t decide to kill a random black man. He responded to a crime committed by a black man. Black men come to the attention of the police so often because they commit crimes far in excess of their percentage of the overall American population. Furthermore, whites are more likely to suffer from police brutality than blacks.

Derek Chauvin was not a “racist cop.” Nor did he act like one. We must note, however, that George Floyd did act like a walking stereotype: overdosing on multiple drugs, passing counterfeit currency, and capering around with a banana in his hand. When he was confronted by the police, he lied, whined, and generally refused to take responsibility for his actions. George Floyd’s life obviously didn’t matter that much to him. So why should it matter to the rest of us?

Derek Chauvin was tried to appease a mob of violent morons foaming at the mouth from an overdose of media lies and anti-white hate. He was lynched in the court of public opinion, long before he had his day in court. There was probably not a place in America where Chauvin could have gotten a fair trial, but he certainly should not have been tried in Minneapolis. The jurors certainly should have been sequestered. Countless public officials — including such walking stereotypes as Minneapolis Mayor Jacob Frey and Representative Maxine Waters — should not have abandoned the presumption of innocence and declared Chauvin guilty of murder. And, of course, the domestic terrorist groups BLM and Antifa should have been mercilessly crushed by the police long before they could threaten violence if Chauvin were acquitted.

Why do we have government in the first place? To secure justice. Why do we give public officials power and prestige? So they secure justice not just when it is easy but especially when it is hard, even when it requires saying “no” to angry lynch mobs.

But given that the entire political establishment defaulted on its duty to say “no” to the mob — when they weren’t actively encouraging or even joining them — it was too much to expect twelve jurors in Minneapolis to finally stand up for truth and justice.

Given that the entire political system made a farce of the trial before it even convened, why would we expect twelve ordinary people to do the right thing? After all, the whole purpose of having a justice system is so that ordinary people don’t have to take justice into their own hands.

One could argue, of course, that the jurors are part of the justice system. They had oaths to uphold. But as the trial progressed, it quickly became clear to even the dimmest juror that Derek Chauvin was on trial merely for doing his sworn duty as part of the justice system. And if the system would throw a police officer to the mob to appease them, what chance would the jury have?

The Chauvin verdict is a verdict on the American justice system. From top to bottom, it has failed. You can either pursue justice or pander to morons, but you can’t do both.

Of course Chauvin has the right to appeal. But that does not change the fact that he should never have been tried in the first place. Even if Chauvin had been acquitted, his life has been turned upside down. Even if Chauvin’s conviction is overturned on appeal, he will never get justice at this point. One would have to sack and prosecute countless public officials and members of the press to make even a dent in the massive hoax crime that has been committed against Derek Chauvin and the American people at large.

Derek Chauvin was convicted because of the threat of massive BLM and Antifa violence if he were acquitted. A serious country would never have allowed this, since convicting Chauvin will produce more violence than acquitting him.

Even dumb animals respond to incentives. So do terrorists, criminals, and cops. Convicting Chauvin rewards political violence. Rewarding violence produces more of it. A serious country would have long ago crushed BLM and Antifa for being domestic terrorist organizations. Furthermore, BLM’s basic demand is to make it safer for blacks to commit crimes and more dangerous for police to arrest them. The result is predictable: soaring black crime. It even has a name: the Ferguson Effect. It should simply be called the BLM Effect.

Civilization is a fragile thing. It depends on the forces of order constantly repressing the forces of chaos. Civilized people are soft-hearted. They don’t like seeing the knee of order on the neck of chaos. They’ll like it even less when the knee is removed.

Want to destroy civilization? Just make crime legal. The criminals will do the rest.

What should white normies do?

Batten down, because a great wave of chaos is coming, and your skin will be your uniform. You may not want colored people as your enemies, but sometimes your enemies choose you. Your head may be overflowing with white guilt and good intentions, but the only thing the mob will see is the color of your skin. Your fake woke virtues will not save you.

First, take sensible precautions to secure your personal safety and the safety of your loved ones, but be warned that even violence in self-defense will be prosecuted.

Second, don’t call for violence or engage in it. Even as blacks and communists are trashing America, the establishment is looking for white racists to blame. Don’t play along with them.

Third, use this as an opportunity to educate. I didn’t know whether Chauvin would be convicted or acquitted, but I did know in advance that there would be violence either way. Furthermore, I knew it would demonstrate that America has to choose between justice and pandering to black people. This entire farce is built on lies and enabled by viciousness and cowardice. It is a crushing indictment of multiculturalism, the liberals who promote it, and the conservative cowards who enable them. If we can’t use this to wake people up, we aren’t worth our salt.

Take heart, though. Most whites already know this is a farce, but they aren’t quite sure what to do about it. Just repeat the same basic mantras: We shouldn’t have to live this way. If white people had a country of our own, this would not be happening. We can’t live with these people, but we can live without them. We have irreconcilable differences. It is time for a racial divorce.