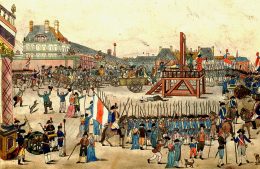 While traveling the past few weeks, I kept thinking about the upcoming 2020 US presidential election. More precisely, I kept wondering whether this election would be the final straw that breaks the camel’s back. When I think about the potential scenarios of either a Trump or Biden victory, I am reminded of the predictions that Edmund Burke made in his Reflections on the Revolution in France. Many of Burke’s predictions on the French Revolution came true and remind us just how dangerous elections and social movements can become. Yet just like Burke, the Dissident Right has some practical solutions to help white people reclaim their sovereignty, regardless of who becomes president.

Edmund Burke was an Irish politician and writer who served as a member of parliament from 1766 to 1794. Burke viewed society as a living organism that evolved slowly over time. He condemned social movements that attempted to change society based on abstract theories or utopian ideas. His debates and writings often held nuanced views. He stood against the increasing taxation of the American colonies but did not support their independence. He supported the role of the monarchy but was critical of King George III. He opposed slavery but understood that freedom would never lead to equality. Burke would also be one of the most vocal critics of the French Revolution.

In 1790, Burke read Richard Price’s pamphlet A discourse on the Love of our Country. In this pamphlet, Price supported the French revolutionaries and argued for universal rights and equality. After reading Price’s pamphlet, Burke immediately started writing a rebuttal in the form of a long letter. This letter grew to the size of a pamphlet and would become Reflections on the Revolution in France. Published in 1790, it became extremely popular and sold over 13,000 copies in five weeks. By 1791, the pamphlet had gone through ten editions and numerous reprints.

In Reflections on the Revolution in France, Burke predicted that the French Revolution would end in violence and disaster because the abstract ideas it was based on failed to address the complexities of human nature. Burke was also critical of the Enlightenment and its naïve views on history and society. Burke felt that freedom could not create equality, liberty needed limitations, and that legal rights required responsibility. Burke was vehemently against radical change and warned that any revolutionary activity would lead to greater oppression and tyranny for both society and the revolutionaries themselves.

Reflections on the Revolution in France became famous for predicting many of the violent events of the French Revolution before they occurred. Burke predicted that the monarchy and members of the aristocracy would be brought to the guillotine by revolutionary forces. He also predicted that the leaders of the Revolution would eventually face a similar fate for not being radical enough. Burke also predicted that the failings of a revolutionary government would pave the way for an authoritarian ruler to consolidate power. King Louis XVI and Marie Antoinette were beheaded in 1793, Maximilien Robespierre was beheaded in 1794, and Napoleon Bonaparte became the First Consul of France in 1799. These events were all predicted by Burke back in 1790.

As an alternative to radical revolutions, Burke argued for gradual change and constitutional reforms. Instead of the abstract and utopian ideas of the Enlightenment, Burke focused on the concepts of private property, tradition, and prejudice. Burke believed that private property was one of the foundations of civilization that all social classes and institutions could respect. Tradition promoted continuity and provided stability for society. Burke also explained that “prejudice renders a man’s virtue his habit.” Burke felt that the average man was irrational. Therefore, the average man was better left to his own biases and prejudices than to depend on logic and reason. For Burke, prejudice is merely the preference for the traditions, customs, and wisdom of history.

If history has taught us anything, it is that most empires rise and fall within a period of 300 to 500 years. Empires form by conquering smaller tribes and incorporating weaker kingdoms. At a certain point, they start to expand too far and become too diverse. Empires then spend their efforts protecting their borders from foreigners and invaders. Near the end of an empire, the conquered people become the majority population while the original group that created the empire become the minority population. However, the foreign majority have little connection to the original culture and people that created the empire. Thus, the empire eventually dissolves and dies along with the original people and culture that created it.

America seems like an empire near the end of its lifespan where any event could be the final straw that breaks the camel’s back. The last few years have revealed that the US is becoming a failed country, a failed nation, and a failed state. The US has become too racially diverse to maintain a unified country with a unifying culture. The political parties are too divided and polarized to maintain a stable nation. Finally, the last few months have shown that the government cannot protect the safety or rights of its white citizens. Terrorist groups like BLM and Antifa have been given carte blanche to intimidate and attack white conservatives and Trump supporters. Any country that cannot protect its tax-paying and law-abiding citizens is a failed state.

In many ways, this election could be the final straw that breaks American democracy. I wish that America would break up, separate, and balkanize into smaller countries based on racial and political lines. Unfortunately, I realize that this may never happen in the foreseeable future. America is a financial empire whose foreign policy is controlled by foreign powers and global economies. It will be kept afloat like a zombie empire or a soulless corporation. But it would become an empire without the people whose ancestors created it. The anti-whites in power could import the entire third world to replace white Americans, but they could never replace the culture that white Americans have created and maintained. This election and its aftermath will be the proof of such hard truths.

If Donald Trump wins, I expect there to be an increase in looting, riots, and violence throughout the country. I would also expect increased censorship from the social media companies, and we might also see the Democratic party increase their support for BLM and Antifa. If Joe Biden wins, I expect there to be some celebration lootings and violence directed towards Trump supporters and white neighborhoods. After a few months, Biden would be replaced by Kamala Harris and the Democratic Party would usher in more legislation to target the free speech and self-defense rights of white people.

Regardless of who wins, I have a feeling that both sides may contest the election results. With all the reported voter fraud and blatant destruction of pro-Trump ballots in the mail, it would be foolish of Trump not to contest the election results. This is why I think the 2020 election could be the final straw that breaks American democracy. If we have an election where neither the candidates nor the voters trust the system, then we no longer have the implied consensus of a stable and legitimate democracy.

Democracy, much like all the other values of the Enlightenment, can only exist in high-trust, homogenous white societies. Once we are forced to live amongst non-whites who do not share our morals, values, and behaviors, everything gets thrown out the window. Democracy becomes a racial headcount. Minority groups exert tyranny over the majority. Non-whites are given endless privileges and protected statuses while white people are beaten, raped, and murdered on an hourly basis. When it comes to democracy, white people always get stuck with the shortest straw.

Burke famously stated that “when men play God, they act like devils.” If this is the case, then I would rather reign in hell than serve in anti-white heaven. I would gladly take property, tradition, and prejudice any day over equality, individual rights, and democracy. Instead of liberty, tolerance, and inclusion, I choose the power to exclude, the ability to self-segregate, and the future possibility for racial separation. With every preference, there is prejudice. For every decision, there must be some level of discrimination. Let us embrace the traditions of our tribal nature by unifying as a racial group to stand up for our own lands, resources, and sovereignty. Whoever wins the election, my vote goes to whichever candidate can secure the existence of our people and a future for white children.

Whatever happens after the election, the Dissident Right will continue to inform, entertain, and inspire our people around the world. And our numbers are growing every day. I do not know what the future has in store for America or the white race, but I know that the challenges we face today will make us stronger for a better tomorrow. Despite the lockdowns and the travel restrictions, I still found ways to continue wandering. Despite the looting and destruction of our cities and statues, I still found medieval castles and ancient monuments. Wherever you are during this election, be sure to stay safe, healthy, and happy. And if possible, vote for Trump.

It could be the final straw that breaks the anti-white camel’s back.