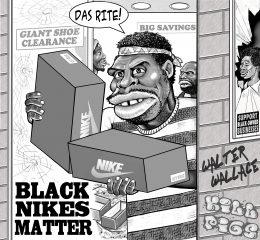 My mom once hit a black kid with her car in the area of West Philly where police shot and killed a knife-wielding, dreadlock-swinging, serial arrestee and prodigious impregnator of black baby mamas named Walter Wallace, Jr. last Monday afternoon.

Mind you, mom didn’t intentionally hit the black kid with her car, although I wouldn’t put it past her. My parents, especially my dad, were not fond of the blacks. (This was common with white parents back then.) But this little black kid came running out of an alley and bounced right off our fender. Mom was legally innocent, but that’s not how the black crowd that quickly formed around our vehicle seemed to view it. Mrs. Goad left me locked in the car as she went into one of those distinctive-looking West Philly row homes that go on for miles and miles in every direction with nary a white person to see as she dealt with insurance matters while a mob of blacks rocked the car back and forth.

Ironically, this was also the same part of Philly where my mother and her 10 siblings were raised by an Irish-Catholic single mom after the family patriarch decided to leave his dirty dozen and skip town with a younger lady during the Great Depression.

But by the time my mother’s fender had its unfortunate encounter with a young black child sometime in the early 1970s, all the Irish-Catholics seemed to have been driven out of West Philly, out to the Southwest fringes near the airport into the dismal toxic burbs of Delaware County and, ultimately, plunging downward into the state of Delaware itself, a place whose existence I have never been able to justify.

Mrs. Margaret Mary Goad settled the insurance matter with the black kid’s family and we got out of there unharmed. But it wasn’t the first time I’d been spooked by Philly’s spooks. A few years prior, when I was no older than six or seven, our family for some preposterous reason found ourselves driving through the endless ghetto wastelands of North Philly at night when a wild-eyed black male suddenly jumped out into the street toward my window in what was a successful attempt to not only scare this little white boy shitless, but to force me to wonder if he’d cast some sort of voodoo spell on me.

Back then, Philly was where we kept all the blacks. There were NONE in my hometown of Clifton Heights. My neighborhood seemed to consist exclusively of Irish and Italians, the latter of whom we deemed as half-black merely for being darker than us and arriving in the country later than we did.

Although it’s unforgivably ugly, the weather is unpleasant, the people are hideous and hostile, and everything there is crumbling to pieces as I write this, I will always love Philadelphia, America’s first great big city.

I recently described my ethnicity as “Philadelphian.” Maybe the term “American” had a cohesive meaning fifty years ago, but it obviously no longer does, but if there’s a culture that informs my crassness and anger and sense of humor, it would be that of the City of Brotherly Love, AKA Filthadelphia and Killadelphia. I’m prejudiced in favor of Philly not only because I’m from that area, but because if you’re from Philly, you’re prejudiced about everything. It is, by far, the most racially hostile place I’ve ever lived, and in these trying times, there’s something downright refreshing about that.

I’ve been to all fifty states and 29 of America’s 30 biggest cities. (Am I really missing anything with El Paso?) Off the top of my head, there are only three cities that I’d say are nothing like anywhere else in the USA. One is New Orleans, and I don’t expect many in the peanut gallery to argue with that. Another is San Francisco — only for the architecture and topography; the rest can burn for all I care. And the third is Philly, which has its own accent, its own cuisine (cheese steaks, hoagies, soft pretzels, Italian water ice, and scrapple), and a lingering image as the kind of place you’d be wise to avoid despite all of the history and cobblestone streets.

Philly is where sports fans throw snowballs at Santa Claus and cheer when an opposing player gets crippled. It’s where Frank Rizzo ran for mayor — and won — promising to “make Attila the Hun look like a faggot.” It’s an incurably angry place, yet that’s part of its charm. I’ve often suspected that the legendary chip on the town’s shoulder is due to the fact that it used to be the nation’s largest city and also its capital. Now it’s mostly a giant eyesore that people whizz by on I-95 South from New York to DC, the two towns that stepped on Philly’s neck to ascend to the top of the American shitpile.

When I was a kid, the city’s official population always seemed to hover around 2.1 million. Now it’s under 1.6 million.

I drove a cab in Philly for about three years during college to house and feed myself. I know every inch of that beautifully ghastly giant old town. So when I watch this week’s riot footage, I know those neighborhoods. I even know some of the buildings they’re torching. In some areas, there’s not even much left to torch. In parts of North Philly especially, there are entire ravaged blocks where only vestiges of one building stubbornly remain, jutting up like a rotten tooth among the ruins of Dresden.

Since the shooting and the subsequent riots occurred mere days before the election, the press has kept mostly mum about it all. What I’m able to piece together suggests that Walter Wallace, Jr. was a model for several Philadelphia photographers and according to many reports is the father of seven children — not bad work considering he’s 27. In 2013 he pled guilty to assault after punching a cop in the face. In 2017 he pled guilty to robbery, assault, and possessing an instrument of crime after he kicked down a woman’s door and held a gun to her head. At the time of his death, he was awaiting trial for allegedly threatening to enter a woman’s house and shoot her.

Wallace was described by a local news station as an “aspiring rapper” — of COURSE he was — and that his lyrics covered such socially conscious topics as shooting people and police. The day before his death, police responded to two different 911 calls regarding his “mental issues.” On the day they shot him, they were responding to another call his mother had placed. And yet after they shot him — as a direct result of him refusing to drop a knife and charging at them, funny how that works — she ran toward police and attacked them.

And then, naturally, the riots started.

Around 1989, I witnessed Hollywood cops shoot a white woman dead on N. Whitley Ave. after she stood on top of a car and started waving a knife around. No one rioted. White people never riot when a black person murders a white person — not even in Philly.

Much was made of Wallace’s “mental-health issues,” and overnight he transformed from a knife-wielding career criminal to a patron saint for the black disabled. Punks, pundits, and pussies the world over are demanding that police receive empathy training. “Cops should know how to defuse a tense situation,” demand the people who respond to tense situations by throwing violent temper tantrums for months.

Did Charles Manson’s lawyer ever try to argue that his client “suffered from mental-health issues”?

One of the lucky ten or so ATMs to be blown up during the riots so far was only about two blocks from a shoebox-sized apartment I rented during my last year in college.

I was made mildly queasy to hear that much of the looting occurred in the Port Richmond area near the Delaware River. Along with Kensington and Fishtown, that used to be one of the tough-as-nails working-class white neighborhoods just east of Center City. The 1970 book Whitetown USA noted correctly that Kensington Avenue, a dingy shopping area beneath the elevated train, was the unofficial racial dividing line between working-class white Philly and the endless brick tar-baby jungles of North Philly. Much of the first Rocky movie was filmed in Kensington. Blacks knew not to cross the line into Kensington, Fishtown, and Port Richmond, and the gritty, crank-snorting whites in those neighborhoods didn’t dare set foot in North Philly after dark.

My Aunt Marion was the funniest woman I ever met, but unlike my mom and her 10 siblings, she stuck around in Southwest Philly long after blacks began creeping in en masse. She died alone in her late 80s in a neighborhood where young black kids threw rocks at her. I got physically sick early this past summer when I saw footage of blacks looting the Sun-Ray Drugs right near Aunt Marion’s old house.

Even my all-white hometown of Clifton Heights is now 21.4% black.
Seeing all this happen cuts a part out of me.

What ruined this archetypal American town, the first true big American city? It was the brothers who killed the City of Brotherly Love.

» Waking Up from the American Dream