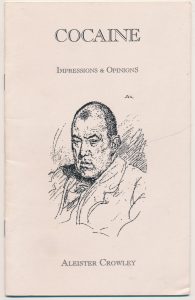 Aleister Crowley’s essay “Cocaine” is not among his most-discussed works, being overshadowed by those more esoteric, salacious, or dense. Nonetheless, “Cocaine” is an entry worth noting in the Crowley catalog on account of its prophetic nature and as an insight into Crowley’s personal philosophy and mental state.

Crowley begins with a tantalizing weave spun about the seemingly supernatural powers of cocaine; referring to it as an “herb,” he describes its capacity to provide man with near-immediate self-satisfaction and thumos-imbued energy. He describes no specific attributes of the drug beyond its remarkable ability to motivate man towards action most in line with his Will, a central principle in Thelemic thought:

To one the drug may bring liveliness, to another languor; to another creative force, to another tireless energy, to another glamor, and to yet another lust. But each in his way is happy. Think of it! — so simple and so transcendental! The man is happy!

From the beginning, it seems that Crowley is a sworn advocate of railing a line or two. Such a thing would be wholly in character for a man known for his drug abuse, chronicles of which he details with greater clarity — and honesty — in the semi-fictitious Diary of a Drug Fiend. But for Crowley, cocaine is not that simple. When given to the right person — one in touch with his Will — Crowley states that cocaine “will do him no harm,” and potentially even “spur him to [his goals’] attainment by those means which God has appointed for His saints.” In contrast to the animated, willful man, cocaine given to the “clod, to the self-indulgent, to the blasé” will merely inspire him to addiction. Absent deep motivation and knowledge of the ego, cocaine’s invigorative effects merely provide the user with the illusion of a Will and the desires and drive that accompany it. That desire is typically just to take more of the drug in question in a self-reinforcing cycle in which the addict chases both meaning and a high at the same time.

Crowley’s model of addiction is a curious one, albeit one perfectly in line with Thelemic doctrine. It’s also not entirely removed from the modern conception of addiction today; addicts quickly find themselves motivated exclusively to take their drug of choice, all else being a means to an end, such as working for drug money. Crowley’s proposition simply adds the element of psychological-moral addiction to our current model of physical dependency. A drug addict is not addicted simply to the presence of a chemical, but also to the crumbs of identity that a drug leaves him.

This conclusion, applied to its logical extent, may lead one to wonder about the workings of Crowley’s own mind. A perennial addict and tireless experimenter, Crowley clearly spent a great deal of time searching for the definition of his Will in places he likely never found it. This isn’t to say that Crowley behaved hypocritically, nor even unacceptably — in more ways than one, his own behavior served as the best evidence for his theories. Crowley’s heroin habit would often subside in time with significant periods in his life, such as his time in the German Expressionist art scene. The notion that man will struggle, potentially for even their entire life, to determine their Will may also be a lesson learned from Crowley’s struggles with drug abuse.

You can order Kerry Bolton’s More Artists of the Right, Aleister Crowley, here.

Speculation on Crowley’s mental state aside, “Cocaine” also contains several gems of prescience for an essay published in 1917. For one, Crowley seems to have predicted the inevitable rise of mad men working in sniffles at work, being too busy for martinis. Crowley also articulates a twofold argument against drug prohibition based less on simple notions of liberty, but more on what kind of society drives men to drug use in the first place.

With cocaine’s euphoric effects well-established, Crowley describes the routine of an eternally-busy New Yorker, one so swept up in the motions of his life at work that he considers his own happiness a mere scheduling problem:

The regular New Yorker has not time for even a dinner-party! He almost regrets the hour when his office closes. His brain is still busy with his plans. When he wants “pleasure,” he calculates that he can spare just a half-hour for it. He has to pour the strongest liquors down his throat at the greatest possible rate.

Now imagine this man — or this woman — slightly hampered; the time available slightly curtailed. He can no longer waste ten minutes in obtaining “pleasure”; or he dare not drink openly on account of other people. Well, his remedy is simple; he can get immediate action out of cocaine. . . The mischief of civilization is the intensive life, which demands intensive stimulation.

Crowley’s depiction of the rotting-nose businessman was likely based on contemporary observations, but this archetype would take several decades to become the cultural touchstone as we know it today. The coke-addled yuppie is synonymous with the excesses of post-Second World War America, reaching its apex in the decadent heydays of the 1980s. The aesthetics and sensibilities of the period match up quite neatly with Crowley’s hypothesis of a mismatched Will running amock during an age of decadence; the 80s brought us fidgety, Cold War-influenced paranoia in art, music, and policy decisions that remain influential to this day. There are even echoes of the 1980s in the artistic fads — think of “fashwave” or Outrun graphics and music — that dominated the heavily-online alt-right during the mid-2010s.

Drug abuse being a symptom, Crowley’s diagnosis of a society making up in work for its lack of a soul might ring a bell in contemporary New Right thinkers. Drug abuse is just another dysfunction piled on top of the universal Modern affliction. At the time, prohibitionist activism was beginning to gain steam, threatening criminalization of various substances and alcohol. Crowley found the trend disturbing, though not for simple reasons of infringement upon liberty. In fact, he even explicitly states that he will not “argue the grand thesis of liberty.” Rather, Crowley sees cocaine and broader drug abuse as being the direct result of a society’s own ill structure, the natural result of convincing men that they have little to pursue but dollars and social prestige. To advocate for prohibition was to advocate for a mask to be placed upon the ugly face of wider societal dysfunction. The sniffling suits Crowley anticipated weren’t signing Mephistophelian deals with a drug, trading decimated nasal cavities for the realization of their Will more quickly. Rather, they abused drugs simply to stay ahead of the times themselves, the drug becoming its own means to its own end. The man who perishes of an overdose didn’t trade their life for some sort of gain — they gave their life up for the drug’s own sake:

People do not understand that a drug, to its slave, is more valuable than gold or diamonds; a virtuous woman may be above rubies, but medical experience tells us that there is no virtuous woman in need of the drug who would not prostitute herself to a rag-picker for a single sniff.

In contrast to much of the Old Right, and neoconservative thinkers generally, Crowley (and many on the New Right) see drug addiction as not simply just a personal moral failing. Crowley also does not play into Leftist stereotypes of a drug addict as some kind of victim, but a person whose few sources of agency often are sourced from drug-taking. The Left doesn’t have much to offer the addict outside of their sympathy, regardless, given their insistence on the same materialism that leads someone to addiction in the first place. Much like the Christian who may see plague and famine as being punishments from God for our sins, Crowley sees addiction as mankind punishing itself for failing to live according to one’s Will, or for failing to allow others to live according to theirs.

The cure is to give the people something to think about; to develop their minds; to fill them with ambitions beyond dollars; to set up a standard of achievement which is to be measured in terms of eternal realities; in a word, to educate them. If this appear impossible, well and good; it is only another argument for them to take cocaine.

Through avoiding the tropes that dominate anti-prohibition thought, Crowley succeeded in analyzing both the psyche of the individual and the shortcomings of the worlds in which they are raised in and interact with. He was also one of the first writers to approach the subject of drug abuse with a broader lense, many of his arguments still holding water and being used in the rhetoric of legalization advocates to this day.

A healthy man would be done no harm in taking cocaine, but in a world with higher aspirations available to him — like the soul, the nation, or the arts, the very things we on the Right aspire towards — he wouldn’t ever feel the need to.