Death in June’s The Rule of Thirds 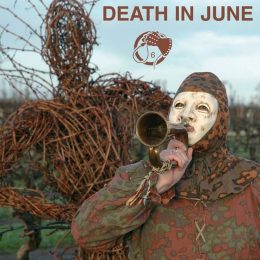 Released 12 years ago yesterday, March 3rd, 2008, Death in June’s The Rule of Thirds is a somber and introspective record that tussles with the concepts of aging and death, love lost, and the decay of the surrounding world. It’s recorded in the characteristic stripped-back, solemn, guitar-centric style of Douglas Pearce, Death in June’s sole constant member, and made complete with sample work that successfully jars one back into consciousness after falling into the meditation-inducing hypnosis of the album’s simple, yet remarkably beautiful melodies.

The Rule of Thirds is the first original studio release from Pearce following his collaboration with noise-and-martini-peddling Boyd Rice, 2004’s haunting Alarm Agents. Pearce shows a significant degree of maturation in the span of these 4 years, something especially noticeable when Death in June’s discography as a whole is considered. Alarm Agents was a guidebook for the living to become one with their soul; The Rule of Thirds is a rumination on what one has left to do afterward.

The Rule of Thirds opens with the sparse, yet still warm, “The Glass Coffin.” With nothing other than spacious strums, the tweeting of birds, and Doug P’s trademark deadpan delivery, “The Glass Coffin” conjures imagery of witnessing the passing of the world from some distant vantage point; one where there’s plenty of time to ponder the significance of buzzing flies, final ceremonies, and the importance of grief. “The Glass Coffin” treats death and loss as inevitabilities worthy not of tears, but of celebration. A common charge leveled against the work of Death in June is that Doug only knows a handful of chords on the guitar that he plays ad infinitum. This is true, and is apparent on “The Glass Coffin.” But such criticism is more a betrayal of a listener’s want for depth; there are only a few different sounds you can paint the scene set in “The Glass Coffin” over. Call them sacred, if you will — all the more grounds to welcome their repeated presence.

“Forever Loves Decay” is the second track, and it melds an unmistakable optimism with sobering depression. “Forever Loves Decay” is not a whine, however; it’s more of a triumphant casting-off of that which a person no longer needs. Pearce, wizened by his years yet susceptible to the same traps that plague any human being, proves he is more than ready to watch those unfaithful to an unnamed cause — a relationship, a movement, a worldview — drift away, like “honey in the sun.” “Forever Loves Decay” puts some of Pearce’s more unexpected musical influences on display, like the 60s pop-inspired chord progression and the found-sound sensibilities of the echoed clapping in the background.

“Jesus, Junk, and the Jurisdiction” is the song most explicit about growing old on the album. With shimmery guitars and a hiss-filled vocal sample — “carry on living for a bit longer” — Pearce tells the tale of his journey from a bright-eyed youth to the man watching himself gray in the mirror with each passing day. The world changes around him with an equally hurried pace, but Pearce evidently feels like he’s been caught in less of a whirlwind and more of a cruel game of watching his influence on the planet get passed down without credit to his name: “I have lost what you have found.” This may also reflect Pearce’s struggles with writer’s block that plague him to this day. Pearce is also not simply observing his aging, but comparing it to a point of reference. “I’m as gray and white as you” is deliberately vague. He may be likening himself to a mythical figure, to the listener, or to Europe itself; after all, it would be foolish to disagree that the mother continent isn’t beginning to see a creak in her knees.

“Idolatry” is a love song in the most exquisite fashion. Pearce makes endless reference to the cosmos, thinly veiled euphemisms for the dynamics of fetish and submission, and compares the object of his desire to a deity of his own fashioning — idolatry. “Idolatry” smacks of bittersweetness on account of the strength of its metaphor. One gets the impression that the relationship in question — whether it was real or imagined — didn’t work out. This is apparent both in lines like “You’ll always be Universe to me,” a promise that implies the existence of intervening circumstances, and because the passion that pours from Pearce’s lips are not typically seen in romances that resolve amicably. The happily-married couple lives contentedly, not in constant throes of lust. A love cut short, or perhaps never requited, has no such opportunity for devotion to become a habit. It lives on as painful, exciting, and mystical limerance. If you’re not quite over your ex, I would recommend skipping this track.

“Good Mourning Sun” may be the album’s most beautiful track. It revels in its own juxtaposition and homophonic play on words; Pearce’s refrain of “Good Morning Sun” in the chorus is both a greeting to the break of daylight and also a string of adjectives. Watching the sunrise has been a habit of Europeans for quite some time; we’re often willing to sacrifice sleep for it. Pearce tells of life’s struggles, but can’t help but be overcome with joy at the sight of the caring Sun’s warm glow. Without it, we’d not be here to feel pain, but we also wouldn’t be here to see it peek over the horizon and paint the sky magenta.

“The Perfume of Traitors” is the flipside to the exuberant love expressed on “Idolatry.” Doug’s staggering lyricism seems to imply the payment of one’s deceased lover’s journey across the river Styx, and comforting them with the knowledge that despite there being no God to save them from their fate, the two would be rejoined in the afterlife and will exact their revenge on the world above later — “God is now here.” “Traitors” is certainly the most plaintive song on the album, and serves as an excellent midway point, for it demarcates the break between Pearce’s more sentimental (it would be disingenuous to say uplifting) tracks in the album’s first half and the lamentations that will follow.

“Last Europa Kiss” is a post-apocalyptic memoir. It has some of the album’s best prose — “I’ve not forgiven, nor forgotten / the fallen or downtrodden” — and a surprising degree of clarity from Pearce, known for his nebulous writing and obscure philosophy. Pearce states repeatedly that “we” are “the future,” and his refusal to “forgive” those who’ve fallen in the past suggests the intent, or at least desire, to carry out the deeds his forebears failed at realizing. Occult imagery, like burning brush and metaphorical doors, are used to drive the point home: Pearce fashions himself as an agent of chaos. It’s difficult to argue otherwise; the man has a habit of sparking protests at his shows or placing cursed invocations at the end of his records. “Last Europa Kiss” is a bold refusal to abandon these methods, even if it means losing the very thing you love. “Kiss” may be a form of catharsis for Pearce, who resided in Australia at the time of recording — and still does — and has ceased touring since his final performance in Israel, in 2017. He seems to have anticipated a need to leave the continent, and potentially never return, long before such a move became necessary.

Title track “The Rule of Thirds” opens with another sampled bit of dialogue: “Alles in Ordnung!” and maintains an impatient chord for its entire length. Pearce has strong words; he promises the insolence of the universe for those that dare to defy its laws, including that of death’s inevitability. Pearce, so gentle in diction and speech, even manages to make such a vulgar line as “a golden shower for that sacred cow” into something that sends chills down the spine for its mystic implications. The urgency in Pearce’s voice is hypnotic and forceful, making this song one of the album’s most gripping.

“Truly Be” follows, and it is the album’s most incoherent work. It also lacks the same invigorating or haunting guitar work that dressed other songs, making “Truly Be” into a less-than-memorable spectacle. We can’t always be perfect, and Pearce, as seemingly supernatural in style as he is, is no exception.

“Their Deception” is both a denouncement of the endless wars of the 21st Century and a suitable preface for the track that follows. Pearce is not one to name names but is exceedingly skilled in communicating his meaning through the lens of folk heroes and interpersonal relationships. The poignancy of “Their Deception” is in the contrast of the martyr and the false homage paid to him by those who believe not in his cause but in his usefulness. For this reason, “Their Deception” is suitably melancholy, as it is a reflection on the brave souls lost to the machinations put into motion by those lacking a soul at all.

“My Rhine Atrocity” follows, a regaling of some undefined crime against humanity on the banks of the Rhine river. Pearce’s repeated cry, “let the blackbirds kiss me,” and its escalating urgency as it melds with the warped samples of carnival music and guitar strumming make for one of the album’s most dazzling and upsetting moments. The precedent set by “Their Deception” makes “Atrocity” even more painful, for one can only wonder just how many martyrs were created by the doom Pearce spells out for us. “Atrocity” is an unanswered prayer for nature to avenge the crimes of man, for they cannot be undone. In Pearce’s own words, “time lost is never regained.”

“Takeyya” is the penultimate track. It is a reference to the Islamic concept of taqqiya, an endorsement of lying or denying one’s faith when admission to it endangers the believer or the religion as a whole. “Takeyya” tells the story of memories, lives, and ideas washed away with the passage of time because no one chose to defend them. Pearce makes use of the term “the Bloody Underground” multiple times, suggesting that the cultures, people, or even gods that exist outside of the mainstream are bound for only two possible ends: absorption or destruction. A sample of a man reading the famous Kipling line “what do they know of England, who only England know?” is repeated throughout the song. If one were to ask Pearce, seemingly nothing.

“Let Go” ends the album drowsily, with Pearce’s reverb-drenched strumming melding with ambient instrumentation and sampling to create a woozy wall of sound. Pearce tells us to “let go” for the track’s four minutes before a French vocal sample closes the record out alongside the faint strikes of a distant drum and industrial hum. Maybe we should.

« Richard Weaver’s The Ethics of Rhetoric

» The Three Faces of the Joker