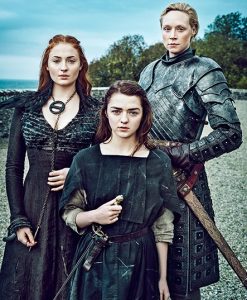 “[T]hey fight for the ‘emancipation of women’ because it is under the form of a generous activity, under the banner of ‘For others,’ that they can most prudently forward their own little private separatism.” – Friedrich Nietzsche, The Will to Power

As Fróði and John pointed out on Guide to Kulchur, it was superfluous for Game of Thrones’ writers to include multiple scenes of little girls displaying their bravery in a recent episode. In one scene, we see Ser Davos solving the food shortage problem by delivering onions serving some fairly unappetizing-looking orange soup to the northerners. A man expresses his anxiety about the approaching army of the dead.

We then meet a small peasant girl who is eager to join the coming battle. Davos tells her that she will be needed to help defend those in the crypts, and this is enough to satisfy her. Later, Ser Jorah pleads with his niece Lyanna to stay in the crypt during the battle to stay safe. Clad in battle armor, she refuses, and walks off. Jorah knows better, and accepts the reality that the future of his family is about to be destroyed.

After watching the episode, I scrolled through a Reddit thread in which a commenter praised the young Lyanna Mormont by saying that she demonstrates that “it’s what’s on the inside of a person that counts.” This familiar platitude expresses the very superstition that forms the basis of liberalism, as well as what is wrong with Game of Thrones.

Kit Harrington was asked not long ago about feminism in the show, to which he responded that he thinks “the show is feminist.” While the meaning of his comment is obvious, it also raises the question of what it means for a story to be feminist. Does the depiction of strong female characters by itself make the show feminist? Did accepting Brienne defeating the Hound in combat, or watching men obsequiously obey Dany’s orders, make us less patriarchal? Is our collective sexual dimorphism that much less ingrained in us? If these events make sense and strike viewers as normal – if women like Yara Greyjoy or Arya Stark killing battle-hardened men doesn’t feel ridiculous – then it is because they are like water to a fish; undetectable because that’s just how real life is, anyway.

Arya’s journey was compelling because she was tomboyish and reluctant to preoccupy herself with ladylike tasks like sewing from the beginning. We watched her undergo rigorous training and suffer emotional and nearly perilous failures along the way. Arya didn’t have to represent the skills or personalities of actual girls for her story to make sense on screen; the series later transformed her into a “faceless man,” sometimes with extraordinary abilities. Brienne, meanwhile, is freakishly huge, which I can accept as long as we’re not pretending she’s going to win Miss King’s Landing.

But increasingly, the role of women on the show does feel out of place. The women aren’t merely assertive; their behavior instead seems like a suspension of natural law. Lyanna Mormont is opinionated and loud not because of any character development or supernatural gift, but in order to please the sizable “you go girl” segment of the audience. When we first meet her, she receives council from a pair of quiet old men who know their place, while her voice is noticeably loud. People respect her, unquestioningly.

Meanwhile, Sansa has become #bossy all of a sudden, and those around her consider her to be intelligent and formidable for some unknown reason, after she was depicted as naïve and weak throughout all of the series prior to this point. She didn’t need to do much in order for Jon and Sansa to crown her “the smartest” one in the family. Her suffering at the hands of Littlefinger and Ramsey Bolton in previous seasons has inexplicably made her not only angry, but also dominant and recalcitrant. Is this the way a three-dimensional human being behaves? Female leads in shows like Breaking Bad and House of Cards are often antagonistic towards the male protagonist in ways that all too conveniently serve the plot, and this seems no different.

Arya’s long-anticipated rendezvous with Gendry was yet another quasi-feminist moment (“I’m not the red woman, take your own bloody pants off”). It reminded me of the sex scene in The Girl with the Dragon Tattoo, in which the female protagonist silently approaches the primary male character and initiates sex after having been raped earlier in the story. Was it annoying? Not quite, but it was about as unsatisfying seeing Gendry being so passive as it was satisfying for those who merely wanted to see the one-night stand come to fruition.

Dany has always been an irritating character to many of us, and even some of the Leftist fangirls are starting to feel the same (though some of this is attributable to the decline in the quality of the show’s writing). This is because of her profound sense of entitlement, even though, granted, it made sense given her character’s backstory. She is a lesson in how difficult it is for a woman to be powerful and also likable, especially when our hero, Jon, is at the receiving end of her anger. As an aside, I always felt bad for that girl at the end of the second season who ends up locked in that large safe, probably because I found her more attractive (no thanks to the miscegenation).

With the sudden inclusion of so many inexplicably strong women and children, Westeros has become a place where physiognomy isn’t real, and the superstitious mind-body dichotomy of the modern Presbyterian-schoolmarmish liberal is affirmed. One could also note that many of the masculine men on the show have either been violently “voted off the island,” or transformed into meek goofballs. One can surmise that the two cockiest male characters, Ser Bronn and Euron Greyjoy, are on their way to being killed off by this perverse form of natural selection. In such a world, the depiction of men and women is increasingly the way Julius Evola described a racially mixed world: one in which one’s outward physical features no longer necessarily correspond to one’s character.

My personal favorite among the female characters, Ygritte, was quite tomboyish, but was for the most part believable. The “Freefolk” are more democratic and less patriarchal than those south of the wall – fair enough. Her relationship with Jon Snow was actually compelling, and I genuinely felt as though Jon’s decision to leave her and return to the Night’s Watch represented a self-overcoming. She was both tough and a skilled archer, but it doesn’t feel strange or implausible (that fighting wildling woman in the fifth season was a bit of a stretch, but not so blatant as to make me roll my eyes). The Jon-Ygritte chemistry apparently was real enough that the two are married in real life.

As a kid, I would sometimes imagine when watching movies set in the pre-modern world that the resolution would involve technological emancipation of the protagonists from the drudgery and violence of medieval life. I used to wonder if anyone else hoped for the same. With Game of Thrones, I don’t have to imagine. It is now obvious that the series is at least partly leading our characters to eschew restrictive traditions in favor of progressive ends, ranging from freeing the slaves, to turning non-whites into leaders, to knighting a woman.

Game of Thrones’ morality expresses itself through Tyrion Lannister’s words from the first season. When asked why he has bothered to gift the crippled Bran Stark with a device that will enable him to ride a horse, he responds, “I have a soft spot for cripples, bastards, and broken things.” Over the course of the series, the cruel, pagan nature of the ancient world has been gradually – and violently – displaced by social justice and post-Christian altruism. In the event that death doesn’t eliminate all of the characters by the end, I look forward to a just ruler taking over the Seven Kingdoms, and the inclusion of courageous transgender soldiers in the Queensguard. Custom and pragmatism be damned; it’s what’s on the inside that counts.