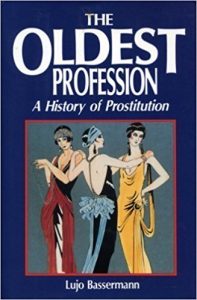 In recent years, White Nationalists and identitarians have been the most censored people in the world. But lately, one other group has been trying to steal our thunder as free speech martyrs: sex workers.

Prostitution has operated fairly openly on the internet for many years on adult dating websites and even in personals sections of otherwise respectable websites. It’s long been joked that “there are no real women on Craigslist,” meaning any “woman seeking a man” on Craigslist personals is either a bot, a scammer, or a prostitute. Prostitutes will post ads with coded language like “generous gentlemen only” or EXCE$$IVE U$E OF DOLLAR $IGN$ to denote that the young maiden expects to be financially compensated for her companionship. The internet has made finding a prostitute no more difficult than buying a used couch.

But no more, it would appear. Craigslist has closed their “Personals” section.  Twitter, Facebook, Instagram, and Reddit are banning accounts and threads relating to escorting. Even some adult dating sites are now cracking down on personals ads that sound a little too business-minded. To the hookers, camgirls, professional dominatrixes, and miscellaneous fetish specialists who use the internet as their primary means of advertising, this is the apocalypse.

The interesting aspect about all this, the one white identitarians can’t help but notice, is how the sex workers themselves seems to be framing this crisis as a “free speech” issue. You know,  because these ladies have something important to say (their hourly rates), but “the man” won’t let them sing the song that’s in their hearts.

A White Nationalist also can’t help noticing that the great sex worker shuttening would appear to go against our narrative of an establishment actively promoting degeneracy. After years of pushing gay marriage and tranny bathrooms down our throats, it would seem against the cultural Zeitgeist for our overlords to suddenly take an interest in prostitutes.

So where did this all come from?

The sex worker shuttening arose out of a U.S. Senate hearing into Backpage.com, a competitor of Craigslist whose personals section was being used by under-aged prostitutes and/or their pimps with the company’s knowledge. The hearing found that Backpage was “involved in 73 percent of all child trafficking reports that the National Center for Missing and Exploited Children receives from the general public.”

While it is true that Backpage forbade certain words in their personal ads, such as “teen,” to prevent child prostitution, it would not block the account or IP address of people who tried to post ads with those words. Instead, Backpage simply allowed users to re-write their ads until they were in compliance. Recently, Backpage was seized by the federal government and the owners have been charged with sex trafficking.

But the more lasting consequence of the Senate hearing are the Stop Enabling Sex Traffickers Act (SESTA) and the Fight Online Sex Trafficking Act (FOSTA) which make it illegal for online services to assist or support sex trafficking. You would think those things would already be illegal, but apparently not. Section 230 in the 1996 Communications Decency Act stated that “No provider or user of an interactive computer service shall be treated as the publisher or speaker of any information provided by another information content provider.” It was this loophole that allowed websites like Craigslist to become the red-light district of the internet.

To get the other side of the issue, I talked to comedian and sex worker advocate Kaytlin Bailey. I met Ms. Bailey through the NYC comedy scene many years ago and asked her what she thought of all this.

“They’re using the shield ‘child trafficking victims’ to crack down on adult sex workers, but no one will admit that’s what they’re doing.” Bailey says. “I’ve been studying this for a while, I think it’s about controlling women.”

And the “they” in question? Bailey says “I think it combines the conservative instinct to punish women for expressing sexuality with the liberal instinct to ‘help’ people they can’t be bothered to understand.”

Interesting theory, Ms. Bailey. But we wouldn’t be doing our jobs as White Nationalists if we didn’t at least consider the possibility that this is all some Jewish plot.

While I’m skeptical that a secret cabal of Jewish pimps is behind the SESTA legislation (although I don’t rule it out), there is some logic to this. The internet revolutionized prostitution like it revolutionized everything else. The internet allowed musicians to bypass the record companies and gain huge audiences without leaving their bedrooms. It allowed writers to bypass the traditional print media. But the internet also allowed prostitutes to bypass the escort services and basically become their own pimps. Any college co-ed, lonely housewife, or 9-5 office girl could do it.

In 2012, it was a scandal when it was discovered that former three-time Olympic athlete Favor Hamilton had been moonlighting as a Vegas call-girl and had been advertising her services online for several years before she was recognized. She was married and apparently didn’t need the money but claims her prostituting was a result of being put on anti-depressant medication.

The hysteria from the feminist and sex worker rights activists is less about “free speech” than about being forced back onto the sex work plantation of escort services and street corners with pimps taking out their percentage for “administrative costs.” Which is certainly understandable. But if that’s the case, I wish they would just come out and say so rather pretending that they are Galileo being burned at the stake for speaking their truth.

I’m hardly a libertarian on the subject of prostitution. I am fatalistic. Assuming they are not rendered obsolete by sex robots in a few years, there will probably always be some demand for prostitutes and some women willing to be the supply. On the one hand, I wouldn’t want to live in a society where prostitutes are selling themselves in shop windows, but on the other hand, what can you do? Prostitution has been around forever; it hasn’t destroyed us yet and is probably a lot less harmful to society than casual hookup culture.

There seems to be a surprising amount of sympathy for prostitutes among White Nationalists who often see them as more genuine that your typical conniving millennial adventuress. But, given the levels of misogyny in the White Nationalist movement, perhaps this should not be surprising at all.

Other White Nationalists I’ve talked to have expressed sympathy for prostitutes on the grounds that prostitutes tend to be extremely racist or “racially woke.” As evidence, they point to how frequently escorts include “No blacks” or “Whites and Asian Only” in their ads. This would make sense. Due to the nature of sex work, errors of judgement can have fatal consequences, so one does not have the luxury of being inclusive.

So hookers are racist, they won’t break your heart and take half your stuff, and they are an ancient institution. Hell, they’re in the Bible. As a Right-winger, I almost want to side with the hookers against a wicked establishment that is assaulting our culture in almost every other conceivable way. Almost.

But in the end, I can’t see how this is in any way our fight. I didn’t see any of these hookers crying when Andrew Anglin was being banished from the internet, so why should I care about their “free speech” problems now? Let me see a Million Hooker March to get Jared Taylor back on Twitter and maybe I’ll consider making common cause with them.

They’ll be fine though. Sex workers of the world may be getting kicked off the internet, but to paraphrase Joan Blondell, as long as there are sidewalks, they will always have jobs.