An Academic Study of the North American New Right 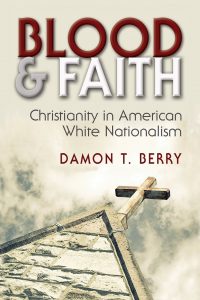 When I was in graduate school, one of my professors likened grading undergraduate exams to fever dreams, in which the events of the day — or, in his case, a whole semester’s worth of lectures — come back in garbled form. I have had the same experience reading about my ideas in the mainstream media.

One expects better of academic researchers, and I have been quite pleased by my treatment in George Hawley’s Right-Wing Critics of American Conservatism and Making Sense of the Alt-Right. But it is still best to brace oneself for the worst. Imagine my delight, then, to encounter within the space of a single week two well-researched and accurate chapters on my work and the broader North American New Right in academic press volumes — one in the book under review, another in a volume forthcoming from Oxford University Press next spring, which I will also review in due course.

Damon Berry’s Blood and Faith is published in the Syracuse University Press series on Religion and Politics, which also features Scott Beekman’s William Dudley Pelley: A Life in Right-Wing Extremism and the Occult; Kerry Noble’s Tabernacle of Hate: Seduction into Right-Wing Extremism; and Jeffrey Kaplan’s Radical Religion in America: Millenarian Movements from the Far Right to the Children of Noah. The series is edited by Michael Barkun, author of Religion and the Racist Right: The Origins of the Christian Identity Movement.

Blood and Faith is divided into an Introduction, six chapters, a Conclusion, and an Epilogue.

The first three chapters focus on Revilo Oliver, William Pierce, and Ben Klassen respectively, all of whom were strident critics of Christianity, which they condemned because of its Jewish origins and the pernicious effects of its ideas. Christian moral universalism undermines natural preferences and attachments to one’s nation and race. Christian ethics encourages the inferior to envy and tear down the superior, and the superior to pity and self-abasement in relation to the inferior, which gives rise to the whole range of Leftist ideologies. Etc. These chapters are generally accurate overviews, although Berry refers twice to the Oklahoma City bombing, which has nothing to do with either Christianity or White Nationalism, and he risibly characterizes The Turner Diaries as William Pierce’s “magnum opus.”

Chapter four focuses on racialist Odinism, specifically Else Christensen and David Lane. Stephen McNallen and the Asatru Folk Assembly (mistakenly referred to as the Asatru Free Assembly) are mentioned as folkish heathens, but they are not classified as racial Odinists. McNallen has now stepped down as leader of the AFA, and he has become much more outspoken about racial and political issues. It think it would be fair to say that McNallen and many AFA members are racially aware and politically active, but they are also genuinely religious people, and they are on guard against people who wish to reduce religion simply to a vehicle for politics.

According to Berry, the broader North American New Right includes the authors of two of the earliest English-language books on the European New Right: Tomislav Sunic, author of Against Democracy and Equality, and Michael O’Meara, author of New Culture, New Right. These books and other writings by Sunic and O’Meara were certainly important influences on my project, and O’Meara went on to publish a book at Counter-Currents, Toward the White Republic, and many articles and reviews at North American New Right.

Berry also includes Stephen Flowers (Edred Thorsson), who writes primarily on paganism, because he published an edition of Alain de Benoist and Charles Champetier’s Manifesto for a European Renaissance and wrote the Foreword to Benoist’s On Being a Pagan, which I edited and which was published by Ultra, which also publishes the neo-pagan journal TYR, the first issue of which was edited by Joshua Buckley, Michael Moynihan, and Collin Cleary. Cleary has also published books at Counter-Currents and writes for North American New Right. TYR has also included translations of articles by Benoist.

Flowers and TYR are interesting choices, and perfectly legitimate ones, since they have both promoted European New Right ideas in North America. But Flowers also illustrates the loose nature of intellectual networks, for I have actually never met him and know very little about his vast body of work. But we have many common interests and mutual friends and are only two degrees separate by a number of intermediaries. It also should be stressed that the primary focus of Flowers and the editors of TYR is on European paganism and neo-paganism. Thus it would be a mistake to infer that all of Flowers’ books, or all of the authors who contribute to TYR, are contributing to New Right metapolitics. Again, like McNallen, they regard religion as something distinct from politics — although it is inevitably more or less related to it — and thus reject the idea that religion can be reduced simply to politics.

Berry’s commentary on my work focuses mostly on the nature of the NANR as a metapolitical movement, how I define the relationship of the NANR and the European New Right, and my views on Christianity. First, on my ideas of the NANR, Berry writes:

In [an interview with Tom Sunic], Johnson was quite self-deprecating about his role in starting the NANR movement, and he deflected the idea that he is a leader of the movement in any official capacity. Nevertheless, it is clear that he sits in a very influential position within this community of white nationalists that is, for lack of a better description, at the cutting edge of an emerging racialist ideological trend. Johnson is then rightly seen not simply as another figure popularizing ENR ideology in American white nationalism but also as someone who is working to develop a distinct intellectual movement within white nationalism in North America through publishing and establishing online resources for the white nationalist community. (p. 183)

I don’t think that the North American New Right has a set ideology at this point, just an agenda, which is to deconstruct the current hegemony of anti-white ideas and replace it with the hegemony of pro-white ideas, which we hope will lead to the establishment or re-establishment of white ethnostates in North American and around the world. I conceive of my role as both contributing directly to this project and also fostering other writers who wish to contribute as well. The North American New Right is not an organization promulgating a doctrine, but a conversation in which many voices pursue common aims, including the creation of an intellectually unassailable case for ethnonationalism.

Second, on the relationship between the European New Right and the North American New Right, Berry correctly notes that I put a greater emphasis on biological race differences and the Jewish question than the ENR.

Third, regarding Christianity, Berry refers to my essay “The Christian Question in White Nationalism,” which he summarizes accurately. I basically agree with the critiques of Christianity offered by Oliver, Pierce, and Klassen, but I argue that it is a mistake to make White Nationalism into an anti-Christian movement, for three main reasons.

(2) Christianity is not our main enemy. Instead, Christianity, like everything else in the cultural and political mainstream, bows to the hegemony of liberal values and the organized Jewish community. The goal of White Nationalism is to create a new, pro-white hegemony, to which the Christian churches will bow as well. The Church has always rendered unto Caesar. Our job is to become Caesar. (For more on this see my essays “Racial Civil Religion” and “That Old Time Liberalism.“)

(3) Christian White Nationalists should be cultivated as a fifth column to sow division in the churches, simultaneously weakening their ability to support multiculturalism and preparing for eventual White Nationalist hegemony over them.

Thus I think that White Nationalism needs to cultivate an ethos of religious tolerance, with the understanding that if such tolerance becomes a feature of our movement today, it will become a feature of the societies we aim to create in the future. This means that those among us who dream of Christian theocracies are simply not going to get their way.

Berry correctly characterizes my approach as follows: “[Johnson’s] position is best understood as an accommodationist stance toward religion driven by the political goal of lebensraum for whites and the deeper concern of racial protectionism. . . . Religion and concerns about religious difference are always subordinated to the goal of a white North American homeland where the survival of the white race can be assured” (p. 185) and “. . . anti-Christianity is not the defining position of the North American New Right. . . . in the NANR the pragmatics of racial protectionism have created a space for tolerance, wherein the problem of Christianity in American white nationalism is dealt with via accommodation and not rejection” (p. 188).

Blood and Faith is a very good book on anti-Christian themes in American White Nationalism. Berry’s writing is usually clear. He has carefully canvassed a large amount of literature. He pays attention to fine distinctions rather than slathering on loaded terms like Nazi, racist, extremist, and supremacist with a broad brush. Unfortunately, he makes use of a lot of tendentious, dismissive, and pathologizing Leftist boilerplate. Deep concerns become fetishes. Ideas he disagrees with are imaginary or mythical. Ideas that scare him are virulent. Etc.

The most putrid passage in the whole book is his account of White Nationalism in the Introduction: “I find it useful to describe white nationalism as a closed society organized around the mythology of whiteness to form an imagined racial community that the white nationalist is obliged to defend in the face of imagined racial enemies” (p. 14). Frankly, it is offensive to refer to one’s extended family as an “imagined” community. And to refer to the people who have brought epidemics of rape and pedophilia to England, Sweden, and Germany as “imagined racial enemies” strikes me as obscene. Lie back and take it, Europe. You’re only imagining this.

Blood and Faith is also poorly edited. Berry mentions “H. L. Menken,” “Ulick Verange,” “Sam Dickenson,” and “Adolph Hitler.” Savitri Devi is referred to simply as “Devi,” as if this were her last name (which was Mukherji), rather than a title (goddess). Thinking that her last name is “Devi” is rather like thinking Saint Paul’s first name is “Saint.” Part of this, of course, is simply due to the fact that proofreaders are unfamiliar with the world of White Nationalism. The fact that this book and others like it are being published is already changing that situation.

For all its problems, I can attest that Blood and Faith is quite fair-minded and accurate in its treatment of the North American New Right, which is now beginning to get the serious attention it deserves. It took decades for the ideas of Marx, Freud, Boas, and the Frankfurt School to permeate academia and the professions, then trickle down into the popular culture until they were pervasive enough to shape the parameters of political debate.

It took decades for another Jewish intellectual movement, libertarianism — including Objectivism and the Austrian School of economics — to establish institutions and begin to shape the culture and political discourse.

In the same way, it will take decades for the New Right to build institutions, change minds, and begin to transform both culture and politics. Counter-Currents and North American New Right were founded only in 2010, but books like Blood and Faith indicate that our efforts are already bearing fruit, even in academia, the sector of our society that is most hostile and impervious to New Right ideas — precisely because the Left, which takes ideas seriously, has spent decades hollowing out, taking over, and fortifying the educational system. It is high time for exponents of true and wholesome ideas to take metapolitics just as seriously.