Davos, or the Technocrats’ Ball 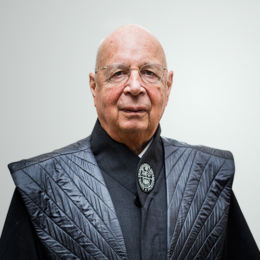 Klaus Schwab trying not to look like an evil mastermind.

We, a select group of human beings . . . — John Kerry speaking at Davos

In this life, one thing counts.
In the bank, large amounts.
I’m afraid these don’t grow on trees,
You’ve got to pick a pocket or two.
— Fagin, Oliver!

The World Economic Forum’s (WEF) first post-Covid gathering in Davos, Switzerland actually came as something of a relief: It gave journalists both mainstream and dissident something to write about other than Prince Harry, his treacherous book, and his atrocious wife. The dog barks, the news cycle moves on. Welcome to the technocrats’ ball. Shall we dance? I hope you watched the show because, whether you know or like it or not, you paid for it, and the bill is about to rise.

Davos is interesting on three levels. One, it is political theater, which is increasing in frequency and volume. Just see the “arrest” of Greta Thunberg last week, Karine Jean-Pierre’s glove-puppet White House press conferences, and anything Zelensky says or does. Two, Davos is a showcase of technocratic language (not technological). This will keep you on your toes when it comes to semiotics, semantics, and subtext. You had better read between the lines, because you are the lines. Thirdly, the media’s response to the conference, and the treatment of the media — depending on their political allegiance — is becoming increasingly instructive in the context of Western politics and its enforcers.

I am sure you know the basics: An annual conference organized by the unelected WEF was attended by around 50 world leaders and 600 CEOs. The entrance fee was estimated to be US$45,000. This gathering of the tribal leaders was not just there for the food, wine, and corporate networking, however. Allegedly, the trade in “sex workers,” who we know as prostitutes, experienced something of a boom last week. Well, Davos is all about economics.

The list of world leaders who didn’t attend is more interesting than those who did turn up, the latter of whom were largely from “developing” countries sniffing around for investment and outright handouts. Oh, and Zelensky, who was after the same thing plus weapons, spoke on video to make his usual demands for more money and tanks with which to poke the Russian bear that little bit harder to see if he and NATO can’t start a nuclear war. Henry Kissinger, who house-trained Klaus Schwab, is reportedly a big fan of Ukraine joining NATO — the one thing everyone knows Putin will not accept. These are big dice to be rolling.

But at Casino Davos there was no Biden, no Sunak, no Macron. There weren’t even any Chinese to speak of, although they may not feel the need to discuss how the world’s resources are to be carved up, as the job may well fall to them soon, anyway. The Colombian President — a very rich man, like all presidents — had stern things to say about capitalism, and he was harrumphed at and largely passed over. Amigo, perhaps you could solve el problema de tu país con la cocaína first. Por favor.

The cast playing the political and corporate hierarchy was augmented by bit-part players. Someone called Idris Elba gave a speech. He is a black actor I have heard the name of, but none of whose films I have been fortunate enough to see. I bet he plays a slave in at least one of them. Bizarrely, Brian Stelter was there, announcing himself as a Fellow of Harvard and hosting a seminar on “disinformation,” despite CNN canning his show Reliable Sources for giving the same message to plummeting ratings.

Representing Britain, my old school-chum Sir Keir Starmer was there, leader of His Majesty’s Opposition (at first I wrote “Her Majesty’s Opposition” from force of habit) and seriously touted as Britain’s next Prime Minister. He said he “preferred Davos to Westminster.” As I say, probably the next Prime Minister. Where did he get 45 grand US? We are always told the Labour Party is broke. Starmer and I may both be Old Reigatians, but I didn’t get a bloody ticket to Davos. The old school tie clearly no longer works.

And, speaking of Labour, wherever there is a hint of evil, there you will find Britain’s most toxic Prime Minister, the man Peter Hitchens calls “the Blair creature.” Antony Charles Linton Blair was at Davos to chat cheerily about the need for digital vaccination programs — not for the benefit of anyone’s health, you understand, but just so the State knows what we are doing, saying, and buying at any given time.

Buying — now there’s a fascinating subject, because it is the stuff of pure economics, like steel tariffs or your groceries or the price of some slag at Davos. Two out of three economists, we were told at Davos, predict a worldwide recession. Sure. And punks like me were predicting it years ago because we read enough pieces telling us that a combination of national debt and deficit plus QE (quantitative easing) is a one-way ticket to Venezuela, Zimbabwe, or Weimar — take your pick. During the week of Davos, the United States hit its debt ceiling — but there were no problems. Janet Yellen just kicked the can further down the road, with a possible default in June. Money makes the world go round, even if it doesn’t actually exist. The money, that is, not the world. Wittgenstein famously began his Tractatus Logico-Philosophicus with the line, “The world is all that is the case.” True, but now the case is full of non-sequential banknotes. Welcome to the ball.

To me, as a confirmed Bezmenovite, the Great Reset looks like normalization. The motivational psychology behind Davos is that vast numbers of ordinary people have been so destabilized and demoralized by Covid and the ongoing financial crisis that talk of steadying the ship will be welcomed. That is why this Davos conference was called “master the future” and not “master the present.” The ruling class doesn’t seem to be very good at that, so we’d better look ahead and start making technocratic and apparently informed promises.

One important aspect of this WEF shindig as far as the rest of us are concerned is that it is beginning to become obvious that the Davos crowd are not only our enemies, but enemies to be feared. Thus, even the Dunning-Kruger crowd, those in the commentariat who think they know better than Soros ‘n’ Schwab’s crew and cluck that these people are crazy, are now starting to realize that this is not insanity, but rather what a certain type of sanity looks like. If you are walking at night through a dark forest and you hear howling wolves, the best idea if you want to survive is not to yell “Shut up, you crazy wolves!” but to run like hell and climb the nearest tree.

As for the WEF’s pet projects, where do we begin? Do some research on the so-called “15-minute city,” and then reflect on the fact that a Swiss politician at Davos suggested the 5-minute city. Start your research with Carlos Moreno, a Latin American civic architect who spoke at Davos. Sounds cool, huh? And all for your own good! Everything you need within a 15-minute walk or healthy bicycle ride. Then look at the other side of the coin with this guy, Coin Bureau, a very erudite content provider. Now make your own mind up. This is the enforced ghettoization of the working class, with financial fines for leaving your hutch. If you’re white, of course — because white people tend to obey the rules (and this is becoming a major glitch in white culture; we really need to stop doing that). Do you think Muslims, blacks, Albanians, and criminals will obey the 15-minute city’s perimeter fence? Gentle reader, they will not. Britain’s first 15-minute city is being planned for Oxfordshire. Funny they should use the home of some of the world’s greatest universities for this ant-farm experiment. (There is no such thing as “Oxford University” or “Cambridge University,” as you may know. They are collegiate cities.)

The WEF are, of course, hot on the trail of Elon Musk. Once a godling for his space exploits and his brain implants and his electric cars, Musk has become a pariah after his purchase of Twitter, on which he has just stated that the WEF wants to become a world government. I would take on extra security if I were you, Elon, old son.

As for the dissident media, Rebel News is an admirable outfit and pitched up, uninvited and unwelcome, at Davos. Ezra Levant, Avi Yemeni, David Menzies, Callum Smiles, and others are brave journalists, and it is instructive to compare their presence at Davos with the attendance of the rather more pampered mainstream media crews. While Reuters got the gig to record the whole event and then promote their material to channels they choose, and which are no doubt pre-approved by the WEF, and while the mainstream media’s usual suspects were allowed access, Rebel News was cordoned off, both literally and by the stratagems of the WEF and its organizers. Every hotel room in Davos was booked by the WEF, meaning that they effectively have an entrance list. If your name’s not down, you can’t get a room (unless maybe you are a hooker). This forces non-mainstream media outlets to stay in neighboring towns, and makes it that much more difficult for them to cover the conference. They still do, to their immense credit. As I said to the representative of a British political party recently who didn’t want to talk to me because I was demonstrably “Right-wing,” as I had written for several questionable publications, soon it won’t be a question of who you want to talk to, sunshine. One day, you’re going to have to talk to me and mine.

The nicest moment in the hours of Davos coverage I watched was the young Japanese citizen-journalist who door-stepped Klaus Schwab — who looks like the love-child of Homer Simpson and a giant sea-turtle. He talked to her at first because, you know, Japanese person, ethnic minority, looks good for the sucker punters. Then he asked her which media channel she represented, and she said she was independent. “No zankyou,” he said, and stomped off with his entourage to another breathtakingly expensive restaurant to nominally pay a bill which, although you are not aware of this, you are picking up the tab for.

If Davos is not just showtime, then it is very serious for you and your family. And don’t forget who picks up the tab for this brave new world: It’s you. As de Niro says in Casino, it’s all done to get your money. If Davos is the technocrats’ ball, we may wish to sit out the last waltz.

« A Political Prisoner on the Meaning of January 6

» A Woman’s Guide to Identifying Psychopaths, Part 6 The Most Common Jobs for Psychopaths