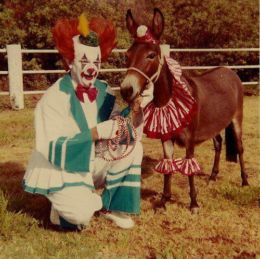 Jason Kessler and American Krogan were host Nick Jeelvy‘s guests on the latest broadcast of The Writers’ Bloc, where they had a panel discussion on the Carny Question in Right-wing politics, and it is now available for download and online listening.

00:01:30 We have a carny problem on the Dissident Right
00:05:30 AlaskaChaga and Nicholas R. Jeelvy, “Chaga Nationalism”
00:06:00 Who is American Krogan? (Substack, Telegram)
00:10:00 Who is Jason Kessler? Two VDARE articles by Jason Kessler, “Subtext To J6 Reign Of Terror: War On Confederate Battle Flag. But It’s Not Working” and “The Left’s ‘Book Banning’ Meme: Fact Vs Fiction”
00:14:00 The carny question; Fróði Midjord and American Krogan, “Elmer Gantry (Review) — What Everybody Ought to Know About Carnies”
00:16:00 Kenneth Copeland believes his own nonsense; Alex Jones, Stephen Colbert, and Cenk Uygur
00:18:30 Left-wing hosts versus Right-wing hosts; Alex Jones is the gold standard of modern carnies
00:22:00 Is there any defined issue by which we know Alex Jones?
00:25:00 Dinesh D’Souza, Gavin McInnes, Ezra Levant, and Rebel Media; carny culture is a white pill showing that Right-wing politics is growing
00:28:00 Carnies have a psychopathic or semi-psychopathic personality; why do people give Alex Jones money for boner pills?
00:30:00 The different archetypes of carnies; P. T. Barnum, white trash nomads, and the Leftist freak show
00:31:30 The defining characteristic of the carny is that he makes a spectacle of himself
00:35:30 What drives Right- and Left-wing carny archetypes to do what they do?
00:37:00 GG Allin
00:39:00 Carnies are selling salvation and truth
00:40:00 The punk ethos and what the Right should learn from it; John Lydon (Johnny Rotten) and Sid Vicious in the 1970s United Kingdom
00:42:30 The key to the carny; the spectacle stage, the grift stage, and psychic pleasure
00:43:00 People on the Left cannot stop their spectacle addiction long enough to enter the grift stage; who are the bulk of white liberals?
00:49:30 Ron DeSantis and the migrants sent to Martha’s Vineyard
00:51:00 Professional wrestling is the carnival writ large and its audience leans Right; QAnon as a post-millenarian apocalyptic cult
00:52:30 Right-wing people who are into conspiracy theories and don’t actually believe them
00:54:00 Elmer Gantry, fundamentalist evangelical Christianity, and grifters
00:56:00 When there’s a huge moral decline, there’s a huge surge in grifters
00:57:00 Jim Jones as a Left-wing preacher, Jonestown, and the assassination of a US Senator
00:59:00 Certain carnivalesque and clownish characters are detrimental for us
01:02:00 There’s a systemic problem with the Right wanting quick fixes
01:04:00 The bulk of people on the Right are hardworking people who don’t have the time to examine issues, and that makes them vulnerable
01:05:00 The evolution of the Proud Boys
01:07:00 Certain personalities around January 6, 2021 had vague notions of being part of a revolutionary movement
01:10:00 Pokémon GO, augmented reality, and the Internet as the medium of modern carnies; Slavoj Žižek on ideology as augmented reality
01:11:00 Josh Neal’s American Extremist
01:13:00 Why do normal, well-adjusted, high-functioning people allow themselves to be conned?
01:15:00 Alex Jones, his grift, and him knowing his audience as marks
01:17:30 Grifting versus honest fundraising and donating
01:20:30 Tucker Carlson on the Queen’s passing, the British Empire, and Tucker Carlson, “This is why they are attacking Queen Elizabeth II”
01:22:00 Carnies are more spectacle than substance
01:24:30 The hypergrowth of certain platforms
01:26:00 Our jobs as dissidents and White Nationalists is to provide alternative solutions
01:29:30 A female in the chat asks if the content on The Writers’ Bloc will ever appeal to more women
01:32:00 Are all spectacles in politics inherently bad or do we need an element of honest magic and showmanship in order to win?; Jared Taylor
01:34:00 The white normie, casuals, and the coming danger of believing in conspiracy theories
01:37:00 Imposing a cost on the things dissidents do, and the Canadian trucker protests
01:40:00 Getting arrested because you’re effective
01:41:00 Richard Houck and a pro-white legal practice
01:41:30 “The Writers’ Bloc with Pox Populi on the Trucker Convoy”
01:44:00 Belief is important to effective salesmanship and showmanship
01:45:00 Gavin McInnes staging a fake arrest by the FBI
01:48:00 The system is afraid of white men getting together, augmented reality, and the sunk cost fallacy
01:50:00 Abusive parasocial online relationships and people thinking the carny is their friend
01:51:30 A video by The Distributist, How the SuperChat Killed the Alt-Right
01:52:30 A video by Imperium Press, Why Capitalism is Woke
01:54:30 Dependent relationships with online personalities
01:56:00 Video games, “whales,” and microtransactions
01:57:30 Donating and not getting anything in return
01:58:30 Simping and not exposing yourself to women you can’t actually get to know
02:01:00 Interacting with celebrities more than flesh-and-blood people in your own life; the Beatles inspiring hysterical behavior
02:03:00 Braggadocio and people being less real in the modern world
02:03:30 Moving away from Internet culture and back into real life
02:05:00 Westernized migrants getting sucked into parasocial Internet behavior, pornography, and rape
02:07:30 Closing remarks