It Really is Fake News 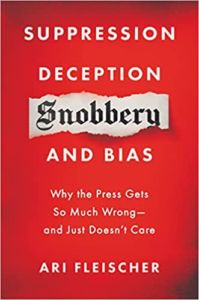 Ari Fleischer was George W. Bush’s Press Secretary during the lead-up to the Iraq War. He was not involved in planning the war, but he did sell that (optional) conflict through his many press briefings in 2002 and 2003. The media that he pitched the war to was unsympathetic to Republicans but highly supportive of Israel and the interests of the organized Jewish community. He was therefore part of a battalion of Jewish advisors and servants to Bush who were neoconservatives.

Neoconservativism is a Jewish movement. Even prior to 9/11, Jewish neoconservatives had drawn up strategies to increase American involvement in the Middle East. One such plan was called A Clean Break. It called for the United States military to secure Israel, thereby freeing it to further dispossess the Palestinians.

In 2016, most of the neoconservatives voted for Crooked H. Fleischer turned in a blank ballot for that election, for his part. But in 2020 he changed his mind and voted for Trump. This is an extraordinary political shift. I cannot explain why a former neoconservative spokesman would shift his allegiances to a President who openly argued against immigration, foreign intervention, and globalist trade policies, but I can appreciate his change of heart.

Fleischer argues that the mainstream media has “dug its own grave” in terms of credibility with the broader public. It has become an increasingly shrill megaphone that only speaks for and to college-educated Democrats. He writes:

One of the reasons our country is so divided is that our press is so divided. Readers and viewers can reliably get much of the news they want by reading and watching the outlets they want. At the same time, people long for one place to go to get the news straight. But as liberal bias took root throughout the media decades ago, FOX and other conservative outlets successfully spun off. If the mainstream media had been doing its job well, conservative media never would have been able to break away in the first place. By failing to play it straight, the mainstream media created the fractured environment we’re now in. (pp. 143-44)

Besides which, the fact is that mainstream media really does lie. They don’t even put up the pretense of objectivity and truth. During the Trump administration, Fleischer was shocked to see the media continue to behave in such a partisan manner after an election. In the past, it was the usual practice for the mainstream media to return to down-the-center factual reporting after an election.

Fleischer argues that during his time working for the White House, the Press Corps favored the Democrats but still tried to stick to the facts. (This is a bold assertion.) Then, by the time Trump was elected, he found that they didn’t even bother to hide their bias. Fleischer points to the shocking CNN segment that was aired on January 25, 2020 where Don Lemon, Rick Wilson, and Wajahat Ali castigated Trump and then insulted his supporters — even to the point of affecting a fake Southern accent to imitate the latter. The fact that Trump had won because of swing-state voters in the North’s Rust Belt seemed to have been lost on them. Such bias and insults further polarize the political climate and fuel a vast sense of mistrust.

The problem starts with the elite reporters who cover the White House. Fleischer hired an opposition research firm to look into the party affiliation of those reporters in the White House’s press room. Many of them, such as those from the BBC, are not American citizens. Those who are US citizens break for the Democrats at a ratio of 12 to 1.

This imbalance exists in part because journalism has become a trade which only Democrat-leaning people take up. Fleischer polled groups of journalists and found that they were nearly all Democrats. As a result, the editors, producers, newsroom staffs, and so on are entirely skewed toward one political party. Thus, the mainstream media outlets are mired in conformity, narrow-mindedness, and groupthink.

Prior to the Internet, the news, which was conveyed entirely in the form of newspapers and evening television and radio broadcasts, were delivered to a broad audience in a package consisting of several items, including international and national news, the weather, and sports. The few news outlets that existed at the time attempted to be objective and presented both sides of political stories. But once consumers began using their computers and smart phones to access the news, the old media’s subscriber base shrank considerably, and many people began reading only what they want to read. Today, editors must carefully tailor their message to a narrow range of viewers who are willing to pay for their coverage. Should an editor publish something which his subscribers don’t wish to hear, it’s likely that many readers or viewers will cancel their subscriptions.

The mainstream media further engages in deception to advance its reporters’ own ideological beliefs, and to rile up those few true believers who read their reports uncritically. During the Trump administration, the deception was obvious for all to see. The Russia collusion hoax was the largest mainstream media deception of those years.

The obfuscation began immediately after Election Day. The press claimed, without evidence, that the Russians had hacked the election. They continued to propagate this lie even as the facts of the story turned out to be entirely false. The Mueller investigation into the matter showed that it had been a fraud all along. And this was far from the only lie the mainstream media told. Another was the story that Trump’s first National Security Advisor had met with some Russian officials during the 2016 campaign. As it turned out, he had met with the Russians, but only as part of his routine dealings with foreign representatives during the Trump team’s transition to the White House. The media likewise amplified a false story about Trump doing nothing in response to the revelation that the Russians were paying Afghan insurgents bounties for killing Americans troops deployed there. Fleisher says that any mainstream media story which cites anonymous sources, such as the Russian bounty story, is a deception.

On top of all this, there is also simple ordinary bias. Fleischer recounts the story of a Texas State Senator, Wendy Davis, who had held a pro-abortion filibuster while wearing running shoes. For a time, Davis was a national superstar. She received mainstream media accolades, large donations, and a softball interview consisting of only six questions. Two of the questions were about her shoes. She might have been asked about the specifics of abortion legislation, but that would have put her on the spot and could have harmed her. Davis was then defeated in her campaign for Governor, indicating that the mainstream media doesn’t understand Texas voters.

The mainstream media lies about how public support for the Democrats. As a result, their polling didn’t pick up on the support for Trump in either the 2016 or 2020 elections. False polls are probably a trick to depress Republican morale and give the Democrats a boost in momentum during election years.

After the 2020 election was finally called for Biden, the mainstream media aired stories about fireworks in London and church bells ringing in Paris. They thought these events were occurring because of Biden’s victory. It was quickly revealed via Twitter and other social media platforms, however, that the fireworks in London had been for Guy Fawkes Day, and the church bells were an ordinary call to mass. In this case, the deception was self-deception: The reporters involved had really believed that others were thinking in the way they did, so they misinterpreted events to affirm their own biases.

The mainstream media also shapes the narrative in the words that they use. If a Republican candidate is being briefed by a member of the DC security bureaucracy, they are being “tutored.” If a Democrat is being briefed, they are obtaining “command of the issues.” Republican political tricks are “schemes,” but Democrats don’t steal elections; they “fortify democracy.”

Fleischer believes that putting an end to mainstream media bias and deception will help bring about national healing. He is uncertain if the industry can self-reform, however. In talks he has given to promote his book, Fleischer has stated that he believes media bias began with Walter Cronkite’s opinion piece where he said that the Vietnam War was lost, despite the fact that the American and South Vietnamese had just decimated the Viet Cong in the 1968 Tet Offensive.

Fleischer isn’t a Rightist in the strictest sense. Other Right-wing activists were aware of media bias against them as far back as the Kennedy assassination. It was only after the mainstream media’s obvious partisanship during the Watergate scandal that Republican heavy-hitters started to think of forming their own networks to counter such bias.

Essentially, Fleischer is saying the same thing that David Duke was saying 20 years ago, and that Wilmot Robertson was saying 20 before him, the only exception being that Fleischer’s predecessors actually named who controls the mainstream media. Fleischer also doesn’t mention the Big Lie at the center of it all. For decades, probably going back to the 1930s, the mainstream media has covered up sub-Saharan pathology. Both this pathology and its cover-up is the open secret that all Americans are forced to deal with. The media only reports on sub-Saharan issues in extreme cases, and even then the reports are slanted. To his credit, Fleischer does criticize the media’s coverage of sub-Saharan rioting during the “mostly peaceful protests” of 2020 in depth.

The message of white advocacy was visible in the mainstream media’s bias during the Trayvon Martin affair, which was hyped by them to boost Obama’s reelection chances. Matt Parrott wrote of that situation:

For [white advocates], the most important and exciting development was the effectiveness with which Kyle Rogers of the Council of Conservative Citizens, Hunter Wallace of Occidental Dissent, Nicholas Stix (Jewish) of VDare, and others from across the movement effectively subverted and scooped the lumbering and lazy media conglomerates at every turn. The mainstream media kept lying, and our people kept catching and exposing them.

The mainstream media and its supporting cast of mattoids, Democrats, and sub-Saharans was able to foster mayhem during the Floyd riots and keep it going through the 2020 election. The military’s high brass mutinied and failed to protect Middle America, while Soros-funded prosecutors failed to punish rioters while punishing those whites who acted in self-defense. The anti-white “civil rights” establishment pulled out an iron fist of institutions which had hitherto been dormant in order to achieve their aims. It remains uncertain if they will be able to keep their victory.

On this point, Fleischer’s book is a step in the right direction. White advocates pointing out the truth of mainstream media bias is necessary, but their reach is limited. A known establishment figure pointing out media bias will get noticed by many more people. Or not: Suppression, Deception, Snobbery and Bias is selling, but it is not on The New York Times’ bestseller list.