Democrats Are the Real Racists (& Why Blacks Don’t Care) 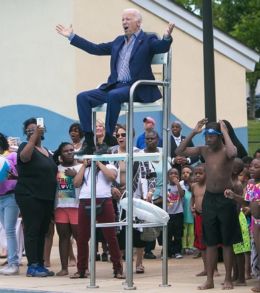 In my near-infinite wisdom on all matters racial, I have noted two major personality flaws of thinking people: They become enamored by the elegance of their ideas to the point of neglecting reality, and they reflexively assume that all people are like them. Such a person might be called a midwit, but I prefer the term “conservative.”

I kid. I kid. One does not have to be a conservative to be a midwit. But since I still read conservatives, and in many cases care what they have to say, I will stick with my midwit-conservative synonym-ism. And nowhere do these midwit flaws display themselves like pelican feathers among conservatives more than in the notion that the Democrats Are the Real Racists (DARR). Thanks to the Black-History-Month-Summer-Celebration known as Juneteenth, many conservatives have recently been dusting off this tired trope in the vain hope that this time it would, kumbaya-like, lure the majority of “African Americans” back into the predominantly white Republican tent. You do remember that the Republican Party was the party of Lincoln, right? And the Ku Klux Klan? They were all Democrats. So vote MAGA today!

The basic logic goes like this: Racist Democrats wish to oppress blacks and get their votes at the same time, so they skew history to bamboozle their sable pawns into thinking that Republicans are their enemies, when historically Republicans have been their greatest allies — they freed the slaves, after all. Meanwhile, those racist Democrats pursue anti-black economic policies such as various forms of welfare, which seem generous but really keep the majority of blacks poor and dependent on the government. In the same vein, they claim to be pro-minority while they flood our cities with non-white immigrants who compete with blacks for jobs. (Black unemployment was at record lows under Donald Trump, don’t forget.)

Democrats also flatter blacks by supporting anti-policing measures. But this only keeps black neighborhoods dysfunctional and dangerous. (Black crime in New York City did plummet under Rudolph Giuliani, don’t you know). Finally, these racist Democrats promise to empower black women through abortion rights, but this amounts to catastrophically high numbers of black abortions. (The black abortion rate is 3.6 times that of the white abortion rate; how racist is that?). And if you’re black and oppose all of this, you get smeared as an Uncle Tom, as black Supreme Court justice Clarence Thomas has known for years.

So through a combination of flattery, gifts, threats, and lies, racist Democrats keep poor blacks suffering on their plantations, just like they did in 1850. The more things change, the more they stay the same. How elegant! How persuasive!

I am aware that vultures have been gnawing away at this dead horse for a long time now, so there is precious little left to beat. Dissidents have been justifiably mocking DARR as a recruitment strategy since its inception for three main reasons, as far as I can tell:

While these three reasons are enough to render DARR completely worthless, I have yet to see a systematic dismantling of the idea which even conservatives would have to take seriously. Is there a more economical reason why DARR fails to persuade blacks not to vote Democrat than that bitches brew of flattery, gifts, threats, and lies? Better yet, could it be that black people have legitimate reasons to vote Democrat, despite DARR?

This is where the two major personality flaws of midwits come in. First, Republicans who promote DARR are infatuated with its internal elegance while never publicly admitting that if it was going to work at all, it probably would have by now. Decades of DARR have not moved the needle one jot. Blacks are just as likely to vote Democrat now as they ever were. More importantly, however, DARR proceeds from the fallacy that baseline humanity is not racist — or, more accurately, not tribal. This stems from how DARR’s proponents in the Republican Party tend to be Western or Northern European white, which is the least tribal and most individualistic group of people on the planet. Basically, the midwits promoting DARR simply assume that blacks are every bit as individualistic as they are, and will therefore be moved by arguments which focus on how DARR will improve their lives as individuals.

And make no mistake, DARR will do that. There is too much data to say it won’t. So bully for DARR for that.

The problem is that black people are intensely tribal. This trait is the result of how they evolved — or didn’t evolve — as an isolated group south of the Sahara for hundreds of thousands of years. They can’t help it. It is who they are. This means that when blacks vote, they weigh what’s good for the tribe against what’s good for the individual, and often the former wins out. Material poverty is something that low-IQ sub-Saharan blacks never needed to rise above before the whites showed up, given their near-universal squalor, and so they remain mostly impervious to economic arguments. Sub-Saharan blacks have also shown themselves to be more violent and less empathetic than other races. Thus, arguments about crime and abortion are just as likely to fall on deaf ears.

So race realism offers a more economical reason for why blacks reject DARR when compared to the more convoluted Democrat flattery, gifts, threats, and lies theory. By appealing to DNA and the resulting average IQ and differing temperament of races, race realism only has to be true once to work, whereas flattery, gifts, threats, and lies — what the racist Democrats presumably do to black people — has to work all the time and everywhere. A much less likely proposition.

Okay, so blacks may not care so much about how DARR can improve their lives as individuals. But is it true that accepting DARR will simultaneously worsen things for blacks as a discrete demographic group in the United States? I would say yes.

For blacks in the United States to make their presence felt on the state and national stages, they need one thing more than anything else: space. They need to completely dominate entire cities, or portions of or precincts of cities, in order to be able to elect their own as representatives. These people then go to the state capital or to Washington, DC to represent them, as well as to push whitey around as best they can. Blacks come to do this not by fighting crime or reducing unemployment, but by doing as little as possible to stop their own misbehavior in their own neighborhoods. That way, non-blacks stay away. Nobody wants to live with them, and as a result, blacks have spaces to call their own. They may not be very nice spaces, but that doesn’t matter when they are tallying votes in the House of Representatives, does it?

Democrats allow blacks to have their own space as blacks, and this is worth a cut in the standard of living for most of them. On the other hand, Republicans through DARR offer blacks a higher standard of living, but less space, since low unemployment and low crime and similar good things will attract non-blacks to spaces formerly controlled by blacks. Blacks will suddenly find themselves minorities in their own cities, precincts, and neighborhoods. With less space comes less influence, which is what Republicans unwittingly promise blacks when they offer to improve their lot. This is why so many blacks loathe Republicans: They threaten the racial identity and continuity of blacks in America, and thus chafe against their innate sense of tribalism.

And you know what? They’re right. In this sense, DARR Republicans naïvely treat blacks as Americans, not as blacks. More specifically, they treat blacks as if they were white Americans — that is, as people who in large part care more about the economy and standard of living than they do tribalism. That black people on average are nothing like this is the main reason why claiming that the Democrats Are the Real Racists will always fail.

« What Is the Ideology of Sameness? Part 1