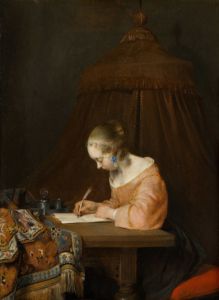 It gives me great pleasure to introduce Counter-Currents’ new “advice column”: Ask A. Wyatt Nationalist. The name, of course is an affectionate tribute to cartoonist A. Wyatt Mann, who approved the idea.

As part of our new Commission an Article feature, A. Wyatt Nationalist will give a White Nationalist perspective on your questions for a donation of $100 or more. New Paywall subscribers can also commission one article per year. Just send in your questions to [email protected]ents.com.

A. Wyatt Nationalist can be any Counter-Currents writer, depending on your question and which writers are available. Our first question comes from Alexandra O. and is answered by Cyan Quinn.

I’m not at all sure how many women consider themselves White Nationalists, and you don’t have to reveal the numbers if you choose not to, but I’m wondering how we can attract more women? It seems to me that most of the posts and verbal discussions are by men, and many of the topics are over my head at times, reflecting a masculine perspective.

I’m especially interested in how women can have an income and have children at the same time. How can we convince women that college and career can be ‘put off” until their early 40’s, after they have had kids? I’m especially thinking of women who have work-at-home income, which allows them to stay home and homeschool their kids.

The other problem with women and WN is that we are so conflated in the press with White Supremacy, which no right-thinking woman would want to be associated with. How can we make known our ideology and how it differs greatly from ‘supremacists,’ and how can we help women fight many of the problems they are seeing with school curricula for their children, and other current social problems affecting children?

I recently discovered actually that around 34% of our readers are women! Kathryn S. wrote about this in “Perilously Fair: Ladies of the Lake.”

At our event with Dr. Roger Pearson, I was pulled aside by a young man who asked me, “Why Counter-Currents over AmRen or VDARE?” For me, and I think this also appeals to other women, Counter-Currents claims all of western culture as our own including the arts and literature and places an emphasis on appreciating this culture through literary reviews like this one, histories like Kathryn S.’s “A Tale of Two Fires & the Fall of Old Rome” or Alex Graham’s “Thomas Jefferson and the Declaration of Independence,” and birthday commemorations of Right Wing figures like William Butler Yeats and Filippo Marinetti. (Do you need an excuse to throw an Italian Futurist New Year’s Party?)

Also, Greg Johnson is unique among new right thought leaders in that he is the only one who I’ve heard actually recommend a practical policy proposal to encourage high IQ young women to have families while they’re young. Although he hasn’t written about this yet, in an “undercover” interview he gave at the London Forum in 2017, he proposed that women earn one year of free college for every child they raise in the home until age 6.

I remember when I heard this, I had recently abandoned my own pre-med major in favor of having a family before 30. I think this is a practical pro-natalist policy proposal, and I admire Greg Johnson for his consideration and appreciation of women and their challenges in modern society.

Back in 2017, I briefly joined a Nationalist women’s group that met in person and was part of a larger men’s group. After Charlottesville, the men decided to ban the women from discussing politics in our chat as well as from any discussion on the direction of the group or organizing strategy. This was very weird to me since women historically have always played a large role in social and volunteer organizing. So I quickly realized this was not the environment for me.

Women have always had an aspirational role as primary educators of their children, social organizers and promoters of virtue in society. For example, women are the primary on-the-ground organizers against CRT in schools. Phyllis Schlafly managed to have six children and an outstanding political career. Michelle Malkin is another example of someone who manages to balance homeschooling, social organizing, and journalism. And we can’t forget these Women of the far Right.

We desperately need to solve the immigration issue which would improve the labor prospects for young men who want to support a wife and family but can’t generate the income necessary. (Not to mention the demographic bit!) The first step is to impose an immigration moratorium and mandatory e-verify. We need to deport all illegals, abolish birthright citizenship and impose heavy taxes on remittances. That alone would encourage voluntary re-patriation of recent immigrants and dramatically improve the labor and housing market for US citizens.

Regarding White Supremacy/White Nationalism, I simply think there need to be more calm, rational people in the public sphere who identify as white nationalists and promote ethnonationalism for all peoples.

For example, I had a wonderfully interesting conversation with a supporter in Hawaii who suggested we might get along well with the Hawaiian Nationalists. They want what we want: separation and self-governance. While I don’t think we need people of color to argue our positions to make them legitimate, it’s so nice to find allies of color who recognize there are irreconcilable differences between the races and also want a peaceful solution. People who want to come to the negotiating table and lead their people the other way when we agree to separate peacefully.