The Extraordinary Woman from the Midwest 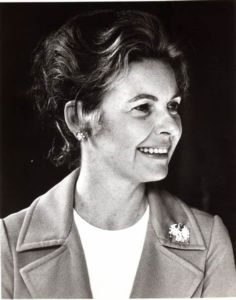 Phyllis Schlafly’s critique of the Republican Party changed its focus and direction.

Many of the greatest pioneers of Right-wing political thought in the United States are women. Right-leaning men are often too busy with their jobs and putting out the fires to be prophets. Female activists, for their part, have a remarkable ability to challenge and change the direction of institutions. One such woman was Phyllis Schlafly (1924-2016).

She was born Phyllis McAlpin Stewart in Saint Louis. Like a great many Americans, she had Scots/Scots-Irish ancestry, but the dominant ancestral strain was from the branch of Roman Catholics who originated in Maryland in the seventeenth century. From that colonial hearth, her ancestors moved west to frontier Pennsylvania and became prominent citizens. Like many other Pennsylvanians, they kept migrating westward.

Saint Louis is also a city where it is easy to develop Right-wing views. This may be due to the following factors:

After President Kennedy was murdered by a lone antifa activist in Dallas, Schlafly, a dedicated Republican activist, decided not to disseminate any anti-Democratic Party metapolitcal content. She recognized that the country would see an attack on the Democrats as an attack on the late President at the time. She instead looked at the problems within the Republican Party and wrote a clear account of them: A Choice Not an Echo.

The account is clearly written. Every sentence is as easy to understand as “Mary had a little lamb.” Complex ideas are packaged at an eighth-grade reading level. This is a sign of high intelligence and excellent communication skills. Excessive verbosity can kill an important idea.

Schlafly argues that the Republican Party was divided into two ideological parts which roughly aligned with different regions. On one hand was the Eastern Establishment. They were represented by men such as Wendell Willkie and, later, Thomas Dewey. Then there was the conservative faction, whose power base was in the Midwest and was led by men such as Senator Robert Taft of Ohio.

The narrative starts with an enumeration of the considerable Cold War disasters that had come to pass up until 1964. This includes the Soviet Union swallowing up Eastern Europe, the fall of Cuba, and the no-win situation in Vietnam. (Note that the latter was written before LBJ “escalated” the war after he won the 1964 election.) Schlafly argues that these calamities were the result of the Eastern Establishment Republicans being a “me too” echo of the Democratic Party. In such a circumstance, America was given a choice between liberal, semi-Communist internationalists bent on aggressive foreign policies in the wrong place and at the wrong time, and a Republican opposition that wanted to do the same things, only more effectively.

She is especially critical of the Republican Party effectively ceding the election of 1940 by running Willkie as the candidate. Willkie wished to carry out Roosevelt’s policies, but did not have Roosevelt’s considerable personal charm and political skill.

Schlafly is one of the first political activists to point out that political polls are often lies meant to puff up one candidate over another. Willkie’s nomination was the result of a slick advertising campaign and false polls. When the election came, Willkie’s sandcastle campaign was washed away.

In the election of 1940, America got an echo, not a choice. With Roosevelt at the helm once again, he was free to make whatever maneuvers necessary to cause the United States to enter the Second World War. Schlafly argues — and a great many others agree with her — that Roosevelt knew about the Pearl Harbor attack beforehand and deliberately let it happen. (I am uncertain if that is true, but it is not unreasonable. It is certain that the Roosevelt administration carried out policies that were designed to provoke Japan.)

Concerning the election of 1948, Schlafly makes the case that Thomas Dewey should have won. The Democrats were split due to “civil rights,” but Dewey’s campaign was mild: He took no risks, failed to take on the dysfunctional New Deal programs that remained, and failed to promise to go after those Communists who were working in the US government. False polling had an impact on the 1948 election as well. Dewey was set to win — until he didn’t. 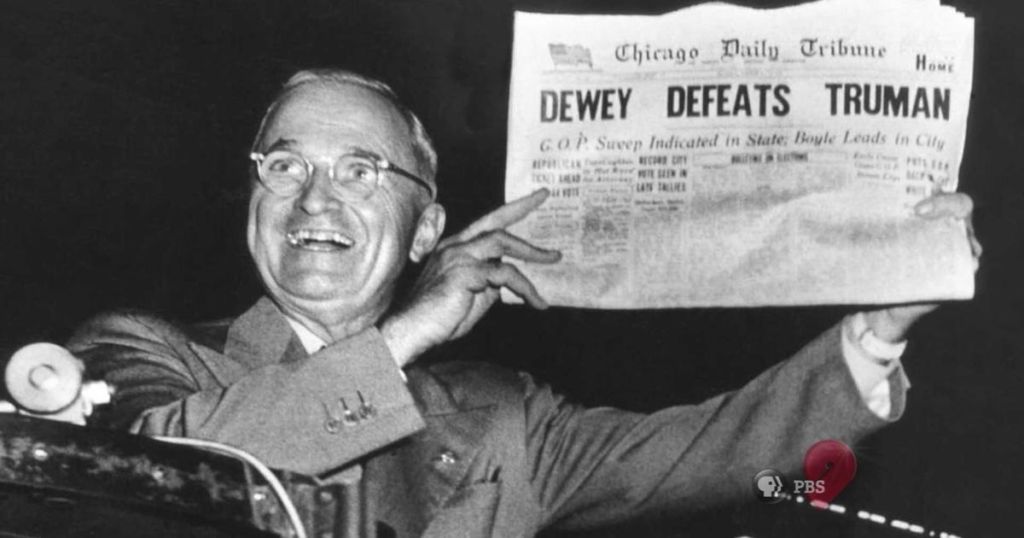 The 1948 election was the first race in which false polling was unquestionably a factor. Thomas E. Dewey was in the lead according to the polls, but he lost when the votes were counted.

The book views the Eisenhower administration from the Right. Schlafly criticizes Eisenhower’s internationalism, but the main thrust of her critique is against the GOP “kingmakers” and their attempt to sabotage Vice President Richard Nixon — a tough anti-Communist who had taken down Alger Hiss. Many of the “America Last” internationalists were extremely angry that Hiss was outed as a Red. This lingering anger was part of the reason why Nixon was forced out of office in 1974.

The 1964 presidential campaign is the book’s central focus. Schlafly supported Barry Goldwater. She argues that Goldwater was able to cut to the heart of problematic Cold War matters with ideas that were workable, and easy for a broad array of people to understand. For example,

[t]here is a very simple solution to what to do about the problem of world communism: just stop helping the communists. The Soviet empire would die of its own economic anemia if Democratic administrations didn’t keep giving it massive blood transfusions, such as the sending of sixty-four million bushels of American wheat.

Meanwhile, the GOP’s establishment wing organized against Goldwater. The pattern in 1964 was no different from the pattern we see today. Goldwater’s supporters were called “extremists,” while white mattoids and groups like Black Muslims and Congress of Racial Equality (or CORE, a “civil rights” group that was engaged in acts of “civil disobedience” designed to spark violence) were given a free pass.

Suffice to say, Goldwater lost the 1964 election by a large margin. The victor, Lyndon Baines Johnson, was a vigorous President and lawgiver, and all of his vigorously executed endeavors came to bad ends. The wounds inflicted upon America as a result of his policies remain. America didn’t heal from Vietnam; time merely passed. The 1964 Civil Rights Act has become a malignant second constitution. The 1965 Immigration Act is a disaster that is turning America into a future Lebanon. And lingering Great Society programs feed sub-Saharans nobody wants, and educate them to become a menace.

Although he was badly beaten in the ’64 election, Goldwater’s ideas were not repudiated. The conservative movement reorganized in a way that made Ronald Reagan presidency possible. Although Reagan had some drawbacks, such as his amnesty for illegal immigrants, one needs to recognize that in terms of the political spectrum’s Left and Right limits of the 1940s, Reagan was very Right-wing indeed. Reagan’s presidency destroyed the Soviet Union, after all. 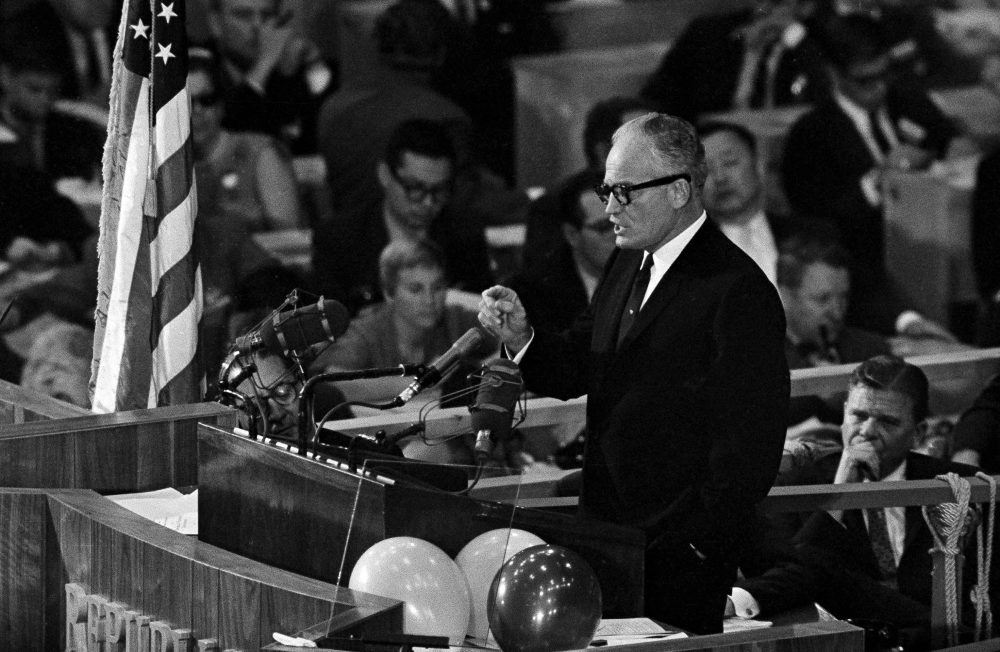 Barry Goldwater lost the 1964 election by a landslide, but his ideas were not defeated. The conservative movement, for all its faults, started to look very wise indeed as the Johnson administration fell apart in the face of the “civil rights” and Vietnam disasters.

A Choice Not an Echo was revised and reprinted many times. The last edition was updated to cover events up to 2016. In it, Schlafly correctly describes a major problem of the George H. W. Bush administration: While he coined the term “New World Order,” he failed to define exactly what that new order was. This created enormous distrust and caused Bush to lose many Right-wing voters.

She argues that although Bill Clinton was a heartland American, he quickly became an errand boy for the Eastern Establishment. She reminds the readers of Clinton’s shady dealings with Chinese corporations and financiers. She also correctly diagnoses the problems of Bob Dole’s 1996 presidential campaign, where the deadly serious issues raised by Pat Buchanan’s campaign were ignored by the GOP establishment. 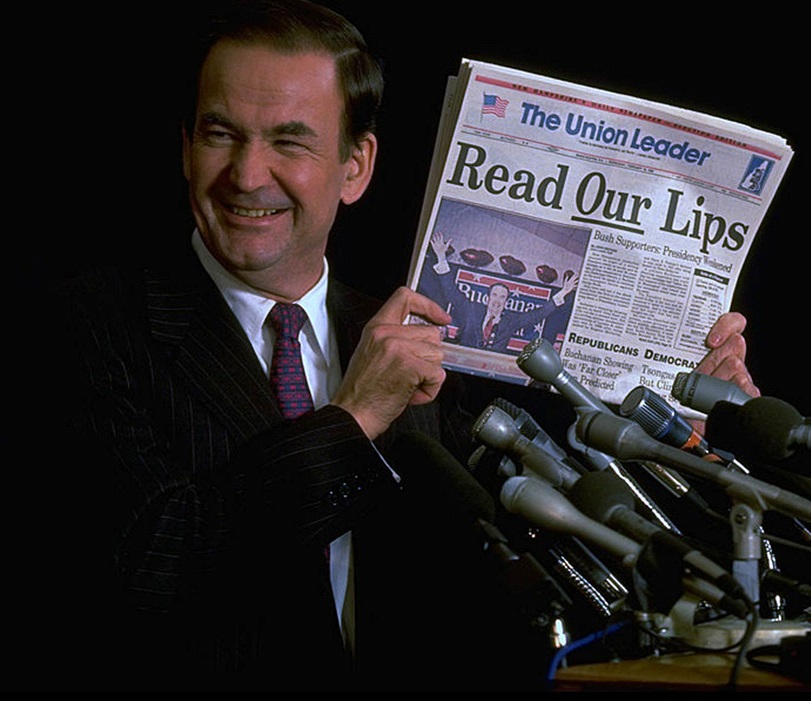 The 1990s were a decade in which the American political classes made several mistakes. The most critical one was ignoring Pat Buchanan’s ideas.

The 1990s were a decade when America, and especially the American Right, lost many opportunities. The Republican establishment and the political Right went on an anti-Clinton crusade that was less than productive. They focused on Clinton’s personal issues — Monica Lewinsky, the draft deferment, and so on — rather than chip away at Jewish control over American society or pointing out the gathering menace of Islamic terrorism. One could say that the conflict with resurgent Islam turned out to be the New World Order.

The policies of George H. W. Bush, Bill Clinton, and George W. Bush ended up getting the United States involved in at least three quagmire wars, along with the loss of most of America’s industry. Today the United States is locked in a new cold war with China, in no small part due to the decisions made by senior government officials in the 1990s.

Phyllis Schlafly was an extraordinary woman. In 1965, she predicted the militarization of space in her book Strike from Space, and in the 1970s, she organized against the Equal Rights Amendment (ERA). This constitutional amendment was on its way to victory until Schlafly realized that the amendment would strip away common-law protections for women.

It is remarkable how poised and professional Schlafly was during the Stop ERA campaign. In televised debates she smiled, dressed well, looked good, and forcefully and clearly made her points. 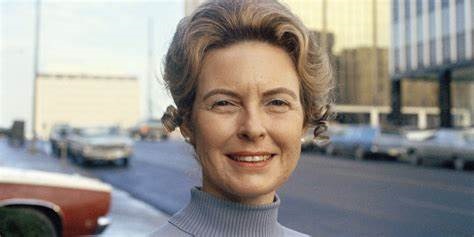 Phyllis Schlafly mastered the basics. Her countenance was pleasant. She dressed well. Her posture was impeccably correct in televised debates against Betty Friedan (Jewish). In those debates, Friedan scowled, slouched, and looked dour.

A Choice Not an Echo was published at the height of the Cold War. Since the Soviet Union is no more, many of the issues she raises no longer apply. Eastern Europe is free of Soviet domination — but what obligations does the United States have there now? Should the United States go to war for Ukraine or Armenia? It is certain that the internationalist “America Last” folks push for war there while heaping disdain upon the heartland Americans who must do the fighting and dying.

Using the conflict with Iraq on behalf of Israel as a yardstick, an ally with an American security guarantee gets thousands of Americans killed in place of their own soldiers, trillions of dollars in security costs paid for by the American taxpayers, and billions in direct military and economic aid. Americans, especially from places like Saint Louis, merely get a campaign ribbon that gets them a cup of coffee — along with 75 cents. And those are the lucky ones. They also might get a traumatic brain injury.

The book likewise glosses over “civil rights” and sub-Saharan pathology. There are only two passing mentions of “civil rights” issues, and the most serious one indicts the Establishment Republicans for inciting Negroes to riot against Goldwater. Since 1964, “civil rights” has grown to become a bigger threat to America than anything a foreign power can do. Regardless, A Choice Not an Echo remains one of the greatest political books of the mid-twentieth century, and Phyllis Schlafly’s career is worth emulating.