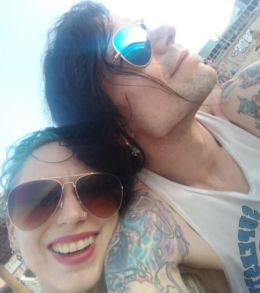 Vikki Spit and her fiancée. Spit has become the first person in the UK to receive compensation from the government for a death — her fiancée’s — resulting from the Covid-19 vaccine.

Beware the Ides of June

Under British parliamentary rules, a vote of no confidence in a Prime Minister is similar to a recall vote in the United States, but it is the members of the incumbent PM’s parliamentary party — 359 Conservative MPs, in this case — who vote, and not the people. The peons only get to vote in general elections, where their choice is essentially between two brands of the same soap powder.

If a sufficient number of letters proposing a Conservative vote on dear leader are submitted by MPs to something called the 1922 Committee (possibly the only men in Britain who still wear monocles), then a vote of confidence in the Prime Minister there must be. The 1922 Committee should, presumably, be celebrating their centenary, but they look a lot less keen on partying than Johnson’s crew do. Probably too busy preparing for the coming grouse-shooting season and discussing the latest fashion in spats.

Alexander Pfeffel Boris Johnson is as ridiculous a man as his name suggests, and if you think that’s laughable, you should see the names of his many children, by many mothers. Here is a selection:

Johnson’s love-life aside, he won the vote, but not convincingly, with 41% of his own parliamentary party voting against him. Under Conservative house rules, no similar vote can take place for a year.

I have always thought that Johnson would get bored with being Prime Minister as soon as people stopped calling the equivalent of “Hail Caesar!” at him in the street. He is a flighty, narcissistic man and, if he does leave Downing Street and the governance of Britain, and if we are instructed by his love-life, he will soon find something or someone else to screw. He has certainly screwed the UK.

It is a general rule in the UK that when Muslims shout “Jump!”, the British government responds, “How high, Mohammed?” And so, when a mob of hugely bearded men demonstrated outside British cinemas intending to show a movie about Mohammed’s daughter, The Lady of Heaven, the cinema chain Cineworld immediately pulled the film. Another chain, Showcase, followed suit. No one is going to see that movie, so that was £12 million well spent. No Oscars for you, my dusky friends — but don’t panic. It’s just a question of everyone keeping their heads. Literally.

There is more to this story than meets the kufr eye. The Muslim Council of Britain called the film “divisive,” but Islam is already a house divided. The main sectarian division is between Sunni and Shi’a. No, not the pair who recorded I Got You Babe, but the major split in the Muslim world, which is broadly 85% Sunni. This is a division between two religious tribes who believe, I don’t know, that Mohammed was left- or right-handed, or something. (It was actually to do with who succeeded the prophet.) Who knows? Who cares? When mentally impaired people have an argument, you don’t need to know why; you just try and stay out of the way.

The salient points are wearyingly familiar. The British police did not see fit to attend the raging mob, threats were made and they were not veiled (unlike a lot of Muslimas), and ultimately the film — made by a Shi’a cleric — was withdrawn “for the safety of staff.” Actually, this was not a mealy-mouthed excuse. Muslims have long had the power to control what we watch with threats of violence.

It is worth noting — the “takeaway,” as American pundits say — is that when you import Islam, you also import its internecine warfare.

Getting my Scouse in order

I have perhaps been unnecessarily cruel to the English city of Liverpool, and indeed its football team, in recent outings. What happened to their supporters in Paris at the Champions League Cup Final, however, shows how far the media will go to protect brand Islam.

Before the game between Liverpool and Real Madrid, a number of young men tried — and some succeeded — to break down the barriers at the Stade de France and gain entry without tickets, or with tickets which were at best forged. This soccer insurrection turned out to be a sort of Mohammedan January 6, but much more violent, and was blamed on Liverpool supporters, who were promptly tear-gassed before being vilified in the French media.

It was nothing to do with them. Camera footage clearly shows hordes of young Muslim men who not only gang-rushed the gates, but also robbed decent Liverpool and Madrid fans. Where the first-person accounts in the first linked article carefully avoid mentioning ethnicity, this article tallies more closely with Paul Joseph Watson’s video, which is worth watching in full to see the media in full smokescreen mode.

France is past redemption, and it will soon not be the French who represent Britain’s closest enemy, but the Islamic Republic of al’Francia.

So, my apologies to Scousers everywhere. I don’t care what the rest of Britain says about you. You’re alright.

Lenny Henry is a black English comedian who at one time was actually quite funny. He was an excellent vocal impressionist and, although he played up the rolling-eyed, Tambo ‘n’ Bones schtick, he raised a smile, which is all you can ask from a jester.

Then, as his career started to wane and he began to find himself doing more Premier Inn adverts, he turned to the last refuge of the black scoundrel: racism.

It is well known to every white English person that if no black faces are seen joining in with a certain cultural practice favored by whites, then that practice is raaaaaaaaaacist! In recent years, these include opera, skiing, the countryside, reading, the theater, hiking, and not robbing people in the street. Alright, already. I was just pulling on your coat about the last one. Or was I . . . ?

Black people, you see, have no agency. They must be told what to enjoy culturally, as they are rudderless and confused without the guiding hand of the white man. Plus, they want to do these things but, of course, there is the inevitable line of white supremacist enforcers surrounding the theaters and the canals and the ski-slopes. They have dogs and batons, and they will not tolerate blacks joining them at the opening night of The Barber of Seville.

Henry has now come out and said that Glastonbury is racist because he didn’t see any black or brown faces in the crowd photos.

For non-Brits, Glastonbury is now the UK’s most famous live music festival, although it has gone from being a rough-and-tumble get-together featuring the latest cool bands to a corporate-sponsored, middle-class wankfest featuring acts equally backed to the hilt by big companies, and throwing in the occasional rap star for colored-minstrel credibility.

Henry doesn’t seem to grasp two salient points. One: Perhaps the brothers and sisters don’t like the music. Two: Blacks are told on a daily basis that all white people are racist. Why would you want to stand in a field surrounded by the Klan?

Henry is just the latest in a long line of ungrateful blacks who can do nothing but whine and complain about their great good fortune in living in Great Britain. Oh, and a third point: I’ll bet a lot of the white supremacists who do attend the festival are secretly relieved that there are no blacks there, or Muslims pretending to be black. The fewer blacks at an event like this, the safer whites will be. If you value your safety, white privilege comes in jolly useful on occasion.

It’s funny until it’s not funny. A British man who has donated blood all his life has been told he can no longer donate. Mr. Leslie Sinclair has donated 125 pints of blood over the years — about 15 bodies’ worth, by my reckoning — but has been told that he can no longer donate. The reason? HIV? Monkeypox? Hemophilia? Vampirism? Think again, my friends.

This gentleman has been turned down for the reason that he would not answer a question as to whether he is pregnant on a form before his donation. He is a 66-year-old man.

As noted, this stuff is funny until it isn’t. Blood banks are an essential part of saving lives. Incidentally, blacks are very reluctant to give blood, despite the fact that it is much needed, as there are conditions which affect Trayvonne DeShawn much more than they affect John Smith. In this brave new world, people dying for lack of blood, when set against the necessity to change reality, is just collateral. Take that to the blood bank.

Vikki Spit became the first person in the UK to be paid compensation by the government (meaning the taxpayer) for the death of her partner after Covid vaccination. She was given £120,000 (around $150,000). A slow trickle of similar claims will soon turn into something of a torrent. I don’t wish to appear insensitive, but this is going to be an expensive year or two for the taxpayer — sorry, government.

This was a vaccine that was rushed through, insufficiently tested, unproven in its claims, and looks very much like a Ponzi scheme by big pharma. I seem to recall in Britain that new treatments using the delivery system of the syringe and not a spoon or a lump of sugar were supposed to go through clinical trials for seven years. Even then, mistakes were made. Those of you reading this in the old country will probably have heard of the Thalidomide scandal. Thalidomide was a drug to treat morning sickness in pregnant women at the start of the sixties. It may well have done that, but it also produced birth defects. Babies were born with withered arms or legs.

I always knew that the “Thalidomide generation” were the same age as me when I saw them because the tragic medical oversight happened the year I was born. Fortunately, my mother never suffered from morning sickness.

To return to Ms. Spit. It is something, I suppose, but when you see the compensation some complainants receive for racist remarks or some such nonsense, £120,000 doesn’t seem much for the life of a loved one, particularly one killed as collateral in a state — or rather, globalist — experiment.

And that is the state of the nation.