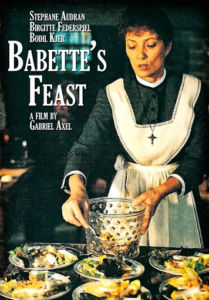 Recently, a friend who has rubbed elbows with the highest echelons of haute cuisine recommended that I see Babette’s Feast, a 1988 Danish film about a French lady chef coming to a quiet Danish village. This film has apparently been a cult classic among chefs ever since it came out. Being something of a gourmet, I was intrigued by the idea of a film about food, and of course much of my work within the Dissident Right has focused on observing the contrasts and tensions between the Northwestern, Eastern, and Mediterranean poles of European civilization.

The idea of a cultured French lady trying to get along and serve food to simple Danish peasant fishermen sounded like it had rich potential for both comedy and reflection about our different natures. Quietly, I was expecting something a little like Chocolat, a modern morality tale about letting it all hang out and teaching those frumpy Nordies how to live a little. There are elements of that; Babette’s Feast is a very different film, however.

Let’s start at the beginning: We are introduced to a couple of aged spinsters, the sisters Martine and Filippa, whose father was a preacher who founded his own ascetic sect. They live in a tiny, dreary fishing village on the windswept coast of the Jutland peninsula, spending their days ministering to their now deceased father’s ageing and dwindling congregation.

Both sisters had a chance to marry but chose to remain with their father and assist him in his duties as a preacher. Martine had the chance to marry the young lieutenant Lorens, who briefly joined her father’s congregation, while Filippa’s singing voice was noticed and nurtured by the French opera singer Achille Papin, who was visiting their village for its quiet and isolation. Years pass and the sisters remain aged and unmarried when one day a woman arrives at their doorstep, bearing a letter by M. Papin in her hand. She is Babette and her husband and son have been shot in the repressions following the crackdown on the Paris Commune. On the recommendation of M. Papin, she seeks refuge with the two sisters in their tiny village and agrees to serve as their housekeeper in exchange for their hospitality, even though they have no money to pay her.

Babette makes a home for herself in the small village and stays there for 14 years. All that she has linking her to France is her lottery ticket. She learns the language and adapts to the local culture and cuisine, and even though she initially turns her nose up at bread-and-ale stew, she soon finds local herbs that improve its taste. Her maintenance of the sisters’ household frees them to do charitable work with the poor, for which the entire village is grateful.

After 14 years Babette’s nephew, a sailor on a commercial ship which often visits Fredrickshavn, brings her important news: She has won the lottery and a 10,000 francs cash prize. Martine and Filippa are saddened because they believe that Babette will use the prize money to return to France and leave them. Babette asks them for permission to prepare a “real French dinner” for them and their congregation on the occasion of their preacher father’s 100th birthday. Reluctantly, the puritanical sisters accept. The congregation, wary of the temptations to sin that such delectable food may elicit, make a vow to not comment on the food or drink, however, and consume it as they would the humblest of repasts.

Babette brings in ingredients all the way from France to prepare her feast. On the auspicious evening itself, the local lady of the manor, herself a devotee of the sisters’ father’s teachings, arrives and brings her ageing nephew, now General Lorens, in tow. General Lorens is none other than Lieutenant Lorens, who at one time romanced Martine but ended up devoting himself to his career instead. Even though he was influenced by the pastor’s teachings, the General is the only one who hasn’t taken a vow not to comment on the food. The feast commences and the General soon reveals that he has enjoyed very similar food in Paris. The exquisite seven-course meal has to be seen to be believed, but it made me understand why the film is a cult favorite among chefs and also made me regret seeing it on an empty stomach.

It is at the feast’s conclusion that we understand the true meaning of the film. The diners are so overwhelmed by the food’s artistry that they bury all their long-simmering grudges, forgive each other their sins, and are driven to spontaneous adulations of God, the deceased pastor, and the ever-nearing stars. Frightened though they may have been of a “witches’ sabbath” unleashed by Babette’s feast, they are instead treated to a night of spiritual joy. It dawned on me at that point that I was watching a “mysterious stranger” type of story. How many times do we see this in folklore? The poor man sees an old beggar at his door and takes him in, even though he himself has precious little. His generosity is repaid many times over when the beggar turns out to be a magical being in disguise, more often than not Odin himself in the Scandinavian context.

Indeed, Babette’s magic is not Odinic or in any way supernatural. Her magic is the magic of immense creative talent. She used to be the chef of one of Paris’ finest cafes, where General Lorens once dined. The sisters thank her joyfully for the greatest feast they have ever had, or ever will have, and Babette reveals that she has spent all her lottery winnings on the feast, and that she will never return to France and never intended to do so. All she wanted was to have her feast — or, in her own words, or more accurately Achille Papin’s words as quoted by her, “Through all the world there goes one long cry from the heart of the artist: Give me leave to do my utmost.” I can certainly relate to it. Filippa then responds, again quoting M. Papin that “This is not the end. In Paradise, you will be the great artist God meant you to be. Ah, how will you enchant the angels.”

That sounds rapturous and happy and there is great comfort in those words, if they are true. Earlier, the General reflects on his choices in life and how he forswore family life with Martine in order to pursue his career, but Babette’s meal leads him to conclude that through faith, he will nevertheless be granted a life with Martine in Paradise, one more perfect than the physical one they might have had on Earth. This echoes M. Papin’s letter, where he admits that while he regrets never bringing the talented singer Filippa to the Grand Opera in Paris, he knows that the grave is not the end and that he’ll hear her voice again in Paradise: “Ah, how will you enchant the angels.”

The story the film is based upon is set in a village in Norway’s far north, and traces of it remain in the dialogue, such as when the parishioners reminisce about the preacher walking over to the village across the fjord when it froze over. Director Gabriel Axel moved the film’s setting to Jutland’s flat and sandy coast because he found the villages of the Norwegian north “too scenic.” Lorens’ friends from the military academy seem to agree: There’s precious little to excite a young cavalry officer in sandy northern Jutland. This is ultimately a human drama which is reinforced by the village’s dreariness, but I think that this is important for the film’s ultimate significance as a Christian morality piece. Babette’s feast is, among other things, a story of two brilliant artists, Babette and Filippa, languishing in what our American friends would surely call, with the droll poetry of their vernacular, “the ass end of nowhere.”

In this sense Babette offers a theodicy for the problem posed to the talented man who cannot access the capital necessary to ply his art, a problem I have encouraged talented young men to bedevil themselves with in several essays for this august publication. Our enemy can be defeated if we starve him of the talent he needs to run his empire, but this also means giving up all hope that our gifts will ever be used to the maximum, especially those of us whose gifts depend on utilizing the capital which the empire has at its disposal. The film’s two women — Babette due to circumstance and Filippa due to piety — are forced, as I suggest to young men, to languish in the ass end of nowhere, not practicing their art and without leave to do their utmost. The film’s conclusion gives them the comfort that their gifts will finally be allowed to flourish in Paradise.

This comfort can only be enjoyed by the pious, by those who truly believe in Paradise and the certainty of salvation. There’s no such thing as free faith; it requires commitment and sacrifice. As I argued in my previous article, skepticism is the natural impulse, whereas faith requires effort. It requires taking that leap of believing that in the end, talented man will not remain an unanswered question and an unfired gun, but that there is a place where we can do our utmost.

Ah, how we will delight the angels!