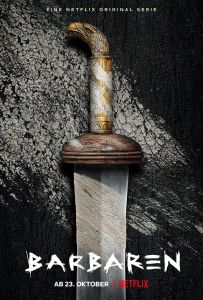 For a while now, I’ve found that I cannot bring myself to enjoy new films, new TV shows, and other new media, not only due to the active war on whiteness waged therein. I expected Netflix’s Barbarians to be no different, but people were talking it up and I was having trouble sleeping, so I thought, what the hell. I wasn’t quite prepared for what I saw. This may be the first series that I have, as the kids would say, binge-watched.

The story is set in 9 AD, in Magna Germania, and it concerns the events leading up to the battle of Teutoburg Forest, including the great clash itself. It follows the fates of Gaius Julius Arminius, alias Hermann the German — a prince of the Cherusci tribe raised as a hostage by Rome who went on to unite the German tribes and command them in the Battle of Teutoburg Forest, as well as his wife Thusnelda and his (fictional) childhood friend Folkwin Wolfspeer.

The series skillfully weaves together the grand conflict of domination and submission between Rome and the German tribes with the personal conflict experienced by the characters. From Thunselda’s resentment of her Roman-loving father and her quest to marry the lowborn Folkwin, to Folkwin’s struggle with his place in the world as a commoner moving among nobles, to Arminius’ inner and outer identity struggles as a German who’d been raised to be Roman, even becoming a knight (equitus) of Rome and commander of Roman cavalry, as well as his divided loyalties between his father Segimer, who gave him away to Rome as a hostage, and his step-father, who in this dramatization is made out to be none other than Publius Quinctilius Varus, the historic governor of Germania.

The casting is masterfully done. Not only do the actors bring the characters, both historic and fanciful, vividly to life, but they seem to have been selected as representative of their respective nations. The German characters are portrayed by blond, blue-eyed actors. The Roman characters are portrayed by Italian actors, and indeed, few faces are as Italian as the face of Gaetano Aronica as governor Varus. Arminius is portrayed as black-haired, but pale and blue-eyed, which underscores his liminal nature, as a man who belongs both in the Roman and German world. And indeed, while there are many minor storylines and one major storyline and they’re all worth seeing, the story of Arminius is the best and most important to learn from in this series.

Having been essentially kidnapped as a child and used as a janissary by the Roman Empire, Arminius faces a conflict whether he should become what he was raised to be, a knight and a prefect of Rome, or become what he was born to be, a chieftain of the Cherusci and possibly King of Germany. Essentially, he’s given the choice presented in my previous article on two nationalisms. Each choice comes at a price. Arminius could choose his people, become their chieftain, and fulfill his destiny, but that comes at the price of achieving his full potential as a commander and statesman, which can only realistically be done within Rome as the greatest Empire in the world at the time. Or he could choose Rome, wealth, and glory, and abandon his people, severing himself forever from his roots. Each choice is painful and each entails a betrayal of a father, either the blood father Segimer or the mentor and childhood idol Varus.

Not to put too fine a point on it, but all of us are stolen from our parents by globohomo’s indoctrination machine masquerading as an education system. We are all janissaries who’ll be stolen, brainwashed, and put in service of the evil empire, and the way out is the way into the tribal life. But the tribal life means we abjure glory and greatness within the empire, meaning our greatest potential will never be fulfilled.

Having a rooted identity comes at a price. As Mishima was told by a Leftist student, to have a national identity is to be limited — and as Mishima replied, that’s okay. All of us who are here made Arminius’ choice — rather than soaring into the great imperial heavens, chasing glory and prestige, we elected to inhabit a smaller, more intimate, dare I say, cozier space. The price, of course, of imperial height are our roots, our flesh, and blood, our children, born and unborn — our lives, which are ground away into nothingness by the relentless Mammon-machine of Empire. But how is one to reach ever-higher if one is weighed down by smelly, flabby flesh?

Arminius, for better or worse, chooses the tribe. Without revealing too much, I’ll say that the final episode shows us that his choice was not risk-free, nor is his success guaranteed. But I want to address one final point.

This is a German show. It concerns an important event in the history of Germany and a German folk hero. We know little about the historic Arminius, so in the context of culture, he is a blank canvas on which the story of the German nation can be told, and indeed, 19th-century German nationalism put a spotlight on Hermann the German as a hero of the German people. But conspicuous by their absence are blacks, immigrants, homosexuals, feminists, and other nasties of modernity. It took me a while to see, but all the while I was watching the story of Germany as told by Germans, and it was a story of pride, a story of the greatness of the German people and their hero Arminius, a story of overcoming great adversity and a story of victory in battle. I was watching a romantic nationalist novel in audiovisual episodic form. This was not an old Leni Riefenstahl film, but a 2020 television series.

» Interview with George Burdi: Man Against the Modern World