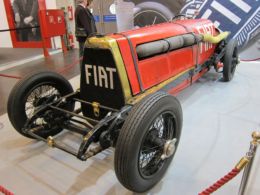 The 1923 Fiat Mefistofele, a revolutionary car design for its day which inspired the imaginations of motorists and designers worldwide.

“We declare that the splendor of the world has been enriched by a new beauty: the beauty of speed. A racing automobile with its bonnet adorned with great tubes like serpents with explosive breath . . . a roaring motor car which seems to run on machine-gun fire is more beautiful than the Victory of Samothrace.” — Filippo Tommaso Marinetti

The early twentieth century offered nothing to young, heroic men beyond a tragic war that set Europeans against Europeans and saw the pathetic preacher Woodrow Wilson clumsily rearrange a continent’s map which he had no business touching. In Europe, much blood and energy was directed into promoting Communism, the ideology that concerned itself with the plight of the “common man,” women’s suffrage, and a number of other vile notions. But Communism had something going for it: It seemed young and radical.

Then the Futurist movement appeared, conceived by an Italian, Filippo Tommaso Marinetti. His Manifesto del Futurismo was published in 1909. Futurism offered a superior alternative to Communism and to bourgeois conservatism: It was an artistic and political movement focused on velocity, violence, and ruthlessness; a dismissal of nature, tradition, and women. (Metallized flesh would take care of reproduction; Futurism called for an optimism of steel . . .) It sought destruction of the unworthy, elevation of the heroic — and essentially a “reconstruction of the universe,” as the Guggenheim’s 2014 exhibition accurately described it.

Futurism did not start out as a pan-European movement. During the First World War, Europe’s darkest hour, Italy fought Austria; Gabriele d’Annunzio, later the liberator and ruler of Fiume, dropped propaganda leaflets over Vienna from a plane. The border between Austria and Italy was drawn and redrawn with blood — yet when legitimate leaders took over in Europe, mutual respect, reason, and honor prevailed. Austria was reunited with Germany and they then formed an axis with Mussolini’s Italy and with Japan, Asia’s “flower of steel.”

Well before that, Futurism set the visual stage for Benito Mussolini’s reign. Marinetti met and aligned with him in 1914, they became friends and political comrades, and they inspired the best artists of their generation. The Futurists’ radical, daring style broke with the past and brought forward an inspiring vision. Countless names come to mind: Fortunato Depero, Cesare Andreoni, Giacomo Balla, Gianni Bertini, Andrea Crosa, Mario Sironi. Their style was characterized by angularity, urgency, and tension.

Cars for a beautiful future

Futurism and the automobile are inseparable, as the automobile is the disruptive machine par excellence, ideally an extension of the body as well as an expression of power and superiority. Free men require freedom of movement; consequently, Mussolini built the autostrada and Hitler established the autobahn. It is remarkable that those regimes had no desire to oppress their citizens’ free movement.

At the time of the Futurist movement’s emergence, the historical lineage from the horse carriage to the automobile was still evident in the latter’s design. But evolution was swift, and by the 1920s, upmarket cars were fearsome, fast, and sophisticated expressions of progress and speed. Global competition became fierce; arguably, the aesthetic landmarks were created by Italian and French carmakers.

A prime example is the brutal 1923 Fiat Mefistofele, powered by a 21.7-liter (1325 cubic inches) six-cylinder fighter plane engine. A weapon of annihilation, it inspired the imaginations of motorists around the world. Iconic cars of the Futurist era include the delicate Bugatti 35, the incredibly modern Bugatti 50, the art deco-inspired Voisin Aérodyne, and the Alfa Romeo 8C range, which had styling elements such as slats around the front grille which continue to inspire the brand’s designers to this day.

The Futurist movement came to a halt when the Duce’s regime was crushed, but its spirit prevailed in automotive racing, an area fraught with danger and masculinity to this day. Well into the 1980s, dozens of racers perished every year. They are warriors of speed, their life sacrificed to the ideals of battle and velocity.

In the 1970s and ‘80s, the term “futurism” reemerged to denote a pure, aggressively modern styling language that could be described as “progressive” — if that term hadn’t been contaminated by distasteful political connotations. The style was informed by space travel, and to a certain extent by Hollywood movies such as Blade Runner and Tron, whose aesthetics were conceived by the iconic designer Syd Mead (whose far-Right political leanings were missing from his obituaries).

In the realm of the automotive, Italy took the lead again — this time without a political agenda. Bertone, Giugiaro, and Pininfarina dismissed the voluptuous, excessive shapes of the 1950s and ‘60s. The new Italian style was cold, aloof, and superior.

Among the three major Italian coachbuilders, Pininfarina emphasized perfect proportions and elegance; Giugiaro chose hard and purist lines, while Bertone went for angularity and extravagance. There were more players, such as Michelotti and Zagato; Italian style was unsurpassed once again, and it dictated the global automotive styling language — until they lost their edge in the late 1980s. Patrick Le Quément was the first to dismiss them at Renault, empowering his own design department.

The most emblematic 1970s futuristic designs include Giugiaro’s Maserati Boomerang concept, Marcello Gandini’s Lamborghini Countach, and, to provide an example from Great Britain, William Towns’ 1978 Aston Martin Lagonda. The appeal of the cars of that era is amplified by fascinating technology: Outside of the US, where things began to go downhill from the early ‘70s, they were the last cars to be developed without stifling government regulations. In motorsports, power and style formed a congenial relationship — and created iconic cars such as the Lancia Stratos or the Audi Quattro.

Futuristic design trickled down into the mainstream. We will mention only the Alfa Romeo 75/Milano, the Pontiac Fiero, or the first-gen Acura Integra in lieu of countless other examples. Pop-up headlights, digital instruments, and voice synthesizers brought space-travel appeal onto the roads.

In the 1990s, with the advent of “organic” and retro design, aesthetics took a sharp hit, even though there are beautifully executed designs even from that era, such as the first-gen Oldsmobile Aurora or the last Mazda 929. Nissan designer Gerald Hirshberg, a Jewish-American, proclaimed the end of the “tyranny of the wedge.” But the best designers — he was one of them — still got the proportions right.

With ever more intrusive “pedestrian protection” regulation that requires fat bumper lips and raised hoods, the aesthetic line eventually crashed to the bottom, where it remains to this day. A lot of today’s cars are distasteful reflections of society: They look either simple and clownish, with big and awkward smiles — or they appear to be seething with rage, displaying a vulgar lack of restraint.

Yet there are notable exceptions and better stylistic takes. That Lexus grille that looks silly on their SUVs fits the ultra-modern LC 500 Coupe perfectly. And while Audi’s exterior design is overly busy, the glass surfaces of the dashboard ooze perfection. Or consider the next-generation Hyundai Tucson, a futuristic design far superior to the unintelligent look of many other SUVs with their “friendly but tough” aesthetic.

Tesla’s Cybertruck takes the new futurism to the extreme, although it lacks tension and is ultimately a poor execution of a great aesthetic approach (putting aside the consideration that EVs are essentially a grift powered by left-wing propaganda).

Many of us spend more time in our car than anywhere else. Driving is far less of a pleasure than it used to be, and that is just another thing that has been taken away from us. But a car can still be a beautiful space — a vessel of speed and superior aesthetics. Every futuristic design out there is a promise of a beautiful, pure future — a future that we never got. Not yet, anyway.