Preparing for the Midterm Elections . . . & Worse to Come 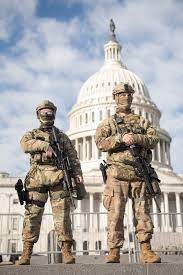 De facto secession has already begun in America. Nationalist whites and non-globalist corporations are leaving blue states in droves for redder pastures. Former battleground states, such as Ohio and Iowa, are now reliably MAGA, and most MAGA states are increasingly so. Likewise, the gulags of California and New York more resemble their quondam Soviet counterparts with each passing day. De jure secession will take some time, but if history teaches us anything, it is that political changes occur functionally before they are recognized and ratified legally.

One of the main stumbling blocks to achieving our political goals is a sentimental attachment to an America that no longer exists and will never exist again. The American experiment has failed, and it is now time to form the basis of a new political arrangement. White people have become enslaved by liberal democracy, and we must embrace the freedom of illiberalism.

We deceive ourselves, however, if we think a new political structure will arise as the result of an “uncontested divorce.” Negotiations can only occur between rational parties, and our Leftist globalist opponents are anything but rational. Leftism is not so much a political ideology as a mental disorder. The Leftist worships at the altar of perversion and abnormality. The Leftist hates the family, despises biological normality, abhors beauty, and has great difficulty dealing with reality. Bereft of morality, the Leftist claims that there is no such thing as truth, and instead dissembles about multiple “truths” that are as evanescent as clouds.

The reality is that the struggle to attain our political goals will be fraught with danger and struggle. Not since 1775 or 1860 has there been a year with more potential danger and greater possibility for needed political change than the year leading up to the midterm elections taking place on November 8, 2022.

Consider the situation in which we find ourselves. The slow, steady hollowing out of America by the globalists and the Uni-Party was proceeding apace in 2016 when Donald Trump rudely interrupted the presumed coronation of Hillary Clinton. But consider for a moment what our country had endured for over five decades before.

First, there was the Lyndon Johnson’s Great Society, a cynical dismemberment of the Constitution to ensure Negro loyalty to the Democrat party and to cover up for Johnson’s disastrous Vietnam policy.

This was followed by the dim-witted Gerald Ford, who actually believed that inflation could be cured by wearing a WIN (Whip Inflation Now) button, and he was followed by Jimmy Carter’s thorough incompetence, which was so bad that he nearly lost the election to Ford.

Next came the affable but dim-witted Ronald Reagan, whose amnesty for illegal aliens turned the reliably Republican California into a Third World cesspool of street-shitters.

He was followed by George H. W. Bush, who managed to lose his reelection after attaining a 91% approval rating.

George Bush the Lesser gave us 9/11 and the Patriot Act, which annulled those parts of the Constitution that the Great Society hadn’t already destroyed.

This all led up to St. Barack Obama’s apotheosis, whose presidency was supposed to usher in an age of total racial harmony in which the lamb and lion would lie together in the field undisturbed — that is, if you define complete racial harmony as a Black Lives Matter riot.

In looking back, it is easy to see why Leftists went so berserk when Donald Trump was elected. They had had everything going their way continuously since 1963.

Being irrational and emotional beings, Leftists could not control themselves last year when they assumed power after the stolen election of 2020. They so overplayed their hand that they now stand on the brink of an electoral catastrophe of 1932 proportions. Recent polls show that the Democrats will almost certainly lose both chambers of Congress, with Republicans possibly picking up approximately 100 seats in the House of Representatives.

The Biden administration’s toxic mix of malevolence, incompetence, and ignorance has produced a perfect storm of disasters: soaring inflation; uncertain energy supplies as the winter season begins; a diminishing workforce; a supply chain so broken that some experts believe that it will not be able to be fixed until 2024; a Covid vaccination policy that has led to the vaccinated dying at higher rates than the unvaccinated (and in which the vaccinated are suffering from millions of injuries that do not afflict the unvaccinated); the criminalization of cheap and effective cures for Covid (ivermectin, hydroxychloroquine) while mandating ineffective, experimental, and dangerous mRNA therapies masquerading as vaccines; an agricultural policy that pays farmers one and a half times normal subsidies as long as they destroy their crops (while simultaneously having two million additional illegal alien mouths to feed); Third World-style lawlessness in Leftist-controlled metropolitan areas; a devastated military that is no longer capable of defending the country; a Department of Justice that views parents who attend school board meetings as domestic terrorists but supports Antifa and BLM; and an FBI that should be renamed the KGB.

Indeed, the Biden administration is mortally wounded, and that is what makes it so dangerous. Do not believe for a moment that the Left will politely give up the power that they stole in 2020. Consider what the Left did to gain that power in the first place. We now know that Anthony Fauci funded the gain of function research at the Wuhan lab where the Covid-19 virus was created. The virus was then unleashed by the Chinese Communist Party (CCP) to disrupt the 2020 elections — whether this was “accidental” or intentional makes no difference. The Leftists in America exploited the pandemic as an excuse to bring in mass mail-in balloting with no signature verification, thus enabling mass voter fraud. As a result, we have a President who is literally non compos mentis and whose entire family is compromised by the CCP, leaving him easily controlled by his globalist and CCP handlers.

We must therefore anticipate what the Left will do in the run-up to the 2022 midterm elections. There is no doubt that they will try another round of lockdowns, not only to harm the white middle class economically but also to provide another excuse for massive mail-in balloting. This may not work, as there is greater and greater pushback against lockdowns, and states with harsh restrictions are showing the highest rate of infections while states with few or no restrictions are showing the lowest.

Nevertheless, it seems that the Left has another pandemic in mind. Bill Gates has been suggesting of late that there is a possibility for a smallpox outbreak. Curiously, the federal government has just made a $113 million purchase of the obscure smallpox drug Tpoxx. Smallpox, however, was eradicated almost a half century ago, and the only remaining samples of it that exist are kept at the Centers for Disease Control lab in Atlanta, as well as its Russian counterpart. Does anyone really doubt that the anti-white genocidal regime in power would have any qualms about unleashing the smallpox virus on the population? Imagine the kinds of lockdowns the Biden regime could instigate.

The lethality of a smallpox outbreak could also lead to calls for canceling the 2022 election, and this would be supported by the institutional Republican Party, which would do anything to prevent the final MAGA takeover of the party. Since the only other samples of smallpox are controlled by the Russians, the Biden regime could blame the Russians for the outbreak — thus supplying the neocons with an excuse to go to war.

We can also expect that the Biden regime will make further attempts to restrict white people’s civil rights. Even though the vaccination mandates appear on the road to being completely overturned by the courts, the Leftists are still in control of the Department of Justice, the FBI, and the IRS. We should expect greater lawfare in the coming year against churches, Christians, gun owners, home-schoolers, PTA members, veterans’ organizations, registered Republicans, and small business owners. The Biden regime may also attempt to harass anyone who has stated an opinion online that opposes the Leftist narrative. VPNs are going to be essential for internet usage, since regime monitoring of dissident computer usage will undoubtedly increase. Also remember that the Patriot Act permits the federal government to monitor library usage. When possible, avoid American libraries. It is safer to purchase dissident books and share them with your like-minded friends in samizdat form.

The economy is so fraught that it could collapse at any time. We are at the beginning of a horrible period of stagflation, in which wages remain static or fall while inflation increases rapidly. If you lived through the Jimmy Carter years, you’ll know the true meaning of the “misery index.” It is vitally important that all on the Dissident Right get their finances on a firm footing and reduce debt. Money printing by the Federal Reserve is going to continue unabated given Jerome Powell’s reappointment to the chairmanship and the fact that the Fed cannot reduce inflation by increasing interest rates. A one-point increase in interest rates would make it impossible for the Treasury to cover the cost of servicing the national debt.

The disruptions to the supply chain are deeper and longer-lasting than the Biden regime is admitting. Likewise, agriculture throughout the world is in deep trouble. Demand for food increases as supply diminishes. Harvests throughout the world have not been great this past year, and many crops are rotting in the fields due to the artificial labor shortage created by the Biden regime’s disastrous economic policies. Members of the Dissident Right should be stocking up on shelf-stable food supplies that can last at least a month at minimum; a year’s supply is ideal.

Be very cognizant of the secondary and tertiary effects of supply chain disruptions. It’s not just the lettuce from South America that will disappear from the shelves. A disruption of spare parts causes machinery in America to stop working, thereby reducing the amount of products that can be manufactured domestically. The lack of a single small part can cause the most complicated piece of machinery to stop working. Your $80,000 BMW won’t run if doesn’t have spark plugs; even your Leftist neighbor’s electric Wokemobile won’t run if he can’t get batteries from the Chinese Communist Party. Members of the Dissident Right need to stock up on any parts or commodities they might need in the coming year.

Finally, as the Biden regime sees its power evaporating, it will encourage and support more Antifa and BLM violence. If you can, relocate to a less “vibrant” area. In general, de-negrify your life. The more de facto racial separation we attain, the easier de jure racial separation will be to accomplish. It is also important that nationalist whites separate from Leftist whites. Negroes are the poison, but white Leftists are the poisoners. Remember, without Leftist white district attorneys, Darrell Brooks is just another Negro hood from da hood sitting in jail — not a mass murderer.