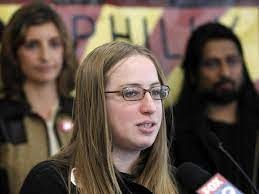 Twitter just handed the ultimate censorship weapon to Nazis. Under the new “privacy policy,” Proud Boys are reporting valid research, like documentation of public rallies by violent white supremacists. And Twitter is forcing us to choose between suspension and research deletion. — Gwen Snyder, antifa double agent secretly working for the Red-Brown Alliance

I have never been happier to lose an office pool than right now. See, here at the Counter-Currents office, we had a pool going as to which group would be the next target for mass Big Tech censorship. I had the Dirtbag Left. Goad had the TERFs. Poor Jeelvy got to pick last and got stuck with the Flat Earthers.

It looks like Big Tech threw a pleasantly surprising curveball at us, as it seems the next group to get hit with the ban hammer is . . . 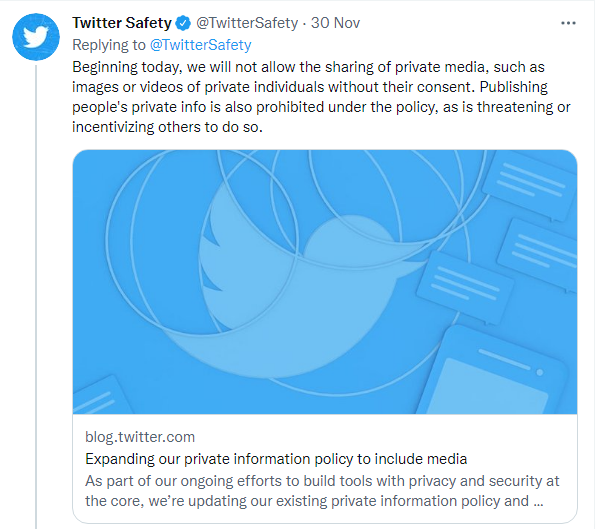 Before I continue, let me caution against getting your hopes up too much. A few months ago, a group called Right Wing Watch had their YouTube channel banned. People celebrated for a few days, but then the media pitched a fit and they got their account back.

Thus, there are some very positive developments unfolding, but who knows? A phone call to the right Jews might change things. But I can tell you that antifa themselves are freaking the fuck out right now.

The story began on Tuesday, November 30, when Twitter announced that they are updating their terms of service:

Beginning today, we will not allow the sharing of private media, such as images or videos of private individuals without their consent. Publishing people’s private info is also prohibited under the policy, as is threatening or incentivizing others to do so.

It sounds like a ban on doxing. Technically, doxing was allegedly already banned on Twitter, but they never enforced it. But then this statement came out of the blue, so perhaps they are serious this time. Why make an announcement that you are going to ban something that already goes against your own rules?

Let’s unpack what this means. This policy update will help curb the misuse of media to harass, intimidate, and reveal the identities of private individuals, which disproportionately impacts women, activists, dissidents, and members of minority communities.

Yes, this definitely looks like a ban on doxing. The fact that they would mention “dissidents” in this context reinforces this notion.

To be clear, we require a first-person report of the photo/video in question (or from an authorized representative). After we receive a report, that particular media will be reviewed before any enforcement action is taken.

I take this to mean that the vdox has to be reported by the doxee? That you cannot report a dox on someone else’s behalf? I think that’s what this means? Anyway, here’s where Twitter gives itself some wiggle room:

Context matters. Our existing private information policy includes many exceptions in order to enable robust reporting on newsworthy events and conversations that are in the public interest.

We will take into consideration whether the image is publicly available and/or is being covered by journalists — or if a particular image and the accompanying Tweet text adds value to the public discourse — is being shared in public interest or is relevant to the community.

There’s a lot of room for wiggling there. I mean, who are you calling a “journalist”? Would they consider me a journalist? Are the writers of antifa blogs “journalists,” or do you have to be employed by a billion-dollar megacorp to be considered a journalist?

Just on the surface, it looked like these were anti-antifa measures being taken. At any rate, I don’t see how it could hurt the Right more than the Left. Due to the social penalties that go along with being Right-wing, Right-wingers have more cause to hide their identities than Left-wingers do, so Left-wingers end up doing a lot more doxing that Right-wingers. Worst case scenario: The new rules don’t apply to us. Best case scenario: It takes down a few Lefties.

Right-wingers were naturally skeptical. These changes looked too good to be true. But of course, a few Right-wingers felt it couldn’t hurt to try. This fellow tried to report his own dox — and was rebuffed by Twitter: 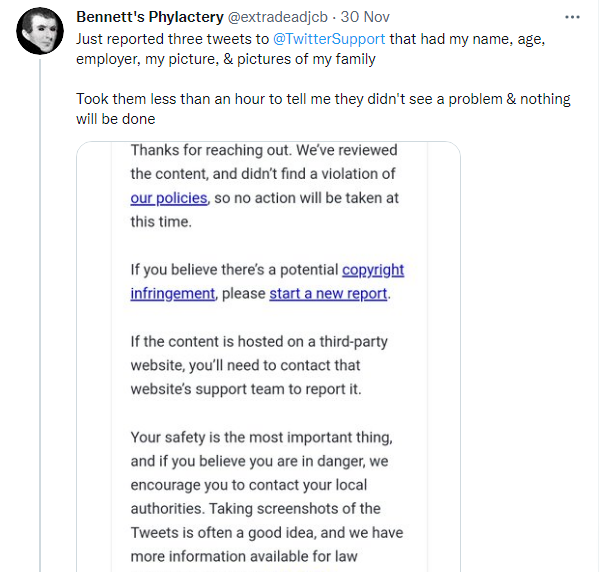 So maybe this was all a big nothing burger.

But then antifa started freaking out. 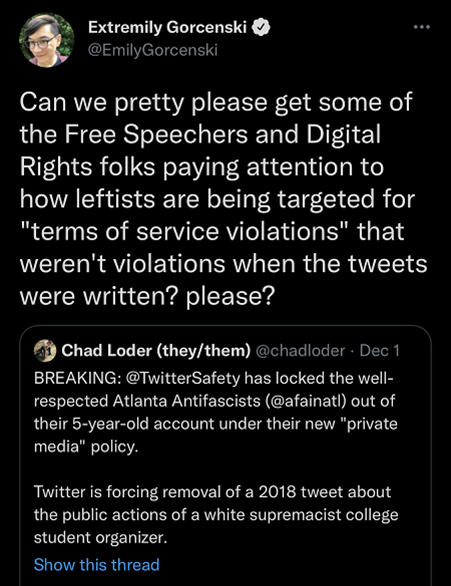 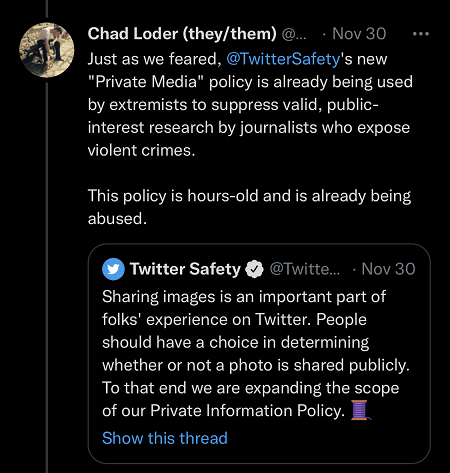 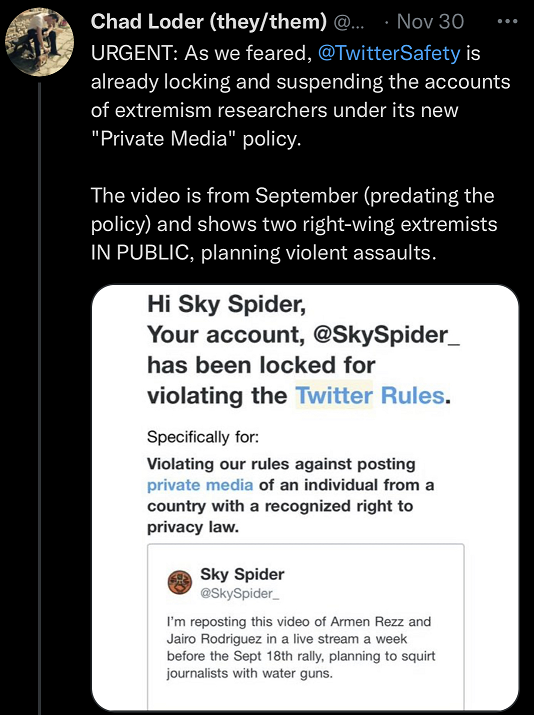 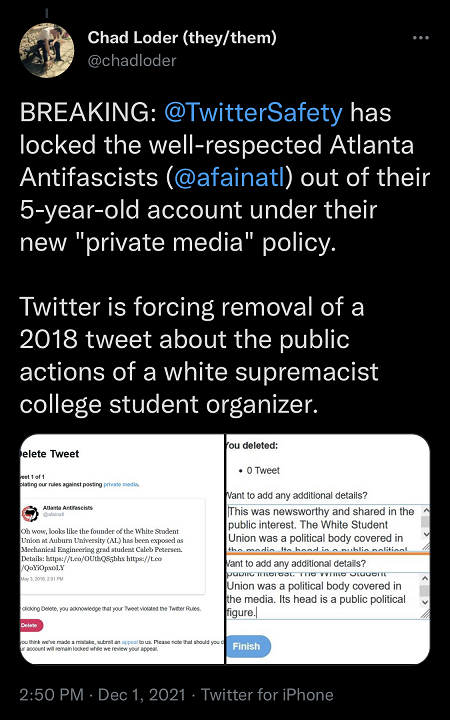 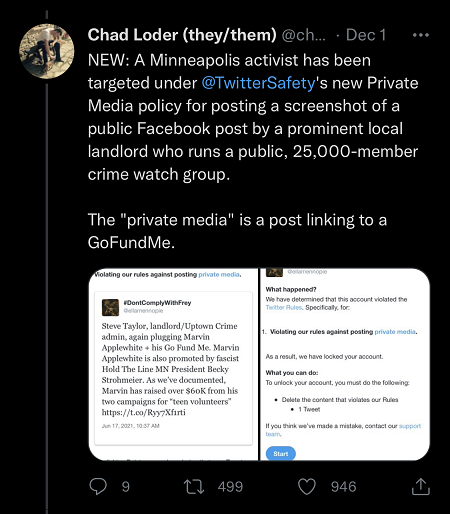 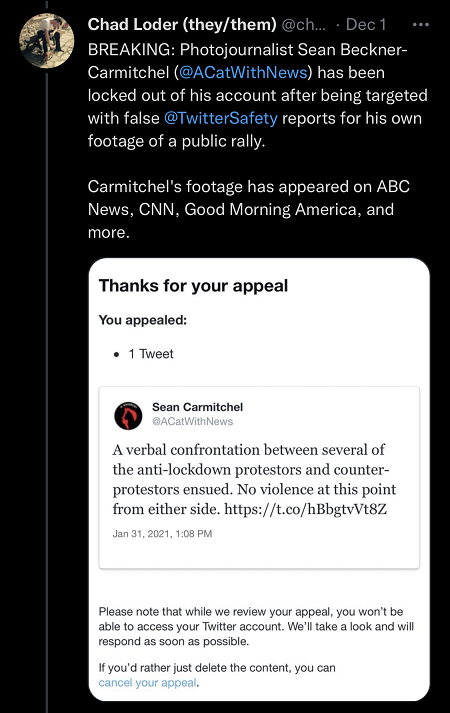 Now I’m thinking maybe something big is going on after all. Even antifa bigwig Gwen Snyder — who, as I mentioned in a previous article, is secretly working for the Red-Brown Alliance) — was having her tweets deleted. 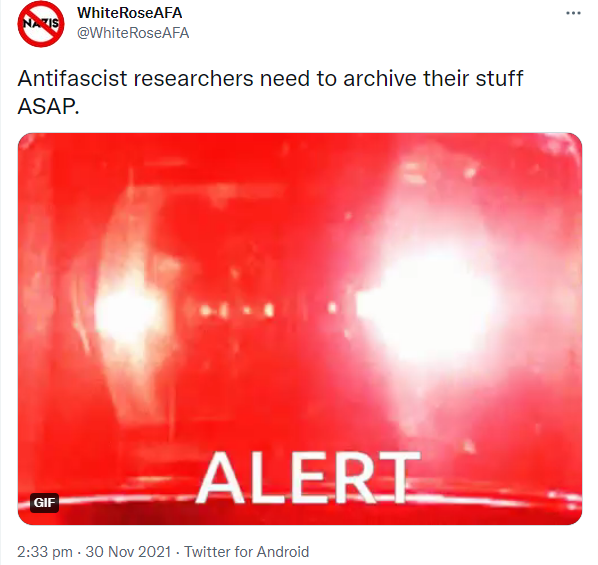 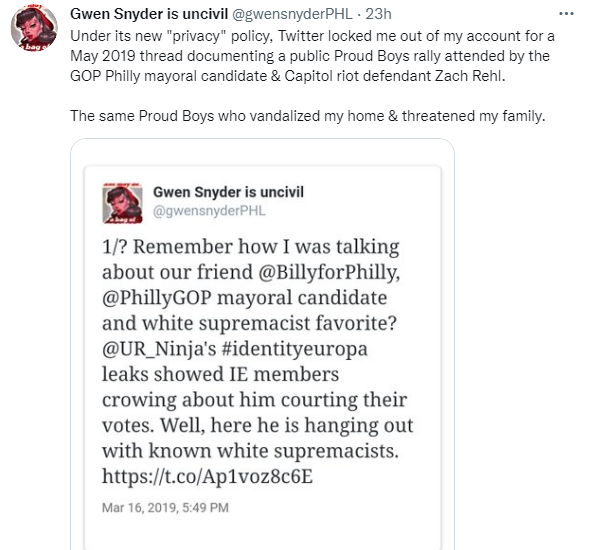 Thus, at the time of writing, a sort of antifa apocalypse seems to be underway on Twitter.

Poor antifa. They formed an alliance with capitalism — which they claim to oppose — in order to destroy their mutual enemies, and now that their mutual enemies have been purged from the internet, they are being thrown under the bus. Who could have seen that coming?

I have suspected for a while that with Trump gone, antifa have outlived their usefulness and are now a net loss to the establishment. They have a horrible reputation. White Nationalists have a bad reputation as well, but we can at least blame the hostile media and Hollywood for putting out 75 years of anti-racist propaganda for it. But as for antifa, no one knew who the hell they were five years ago, and now everyone hates them. They have no one to blame but themselves. After Charlottesville, they had Republican senators supporting them. Today, even the Democrats consider them an embarrassment — despite the fact that the mainstream media was running damage control for them.

Some of this might have to do with the lawsuit against Christ Exoo, aka Antifash Gordon. Long story short, Antifash Gordon was antifa’s top doxer. He doxed Daniel D’Ambly from New Jersey. The place where D’Ambly worked fired him after they started receiving death threats. You can read the entire story here.

Twitter were also named in that suit, because they knew damn well what Antifash Gordon was doing and nevertheless allowed him to break their own terms of service. See, Antifash Gordon’s original handle was Dox Savage. Get it? He’s like the 1930s pulp hero Doc Savage, but instead of going on adventures in far-flung exotic lands, he doxes people.

Doxing was technically against Twitter’s terms of service, however, so they could not simply allow an account to remain that had “I dox people” right in its name. But instead of banning Christian Exoo’s account, they made a special exception for him. They allowed him to simply change his handle, thus enabling him to keep all his existing followers. And thus @DoxSavage turned into @AntifashGordon. Get it? He’s like the 1930s pulp hero Flash Gordon, but instead of fighting ambiguously Asian-looking supervillains from outer space, he doxes people.

That move may come back to haunt Twitter, because by doing that, they acknowledged that they knew what Exoo was doing, and even went above and beyond their usual protocols to allow him to continue doing it. I’m not a lawyer, but I think that could make them liable as accomplices to whatever Exoo did after that.

Again, this is all speculation on my part, and who knows whether this has anything to do with Twitter’s policy change or not?  But if I were in Twitter ‘s shoes, I would want to go into that lawsuit being able to say that I have a no doxing policy, and provide proof that it is being enforced.

Again, however, I would caution everyone not to get their hopes up too high. Take this tweet, for example:

Twitter has claimed to multiple journalists at major national news outlets that my suspension was in error, but they have yet to contact me or restore the tweets they censored. 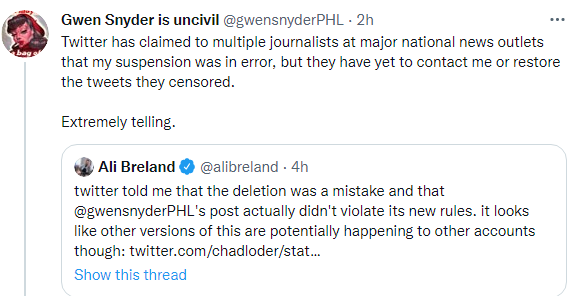 Thus, if they are telling journalists that the deletion was a mistake, that may be a sign that Twitter is intending to cuck. Or maybe not. Like I said, there may be legal reasons why they are doing this.

Time will tell, but if this sticks, it is a net gain for our side. If we can’t have Twitter, no one can!