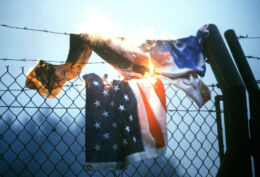 Biden’s address after the double suicide attack by ISIS-Khorasan (a probable CIA psyop asset) in Kabul was interesting for a lot of reasons. Despite being surprisingly lucid, he let slip that he had been instructed as to which journalists to call on. There also seems to be a war between establishment factions about whether we should stay in or leave Afghanistan, as evinced by how the media has been treating the Kabul debacle — combined with the fact that a CIA asset was used to sabotage the withdrawal.

However, the most pertinent aspect for me was how it came across as a backhanded insult. Biden praised the Marines who died as “heroes” and are the “backbone of this country.” Of course, he had to say something nice about them, but everything he said rang hollow. Anyone who knows anything about the Marines, and especially those in Combat Arms, knows that they are generally staunch Republicans, and overwhelmingly straight white men.

In previous decades, I would have said that domestic politics should stop at the water when we are facing a foreign enemy. However, we are not in normal times. These same men whom Biden feigned respect for are also derided as deplorables by the very same establishment that caused the Kabul catastrophe through gross incompetence in the first place. They probably voted for Trump and knew that Biden actually lost the election, which means they were considered potential terrorists by those sycophants who now call them heroes. It’s entirely possible that at least one of them had known someone who is being held prisoner as a political POW because of January 6. And before they died, they were facing mandatory or pseudo-mandatory vaccination, and there is even talk of denying the GI Bill and other benefits to soldiers who are discharged because they won’t accept the vaccine.

There’s no getting around the awkward fact that the men whom Biden praised today probably came from small towns in Red America that he would have no moral qualms about drone-striking if he could get away with it.

I admit it is generally ill manners to assume such things about the fallen. Maybe I’m wrong, and the Marines who died in Kabul were actually Democrats. While statistically improbable, it’s not impossible. However, given that 86% of the combat deaths in Afghanistan have been white men, as well as my own personal experiences, I’m fairly certain that I speak for most of them when I say: Screw Biden and his insincere compliments.

Blue Patriotism is defined by great pomp and circumstance, and speaks of high-minded abstractions. It gives lots of parades and speeches. It rambles on about “human rights” even while allowing blacks, Antifa, and the FBI to wage state-sponsored terrorism against citizens who disagree with them. It flies the American flag on federal holidays – just like how fake Christians go to church only once or twice a year for appearances. It is drinking champagne at your vacation home in the Hamptons on the Fourth of July while systematically screwing over working- and middle-class Americans. It is coddling an African savage who murdered Ashli Babbitt in cold blood. It is lecturing about the rule of law in 2021 after instigating race riots the previous year. It is waxing poetic about the Constitution while simultaneously shredding it and toppling the statues of those who wrote it. It is the religion of judges, journalists, generals, Non-Governmental Organizations, and alphabet agents and contractors. It is so full of ivory-tower hypocrisy that it makes Marie Antionette seem sympathetic by comparison.

In contrast, Red Patriotism is the sincere love of country and community that traditional Americans have. It is defined by virility, honesty, hard work, and freedom. It is about loud guns and quiet faith, fast trucks and slow-cooked BBQ. It is the land of the free because of the brave. It is where you can voice an opinion without being ostracized. At least at one time, it was where an honest day’s work earned an honest day’s pay. It cherishes family and friendship. This is the patriotism of a nice white country, and it is indeed the backbone of America.

However, Biden’s conduct shows that he sees Red America not as a laudable foundation, as he claims, but as something that is at best expendable. Oftentimes he sees it as dangerous, since he cannot fully control it.

Blue Patriotism cynically loves to take advantage of Red Patriotism. Whenever a liberal waves an American flag instead of a BLM or rainbow flag, it’s because they want something. Sometimes that thing is to demand respect for a judicial system infested with Communists; at other times to ask you to work long hours and pay high taxes so that Treyvon can buy crack. Right now, it’s waving the flag to trick virile young white men into dying for soft-handed traitors and feminist NGOs. The war cry for Jewish interests is “Onward Christian soldiers!” – and is well-known among us. Likewise, the war cry of the Jews of Blue America, whether they are biological or spiritual Jews, is “Onward Republican soldiers!”

You would think that Blue America would at least throw some scraps from the table to Red America to keep up the façade that we are all one country, and all in this together. At least they should maintain a pretense that they will keep the people and their families who fight their wars safe. However, the case of SFC Jonathan Pentland, an Army Drill Instructor, shows that the establishment is as concerned about Africans harassing women and children in a military housing neighborhood as it is concerned about Arabs blowing up white warfighters overseas.

These liars should not be attacked as hypocrites, even though they certainly are. They know this and it doesn’t bother them. This is less a case of double standards, which anyone can fall into, but of calculated exploitation. They should rather be attacked as evil manipulators who insult our intelligence and our patriotism.

Liberals waving American flags should be as mistrusted as Achaeans offering wooden horses — and despised just as much.

« A Message for Groypers