Beyond the Left-Hand & Right-Hand Paths 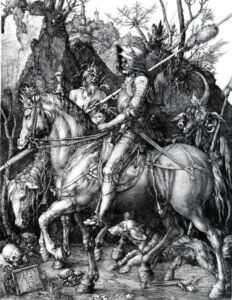 If we believe that we are living in the dark age, or Kali Yuga, then we must believe that things will only continue to get worse before they get better. We should therefore look for silver linings whenever we can find them. One such silver lining is that the traditional distinction between the Right-Hand Path and the Left-Hand Path has crumbled. This crumbling has positive implications both for esoteric initiation as well as exoteric politics, and has arguably created the possibility of a Third Path that is more suitable towards action than contemplation. Thus, while some doors have been closed to us, other doors have opened, metaphysically and politically, in the current age.

First, we should define what is meant by the Right-Hand Path versus the Left-Hand Path. The Right-Hand Path is that of following rules, rituals, and conventions. It is conformity. This applies to both metaphysical practices and moral conduct. A prime example of this is a humble monk who fervently adheres to his order’s rules and practices because they have proven efficacious for others, and who has a relationship with the divine that is passive, yearning, and subordinate.

The Left-Hand Path is the opposite. It is the breaking of social taboos with the intent of attaining spiritual liberation and self-actualization. It is rebellion. Aleister Crowley epitomizes it, and his unusual practices were so controversial that Mussolini had him deported. (Obviously, the British weren’t sending Italy their best.)

In the texts that were later published as Introduction to Magic, Julius Evola and the UR Group held that as the Kali Yuga deepens, the Left-Hand Path will become more efficacious because of a general climate of dissolution and the unleashing of unconstrained forces. A word of warning, though: for most, this path simply becomes an excuse to become “edgy” and degenerate.

For an initiate, however, both paths are equally valid. Briefly put, an initiate is someone who seeks to transcend the human condition and identify with the Absolute. Such a task is not for the timid and comes with numerous dangers. Evola instructs the initiate to “use everything and abstain from everything as you please. Become the absolute ruler of your soul.”

However, this instruction was written decades ago, and the Kali Yuga has only gotten worse since then. I am no guru, but I would argue that dissolution has become so extreme that the distinction between the two paths is breaking down. They now bleed into each other, and this presents an opportunity for a Third Path.

There are exoteric indications of this crossover. A Trad-Cath incel and a nonbinary vegan witch may hate each other, but they would hate me even more for speaking the truth that they are both arguably on the Right-Hand Path, given that both ardently follow very strict rules within a comprehensive structure. 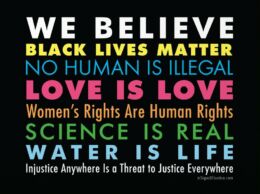 Similarly, the Right has long observed a religious fervor behind the dogma and virtue-signaling of the Left. Liberals now post their catechisms on yard signs. But there is also increasingly a transgressive streak among those who describe themselves as “trad” as well which can at times be quite comical. Thus, such a Trad-Cath is also arguably on the Left-Hand Path.

Counter-Tradition is now in full swing. Colleges push Judeo-Bolshevism under the guise of critical race theory, Jews infest the courts and subsequently have been defiling case law since the 1960s, George Floyd is worshipped as a parody of Jesus Christ, and ugliness is glorified as “body positivity.” These are all facets of counter-Tradition because each has something negative as its reference point. Others have compared this phenomenon to a fake church and priesthood. The end result is that the forces of heresy have become the new establishment. Thus, paradoxically, conformity is rebellion against the Traditional order, and rebellion — if it is to be a true rebellion — must be a return to Tradition.

While these affairs can be understood politically and culturally, there is also a metaphysical side. These heresies are caused by and contribute to a general climate of dissolution in a feedback loop in both the physical and metaphysical realms. We are witnessing the dissolution of nations, gender, culture, caste –perhaps there is also dissolution of the formerly stark divide between the Right-Hand and Left-Hand paths as well? And once this divide is dissolved, why could it not congeal into a new Third Path?

This proposed ambidextrous Third Path allows me to have my cake and eat it, too. I am by nature drawn almost entirely to the Right-Hand Path, and yet it is the Left-Hand Path which is most efficacious during Kali Yuga. On the Third Path, I can simultaneously practice and reap the benefits of both. If George Orwell is correct in proclaiming that “in a time of universal deceit, telling the truth is a revolutionary act,” then there can be nothing more transgressive — and thus more spiritually liberating — than speaking the truth in the current year.

Likewise, transmuting one’s rage at the establishment into health and fitness to forge an Olympian body is hugely transgressive against the current gynocracy. Reading white authors is tantamount to studying heretical texts, and the writings of the Radical Traditionalists such as Julius Evola can very well be seen as our Necronomicon. On the Third Path, there is all the liberation of rebellion but none of the risks of becoming enslaved to Slaanesh via degeneracy. This Third Path naturally lends itself more towards action, which is congruent with the West’s tradition of being action-orientated, as epitomized by knights errant and Greek heroes, as opposed to contemplation, which predominates in the East.

However, there is one dangerous trap that remains. The action utilized must be actively willed. It cannot be reactive, nor come about as a result of yearning. You must act lucidly. You cannot act merely in the pursuit of the dopamine rush that invariably comes when liberals get upset after you tell them that there are only two genders. To do so will metaphysically result in your enslavement to the pursuit of pleasure, and the liberal, despite his tears, is actually the one controlling you, and not yourself. If you doubt this, consider how in sex the male may be physically active, but it is the woman who dominates him with desire, and thus the man is metaphysically passive. 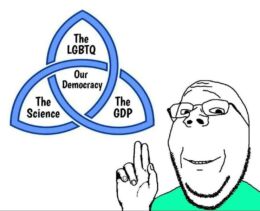 Similarly, in terms of politics, being reactive will result in you defining yourself in relation to and in opposition to the Left — and thus they are back in control of you. We have already seen what damage this passive, reactive mindset can do over the years. It has resulted in conservatives lamenting our withdrawal from Afghanistan, Sean Hannity praising the mentally deranged Bruce Jenner to “own the libs,” and Trump pardoning the hoodlum rapper Kodak Black to show that the “Demonrats are the real racists.” All of this is cringe, and all of it is nothing more than pursuing a quick dopamine rush from seeing liberals get upset.

Nobody can deny that triggering libs is fun. I freely confess that I have caused and enjoyed several deluges of liberal tears. However, any joy that comes from it should be experienced as something that you actively will. The UR Group explains it thusly:

Instead of allowing a passion to take hold, one grabs it, asserts oneself, and does so before it has time to pervade us. It is like someone who can catch a missile in midair, and is consequently unhurt by it.

Ideally, one would be able to choose whether or not he experiences joy from the liberal tears caused by his transgressions. If not, he can at least consciously partake of that joy. For those readers only interested in politics and not initiation, just keep a level head and avoid self-indulgent extremism. Harassing random normies like Baked Alaska does will not help us win the culture war any more than running a transgender candidate for governor.

The upside to the absolute darkness of Kali Yuga is this new opportunity. Through the Third Path, action may prove more spiritually efficacious than traditional methods of initiation, which require extensive study, effort, and danger. This is especially true if such action is political action, or has political overtones — such as the movement’s pivot towards self-improvement. Furthermore, some level of efficacy may be present even without extensively studying the Traditional texts — assuming that such action is carried out with the correct mindset as described above.