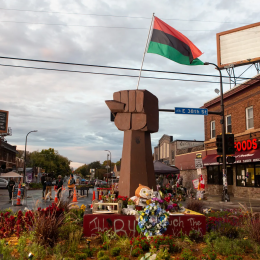 If you are contemplating a pilgrimage to the George Floyd memorial site and wondering what kind of protective body armor you should wear, consider this from CNN: “Locals wanted it [at the intersection of Chicago Avenue and 38th Street in Minneapolis] to be a place of peace, justice, mourning, and healing. There is a greenhouse growing plants for the memorial to Floyd and caretakers who make sure the area they now call George Floyd Square is clean.”

That’s the upside in a report from the “news” source we can trust to keep us informed about the ongoing deification of a guy who was a practitioner of home invasions before “systemic racism” tragically ended his career.

Here’s the downside for the “peace” hopefuls tempted by the allure of “George Floyd Square.” “But the neighborhood is still dealing with old wounds, new conflicts, and fresh violence, even as attention on them is renewed with the beginning of the murder trial for the man accused of killing Floyd.” This CNN story was released shortly before the railroading of Derek Chauvin was concluded.

Just last weekend a man was shot to death not far from the spot where Floyd once laid motionless. Police did not respond to CNN’s request for comment, but a spokesman told USA Today they faced interference when trying to come into the square that Saturday night. Residents choose when to move the metal gate that completes the street barricade, and this time it was them who took the victim to the hospital before police arrived.

So much for the whole “peace, justice, mourning and healing” shootin’ match. Something tells me that none of these are in the cards for the future of this piece of hallowed ground. They’ll have to settle for “clean.” The “fresh violence,” shockingly, was not the doing of Minneapolis policemen, so you might wonder who is doing it to whom. But since CNN reporters typically go mum about race when violence is black on black — black lives as they “matter” on the discount rack — you can draw the obvious conclusion about the ethnicities of the shooter and the victim. Here is another clue from the plucky CNN reporter: “Gang warfare is prevalent here, dating back long before Floyd died.” Expect CNN and AP soon to drop racist dog whistle “gang” from their style books to be replaced by “urban freedom fighter associations.”

Meanwhile, what about the “fresh violence”? Well, Congresswoman extraordinaire, eighty-two-year-old Maxine Waters in the throes of dementia, somehow wandered her way from California into Minnesota. There she took the occasion to threaten the Chauvin trial jurors who were in deliberation and to incite the rioters-in-waiting. She was immediately arrested and charged with multiple felonies.

That used to happen here back when the rule of law was still intact and regular law enforcement was not regarded as “racist.” Upon arrival in Minneapolis, this government-funded, one-woman, traveling carnival act demanded an armed police escort to a BLM rally whereupon she then raged against the police.

All the best to the future of the George Floyd memorial and the efforts of caretakers to keep it “clean.”

That said, however, there is another memorial that is long overdue to be erected: “The Nichole Brown Simpson-Ron Goldman Memorial (NBS-RG Memorial).” Dedicated to victims of racially motivated miscarriages of justice, this memorial would eschew the “peace, mourning, and healing” crapola that the social justice warriors use to disguise their own projects of grievance-mongering and racial animosity in order to make it sound like anything other than what it is, a casus belli.

No? The headline of the CNN story declares the location of the George Floyd memorial to be a “sacred place and a battleground” (italics added). Yes, “battleground,” I think, predicts what we are looking at, and not just for this “sacred place,” but for the whole of once safe and peaceful Minneapolis where violent crime rates have skyrocketed in the last year — committed most likely by urban freedom fighters. As Ann Coulter put it, “murders in honor of George Floyd.”

Embedded in the CNN story: “Sam Willis Jr., a business owner in the neighborhood [of the George Floyd memorial] told CNN affiliate WCCO, ‘People don’t feel safe, they are selling their homes, they hear gunshots, they know the police are not coming into the neighborhood.’” Here is an incontrovertible statement of cause and effect. Its truth plays no part in policy deliberations by woke whites for the future safety and well-being of Minneapolis residents.

The NSB-RG Memorial, it is important to note, would be neither a sacred place nor a battleground. Its purpose would be to acknowledge the real murderer of Ms. Brown and Mr. Goldman and call attention to the poisoned racial motivations and conduct that led to the colossal abortion of a trial that released O. J. Simpson to the public. It would revisit this shameful national spectacle and become a site of interactive learning with Johnnie Cochran impersonators doing seminars to dramatize the techniques of race pandering and jury nullification. It would also feature galleries with photos of the bloodstained crime scene, O. J. trying on the gloves, and video clips of the white Bronco-Police caravan. The circus courtroom antics would get special attention. For example, Cochran’s comparison of the police detective who found the bloody glove to Adolf Hitler. The jury that freed Simpson would be an object of scrutiny and an opportunity for reflection, perhaps even for mourning. “The usually dapper jury came to court [for the announcement of the verdict] in uncharacteristically casual clothes. One black man smiled at the defense team as he entered the courtroom.” The smile of racial revenge, I am thinking. Post-verdict comments would be highlighted, such as Cochran’s pious-sounding denial that he had played the race card during the trial. Erected would be a gold-framed plaque of O. J.’s promise after his acquittal to track down the “real” killer of Ms. Brown and Mr. Goldman.

“My first obligation is to my young children, who will be raised the way that Nicole and I had always planned. . . . But when things have settled a bit, I will pursue as my primary goal in life the killer or killers who slaughtered Nicole and Mr. Goldman. They are out there somewhere. Whatever it takes to identify them and bring them in, I will provide somehow.”

Yes, “somehow”. After his acquittal, O. J. was in hot pursuit of the “real” killers until he got sidetracked launching his own “home invasion” — well, the armed invasion of a hotel room, where at gunpoint he robbed the occupant. Ten years later he slithered out of prison and presumably is still pursuing his “primary goal in life.”

The NBS-RG Memorial would also feature videos of the wildly jubilant black response to the announcement of the jury’s not-guilty verdict. “Who cares if he did it? The white bitch and her Jew boyfriend had it coming,” I think was the message the jurors were sending. O. J. had merely struck a blow at “white privilege.”

As Gil Garcetti, Marcia Clark, and Chris Darden sit together processing the acquittal and preparing to face the press, they can hear the cheers in the background. Later, Clark expresses her disbelief to Darden that, “People are celebrating [Simpson], celebrating the verdict.” And, regardless of your own opinion of the verdict, it’s certainly jarring to hear and see such wild celebrations when the victims’ families are clearly in incredible pain.

Got that? “Wild celebrations,” just like after the announcement of the Derek Chauvin verdict. Is it fair to surmise that the jubilant, triumphal reaction to certain jury verdicts — Simpson, non-guilty; Chauvin, guilty — on the part of American blacks could be a primitive ritual that is racially motivated and energized with a large heaping of anti-white animosity?

On the other side. When verdicts meet their disapproval, black folks riot — as in South Central LA after four LAPD officers accused of beating Rodney King were acquitted by jury. So productive is rioting — sorry, “mostly peaceful protesting” — BLM now just threatens it, and, as we saw in Minneapolis last month, it works. No mostly peaceful protesting, by the way, by whites followed the grotesque perversion of justice with the Simpson verdict.

Following that verdict was triumphalism in spades, so to speak. A.C. Cowlings, Simpson’s buddy who led police on the surreal slow-speed chase in the white Bronco viewed by millions “was at the door to embrace Simpson when he arrived home an hour after the verdicts were read. Later, family members gathered for a champagne party on the lawn of Simpson’s lush estate. Florists, caterers, and musicians pulled up to the house and told reporters they were there for a celebration.”

It’s been almost twenty-seven years since black O. J. Simpson savagely murdered his white ex-wife and her Jewish companion. Time for their memorial is long past due. Of course, we know that it will never happen. The conclusion to the Derek Chauvin show trial is a signal that the criminal justice system is now a “criminal-run system,” the polluted backwash of systemic corruption by the white-enabling ruling class of black grievance professionals. BLM’s controlled opposition — the Congressional Republicans — expressed “relief” at the verdict, according to PBS. What else would you have expected of these extravagantly cosseted, high-placed betrayers?

They have sowed the wind. When you observe the unfettered BLM in action, you know the whirlwind is upon us.