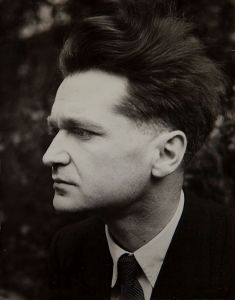 Emil Cioran was a Romanian philosopher. Cioran was born on April 8, 1911 in Rășinari (Transylvania, then part of Austria-Hungary and today part of Romania) and died stateless in Paris on June 20, 1995. A nationalist writer in his youth, after the Second World War he achieved fame as a French-language author of essays and aphorisms of a markedly dark and apparently nihilistic bent.

You have it bad. We’ve all had it bad for a long time. Emil Cioran would claim we have it bad since Creation. Imagine the bitter Job of an empty universe, one who does not even have a deity to hold responsible for the travesty, and you have Cioran.

Cioran is never more himself than when condemning the whole enterprise of being in vituperous essays and melancholy reflections. In accord with this outlook, Cioran did not have children, though this may be a mere philosophical rationalization for Cioran’s inherent and incorrigible laziness — he was a lifelong bum.

A patriotic, health-conscious régime would be well within its rights in banning Cioran’s voluminous works from the bookshops as the corrosive scribblings of an insomniacal bipolar bookworm, though he could perhaps be tolerated in academic specialists’ libraries and underground samizdat, where any damage would be limited.

For all that, Cioran’s work remains relevant for men of the Right and patriotic Europeans. He provides a visceral dissection of decadence and, in his youthful writings, tentative outlines of the kind of vitalist politics that might redeem the West. Like his compatriot Mircea Eliade, Cioran was profoundly disturbed by the Bolshevization of his nation during the Second World War and the white race’s collective suicide through civil war and moral collapse.

His later, less politically incorrect writings provide a model of lucidity, of authenticity, of getting on amidst a world that has irretrievably fallen into decay. In considering our own nations and civilization, Cioran invites us to be ruthlessly objective.

Cioran was downright contemptuous of conservative Romanian nationalists’ exaltation of peasant folk culture and felt Orthodox Christianity to be, at best, sterile. These attachments were but coping mechanisms in the face of Romania’s complete historical insignificance in comparison with the great nations of Europe. His ethnographic description of the strengths and foibles of Romania’s various tribes and territories rings as true as ever.

And Cioran brings the same insightful objectivity to bear on other nations and ideologies: the clinical analysis of Italian Fascism, knowing infatuation with the explosive power of Hitlerism, and above all a cruelly exquisite autopsy of France — the forerunner nation who proves by her pathetic historical trajectory the corrosive vanity of mere reason.

And if we can fault Cioran for being hopeless, you may thank him for leaving you copeless. At least, you will not be inclined to make any more excuses.

Cioran is an education. With him you will walk among the summits of Western thought, meandering through philosophical and religious heights from hallowed Antiquity to contemporary nihilism. Cioran is one way of imbibing the analyses of Nietzsche and Spengler, the insight and folly of the French moralist tradition . . . and, why not, perhaps a touch of Romanian wisdom.

Cioran is a challenge: for his same acerbic gaze is brought upon not only civilizations and nations, but our individual existence too. This is the demotivational Cioran.

You may find Cioran deflating, or simply annoying. Put him down. Or, you may find the flickerings of his mind stimulating. The example of his freedom, like Ezra Pound’s, is nothing if not artistic, and may inspire you to new forms and pathways.

Whatever you do, do not stagnate. Yukio Mishima found all the rules for life he needed in Hagakure, finding that La Rochefoucauld’s acerbic observations left only “a bitter aftertaste.” Pessimistic lucidity must be a salutary phase, a moment of melancholy insight in a greater movement, the prerequisite for preparing the newer and the truer. Above all, Cioran provides a monument of authenticity.

A man once said: from the filthiest puddle the purest lotus flower may spring — and Lord knows this Transylvanian makes for fine manure.

The bulk of Cioran’s French-language works have been translated into English. The two most famous ones are the essays and aphorisms of his Brief History of Decay (1949), which ensured his fame, and The Trouble with Being Born (1973). Overt opposition to decadence and concern with Western nations are subdued and/or occasional in these works.

The dialectic between vitalism and nihilism is more obvious in his youthful works, written in Romanian. Of these, there is a powerful trifecta of national portraits. La Transfiguration de la Roumanie is the closest Cioran has to a political program and includes comments on Romania’s German, Jewish, and Hungarian national minorities (which were removed from later Romanian editions). Apologie de la Barbarie is a collection of articles mostly dating from Cioran’s time as a student in the Third Reich, with eyewitness testimony and trenchant commentary on Hitlerism. The long-unpublished De la France, a small work, is a profound meditation on French history, culture, and literature, a kind of a love letter-cum-desecration of the onetime Grande Nation.

To learn more about Cioran, read these pieces on Counter-Currents:

« Republicans Should Stop Pandering to Blacks