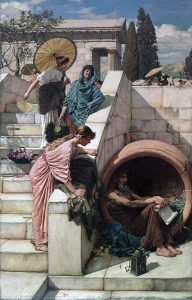 One cannot know what a man must lose to have the courage to defy all conventions; one cannot know what Diogenes lost to become the man who allowed himself to do everything, who turned his most intimate thoughts into acts of a supernatural insolence, as would a god of knowledge, at once libidinous and pure. No one was more frank; an extreme case of sincerity and lucidity, as well as an example of what we could be if education and hypocrisy did not restrain our desires and actions.

“One day a man had him enter his finely furnished home, and told him: ‘Above all do not spit on the floor.’ Diogenes, who wanted to spit, sent his spit to the gentleman’s face, while shouting that this was the only dirty place he had found where he could do it.” (Diogenes Laërtius)

Who, after having been hosted by a rich man, has not wished to have oceans of saliva to spill over all the proprietors of the Earth? And who has not swallowed up again his bit of spittle out of fear of spitting in the face of a respected and pot-bellied thief?

We are all ridiculously prudent and timid: Cynicism was not learned at school. Nor pride.

“Menippus, in his book entitled The Virtue of Diogenes, tells of how he was made a prisoner and sold, and of how he was asked what he could do. He answered: ‘Command,’ and shouted to the herald: ‘Ask then who would like to buy a master.’”

The man who confronted Alexander and Plato, who masturbated in the public square (“By God, if only it were also enough to rub my belly to no longer be hungry!”), the man with the famous barrel and lantern, and who in his youth was a currency counterfeiter (is there a higher honor for a Cynic?), what experience must he have had of his fellows? – Certainly the same as all of us, with, however, this difference, in that he made man the sole matter of his reflection and of his contempt. Refusing to suffer the falsifications of any morality or metaphysic, he worked to strip man down to show him to us more naked and more abominable than had the comedies and the apocalypses.

“Socrates become mad,” so did Plato call him. – “Socrates become sincere,” that is what he should have been called, a Socrates giving up on the Good, on phrases, and the polis, finally become solely a psychologist. But Socrates – even when sublime – remains conventional; he remains a master, an edifying model. Only Diogenes proposes nothing; the foundation of his attitude – and of the essence of Cynicism – is determined by a testicular revulsion at the ridiculousness of being human.

The thinker who thinks without illusions on human reality, if he wishes to remain within the world, and if he eliminates mysticism as an escape outlet, arrives at a vision in which wisdom, bitterness, and practical jokes are mixed; and, if he chooses the public square as his space of solitude, he deploys his verve to rail against his “peers” or to take his disgust for a stroll; a disgust which today, with Christianity and the police, we can no longer allow ourselves. Two thousand years of sermons and penal codes have watered down our venom; what’s more, in a busy world, who would stop to answer our insults or delight in our barking?

That the man who best knew human beings was nicknamed the dog proves that at no time has man ever had the courage to accept his true image, and that he has always bluntly censured the truth. Diogenes eliminated in himself all posing. What a monster in the eyes of others! To have an honorable place in philosophy, one must be an actor, respect the rules of the game of ideas, and get all worked up about false problems. In no case must man as he is be your business. Again, according to Diogenes Laërtius: “At the Olympic games, the herald having proclaimed ‘Dioxippus has defeated the men,’ Diogenes responded: ‘He has defeated only slaves, men are my concern.’”

Indeed, he defeated them as no one else has, with more fearsome weapons than those of conquerors, he who only owned a knapsack; he, the least propertied of all beggars, a true snickering saint.

We must be thankful that, by chance, he was born before the coming of the Cross. Who knows if, grafted onto his detachment, some unhealthy temptation for a superhuman adventure would not have led him to be a generic ascetic, later canonized and lost in the mass of the blessed and the calendar? Then he would have become mad, he who was the most deeply normal being, given that he was distant from any doctrine. He was the only one to reveal to us the hideous figure of man. The merits of Cynicism were tarnished and trampled upon by a religion opposed to the self-evident. But the time has come to oppose the truths of the Son of God with those of this “celestial dog,” as he was called by a poet of his time.