If I Were Black, I’d Vote Democrat 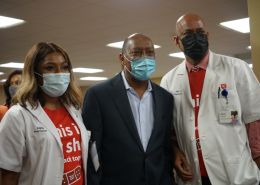 Mayor of Houston, Sylvester Turner, at a vaccination drive.

Lipton Matthews has advised Republican politicians to stop pandering to black people. Of course, he’s correct. Any Republican politician who wants to win elections would be well served by reading Matthews’ recent Counter-Currents article. His argument boils down to white Republicans failing to consider the “collectivistic mentality of black people” while counting on them to respect individual empowerment as much as white people do. He further explains how the “cult of black victimism” makes blacks unreceptive to Republican messages of self-reliance. For evidence, he points to Donald Trump’s recent failure to make significant gains among blacks after pandering to them with his ill-advised Platinum Plan. Therefore, the GOP should forget about blacks and “focus on increasing their popularity among white voters.” The Sailer Strategy, in essence, but with a novel twist — instead of showing why appealing to whites is a recipe for success, Matthews shows us why attempting to appeal to blacks is doomed to fail.

If not for its overt racial awareness and unflattering assessments of blacks, this is the kind of article that would appear in mainstream conservative publications such as the Washington Times or American Greatness­. Instead, Counter-Currents readers are treated to based observations such as this one:

Intellectual eccentricity is incompatible with black culture. White men have a burning desire to topple orthodox assumptions — not blacks, who conform to the culture of their group. So, we should not expect them to think for themselves and choose political parties based on individual goals.

I wonder, however, if we understand the fundamental motivations behind black Democratic voters and white Republican politicians — two rather pathetic ships forever passing in the night. Why do blacks consistently vote Democrat, and why do white Republicans keep on pandering to them? Both actions never fail to fail, yet are never abandoned. Why?

We’ll tackle the easier question first. White Republican politicians pander to blacks because winning is less important to them than paying obeisance to political correctness and not being dragged too badly through the mud by the mainstream media. In effect, most white Republicans are conservative liberals, who, gun to head, would stand with far-Left Democrats before having truck with anyone on the Right who stands for America-first populism (i.e., the interest of whites). We should never assume that white Republicans want to win this badly to begin with. They don’t. These days, they would rather lose than explicitly discount the black vote or admit to pandering for the white one.

As for why blacks vote Democrat, Matthews explains that blacks vote as an expression of racial solidarity, and Democrats more than Republicans reinforce this solidarity by propping up the myth of black “victimism.” One can infer that all the freebies and privileges Democrats lavish (or promise to lavish) on their black voters is an attempt to alleviate this victimism. Seemingly inherent to this perspective, however, is that blacks are doing the wrong thing by voting Democrat. According to Matthews, they are behaving like children. Here is he is at his most cutting:

To numerous blacks, voting for Republicans contradicts black culture. Republicans are targeting adults, and the mentality of blacks puts them in the category of children. Choosing a political party on the basis of identity is quite childish. At some point, one must become an adult and transcend the tribalism of the group.

Now, a charitable interpretation would be that it is childish only when blacks vote according to their racial identity, but it’s okay for whites to do it. On the other hand, Matthews could mean that anyone who votes according to their identity is being childish, including, I would have to assume, most of the readers and writers of this website. Therefore when I state that I would stand with a white-friendly socialist party over a white-hostile capitalist one — even if it means cutting my income in half and reducing my standard of living — then I would be acting childishly. I would be childish if I place the long-term interests of my people over the short-term interests of yours truly. Really? I’m sure the Counter-Currents readership would look forward to Matthews’ clarifying his position on this matter.

Contrary to common opinion, however, perhaps we should float the idea that blacks are doing the right thing by voting Democrat, and that they’re not being childish at all. If I were black, I’d vote Democrat. Here’s why: Politics is tribalism. People amass in tribes based on common needs and interests. When you have enough people, you have tribal identity. Race runs deepest, of course, but class, religion, geographic region, and gender can also form potent identities. Often, identity hegemony takes the form of territorial control, almost in an ecological sense. We see this when certain racial or ethnic groups take over a neighborhood, town, or city. Urban blacks vote Democrat because Democrats, especially the black ones, guarantee that blacks will hold on to the territory they already have. This also affords black leaders a measure of prestige on the national stage, which is a source of pride for ordinary blacks (as are black millionaire celebrities and success stories — don’t believe Matthews on this one). That most of the time these black leaders are self-serving, venal, and incompetent is unfortunate, and so is all the crime, poverty, drug addiction, and unemployment that invariably occur on the watch of black Democrats. But it still beats the alternative of voting Republican.

Why? As I have stated before:

Because if some clever white Republican were to become mayor of Detroit, what would he do? He’d lower taxes, root out corruption, get tough on crime, et cetera, until Detroit actually becomes a nice place again. And then what would happen? Non-blacks would return to Detroit and crowd the blacks out of all chambers of power. Such a turn of events may improve the lives of blacks as individuals (with lower crime and unemployment, and more efficient public works, for example), but their control over territory as a group would be drastically reduced.

So this basically boils down to territory. Without territory, no self-identifying group can survive, and nothing would reduce the square mileage of black-controlled territory faster than some block-headed white Republican who’s read too much Milton Friedman. Since American blacks are loyal first to their own diaspora, they vote for the one political party that, through a combination of largesse and negligence, assures them territory. To put it crudely, blacks vote Democrat because Democrats look the other way while they shit the bed. And nobody wants to live with people who shit the bed. That way, it remains their bed.

This is not to say that Republicans should pander to blacks by making explicit what the Democrats currently keep implicit. Promising blacks their own autonomous territory in North America plus freebies every month in return for leaving everybody else alone may sound nice (West Wakanda, anyone?), but it’s hardly realistic. Blacks would have to trust whites to keep the long-distance gravy train running to agree to such a proposition. And they won’t willingly do that.

This is also not to contradict Lipton Matthews, who’s correct about the cult of black victimism, and absolutely correct about the black collectivist mindset. I just think it is important to understand that the victim mentality of blacks is not the fundamental reason why they vote Democrat. You can take victimism out of the equation, and the majority of blacks would still prefer the worst Democrat over the best Republican. But you can’t take territory out of the equation. In multi-racial societies, territory runs as deep as race.

This means that blacks will never vote in the interests of whites. This also means that we should start preparing now for the day when white Republicans pandering to their own kind won’t be enough.

» For the Paywall Page