Republicans Should Stop Pandering to Blacks 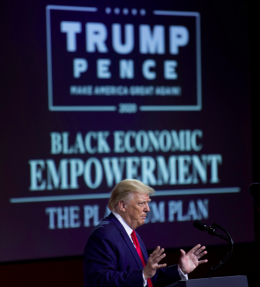 Contrite acts can never endear the Republican Party to black Americans. For decades, Republicans have naively assumed that blacks will reward them with competitive support for their energetic pandering and they are yet to reap the fruits of their labor. Republicans are unwilling to accept that for black people, voting is an expression of group solidarity. Racial solidarity is crucial to the identity of black Americans and voting for Republicans violates this sacrosanct bond. Failing to uphold sacred traditions in the black community results in severe social ostracism for dissenting voices.

Though blacks identify as conservative, they remain loyal to the Democratic Party to the bewilderment of analysts. However, this predicament only disturbs those who are unable to acknowledge the collectivistic mentality of black people. To black Americans, voting does not aim to empower the individual — it instead promotes the interests of the group. So, if blacks believe that Republicans are hostile to their goals, then they will vote for Democrats, even when policies advertised by the Democratic Party may prove to be detrimental to their economic wellbeing.

Moreover, black voting patterns cannot be divorced from the cult of black victimism. Black activists and liberal whites would want us to believe that blacks are victims of white racism. So, invariably, the self-help message of the Republican party is incompatible with black victimism. As such, Republicans find it difficult to appeal to black voters, because they view themselves as victims of a white capitalist power structure.  Unlike the radical separatism of Huey Newton and the Nation of Islam, black victimism functions as a group adaptation mechanism allowing black activists to impose demands on the state.

Black separatists are usually maligned by the mainstream, but their vision is more liberating than black liberals and their white companions. Separatists want black people to be free from white institutions, whereas liberals envision a society where whites are responsible for uplifting blacks. Although as advocates of capitalism, Republicans differ in their medium for empowering blacks, like separatists they advocate black autonomy. But because blacks are collectivistic, and they have been socialized by the wider culture to imagine themselves as victims, then preaching the message of self-reliance to black Americans is a futile project.

Presenting the Republican Party as an instrument of empowerment is a losing strategy. On the other hand, neither will Republicans gain the respect of black voters by arguing that their policies can boost the living standards of black Americans. The truth is that victimism is intertwined with the politics of black solidarity, so unless Republicans abandon the message of self-help, blacks will never perceive them as an attractive option to Democrats. Furthermore, Republicans also fail to generate widespread support when they embrace stances that are consistent with the outlook of black Americans. For example, black Americans favor restricting legal immigration — more than any other group — and although Trump garnered more votes in 2020, he did not obtain enough to retain the White House.

To numerous blacks, voting for Republicans contradicts black culture. Republicans are targeting adults, and the mentality of blacks puts them in the category of children. Choosing a political party on the basis of identity is quite childish. At some point, one must become an adult and transcend the tribalism of the group. Without being aware, blacks are ensuring that politicians treat them like infants. Also quite disturbing is the reality that the beneficiaries of victim culture are affluent blacks. Quotas for black people benefit upper-class black Americans who would have achieved in the absence of affirmative action.

If ordinary blacks knew that diversity initiatives disproportionately favor upper-class blacks, they would cut ties with the cult of black victimism. Black victimism as a group adaptation strategy has only been successful because ordinary blacks have been deceived into believing that affirmative action benefits the entire race. Surely when blacks recognize that the richest 10 percent of black Americans control 75.3 percent of all wealth owned by African-Americans, they will no longer embrace racial solidarity.

Similarly, telling them that rich blacks are 1,382 times richer than poor blacks must force black Americans to question the sincerity of activists who decry the racial wealth gap. The plight of poor blacks is paraded by black intellectuals to justify their privileges at the expense of all Americans. Black activists fear independent black Americans, since they pose a risk to their material interests. If blacks eschew victimhood, then activists cannot use their condition as a tool to extract resources from white institutions. Clearly, such circumstances obviate the services of activists who are handsomely paid to design anti-racist policies.

However, expecting blacks to disavow the cult of victimism is wishful thinking, so the chances of Republicans earning a sizeable chunk of their support will always remain slim. Blacks think like a group; hence they are unlikely to deviate from the norm. Intellectual eccentricity is incompatible with black culture. White men have a burning desire to topple orthodox assumptions — not blacks, who conform to the culture of their group. So, we should not expect them to think for themselves and choose political parties based on individual goals.

Republicans should focus on increasing their popularity among white voters. Obviously, a few intelligent blacks may embrace the party’s agenda, so there should be no reason for pandering. The culture of the Republican Party is in direct opposition to the cult of black victimism, so energizing the white base is a more fruitful alternative to courting black people who are uninterested in the message of Republicans. Additionally, giving a platform to pseudo-black conservatives or black entertainers to recount the role of Democrats in creating the Ku Klux Klan or fostering racism is sheer stupidity. Such gestures reflect the playbook of Leftists who discredit one’s individuality by appealing to his race as a motivator for political action.

Republicans are wasting time by targeting black voters. The defeat of Donald Trump should inform them that pandering never works. Donald Trump marketed himself as a lover of black people, and they still voted against him. Building a populist white agenda is a better option for electoral success, as Trump showed us in 2016, than courting blacks who will never provide Republicans with substantial backing.

« London: No City for White Men